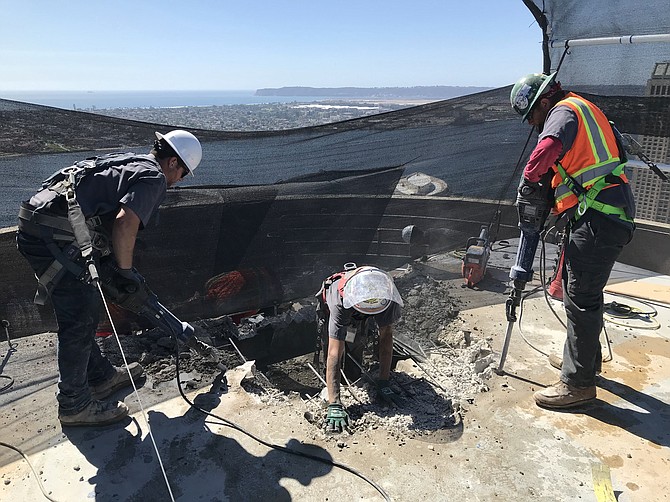 Helicopter landing pads built for emergency evacuation from the twin towers of the 41-story Harbor Club on San Diego’s waterfront are being removed to comply with state safety standards.

The helipads have never been used since the Harbor Club opened in 1992. They were never approved by the Federal Aviation Administration (FAA), said Angie Kilty, president of the Harbor Club Homeowners’ Association.

Removing them along with other upgrades to bring the buildings up to code governing fire response and emergencies in high-rise buildings will cost about $7 million, Kilty said.

To remove the helipads, workers with Cornerstone Managing Partners had to form bucket brigades passing five-gallon orange buckets filled with concrete and steel debris hand-to-hand from one person to the next down seven flights of stairs to get to an elevator, said Tom Brooks, the company’s founder and CEO.

“We basically would cut it up, break it up and put it in buckets, cap the buckets, then haul it down,” Brooks said. “You have guys going up and down stairs all day long — a guy on every landing, take two steps, three steps, pass the bucket.”

In all, Brooks figures workers broke up and hauled away 97,260 pounds of steel and concrete from the west tower, bucket-by bucket, at 5,000 pounds to 6,000 pounds per day.

About the same amount of debris will be removed by bucket brigades from the east tower.

The problem in removing the debris is that the main elevators in the buildings only go up to the penthouse units in both buildings, Kilty said.

Elevators from the penthouse condos to the roof are inside the units.

“To get the elevators to the rooftop, you’d have to go through homes,” Kilty said, and hauling construction debris through someone’s living room was not acceptable.

Until 2015, the helipads were a sort of a benign presence.

Everything changed that year when state officials put the homeowners’ association on notice that the window washing and rooftop maintenance system violated safety standards.

The result was that the windows on the glass towers that boast some of the most breathtaking 360-degree views of the waterfront in downtown haven’t been washed since the association and Cornerstone Managing Partners started looking for a solution in 2015.

“They’re pretty dirty,” Kilty said, likening the appearance to a car windshield that is splashed with dirty water by passing cars.

New building maintenance systems which use cranes couldn’t simply be installed atop the helipads because they would exceed the 500 foot height limit set by the FAA, Brooks said.

“This was the only option that we had. Our towers are too tall,” Kilty said.

The only way to stay below the height limit was to remove the helipads.

“We looked at every possible way. We looked at the concept of bringing in a helicopter,” Brooks said. “If a helicopter has a problem with a load, they’re dropping the load.”

Visions of concrete smashing through the tower’s glass shell or falling onto pedestrians below ruled out a helicopter.

Using a crane to lower debris to the ground was ruled out for the same reasons, Brooks said.

“There is no clear path on how to do this,” Brooks said.

That left the bucket brigade.

Started about three weeks ago, the entire project is expected to take about a year.

The helipad demolition is finished on the west tower but just starting on the east tower, Brooks said.

“It’s the coolest thing going on downtown in my book,” Brooks said.

Once the helipads are removed, workers will install a new roof and new building maintenance systems will be put in place of the helipads.

Not a Major Inconvenience for Residents

Kilty, who has lived in the Harbor Club for six years, said the problems with the building maintenance system and the subsequent removal of the helipads haven’t been overly disruptive for people living in the towers.

“Other than a couple of dirty windows, the Harbor Club has been a pretty comfortable life,” Kilty said. “It really hasn’t impacted my day-to-day life. But if we were to have any windows break or something, we could be in trouble. That’s a main driver to me. We have to be able to maintain the building.”

In addition to removing the helipads, the project includes installing new building ventilation systems and a digital communications system which allows fire officials to know immediately if a fire alarm is a real incident or a false alarm and to stay in touch with firefighters at all times when they’re in the building, Brooks said.

“It’s a mobile phone on steroids,” Brooks said. “Before there were blind spots, dead spots. There aren’t any anymore.”