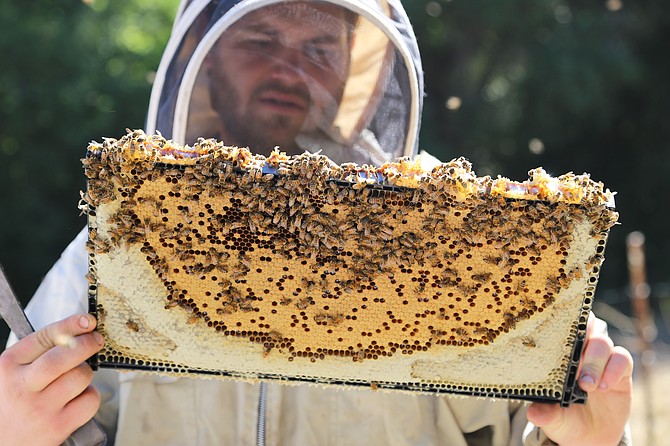 For a few decades now, San Diego has been distinctively known as the craft beer capital of America. In the early 1990s, the local wine industry began to take off in the county, as well, followed by other micro drink alternative scenes, like cider, sake and even kombucha. Now, it appears the success of these beverage businesses has helped spawn another: meadmaking.

For the last 10 years or so, meaderies, or wineries (mead makers operate under the winemaking license) where honey is fermented with water to create the alcoholic beverage mead, have been springing up in San Diego. The first one, Golden Coast Mead, was founded in 2010 and opened its Oceanside location two years later. Since then, at least 10 others have also been established locally.

Frank Golbeck, founder, CEO and head mead maker at Golden Coast, is partially responsible for the recent growth in the local mead industry.

“We’ve helped a number of them (other local meaderies) get started,” said Golbeck, who got introduced to mead by his grandfather while studying international development in college. “When we got our own facility going and other mead makers were getting started, we offered our services and let them use our tanks, under our license. All they needed was retail distribution license instead of a production license.”

Golbeck said he worked with Twisted Horn Mead and Cider in Vista, Good Omen Mead and Hidden Hive Meadery, both in Escondido, and Honey Pot Meadery in Orange County, among others.

The reason he wanted to help other mead makers grow their local mead businesses is because he faced some setbacks when he was attempting to get his going, said Golbeck. He said he reached out to about 80 wineries and breweries in town, and only got a handful of responses back, all of which said they couldn’t help. It wasn’t until he reached out to Triple B Ranches in Valley Center that he found a willing partner, he said.

They said “we can help you out — let’s do a custom crush, or basically a production contract,” he said, adding that, as a result, Golden Coast was able to grow from five home brew batches to three hundred commercial batches. He calls his collaboration with other meadmakers “coopetition,” a play on the words “cooperation” and “competition,” and said the current players in the local mead industry have all figured out their niche, which keeps things copacetic. Golden Mead’s, for example, is a sour, tart mead that is gluten-free, preservative-free and full of probiotics, said Golbeck.

“I think our craft brew culture really contributes” to the growth of the mead industry, he said. “San Diegans care about nature… There are also a lot of foodies here, lots of culinary options… So, we help each other grow, and in doing so, we help the entire mead market grow.” 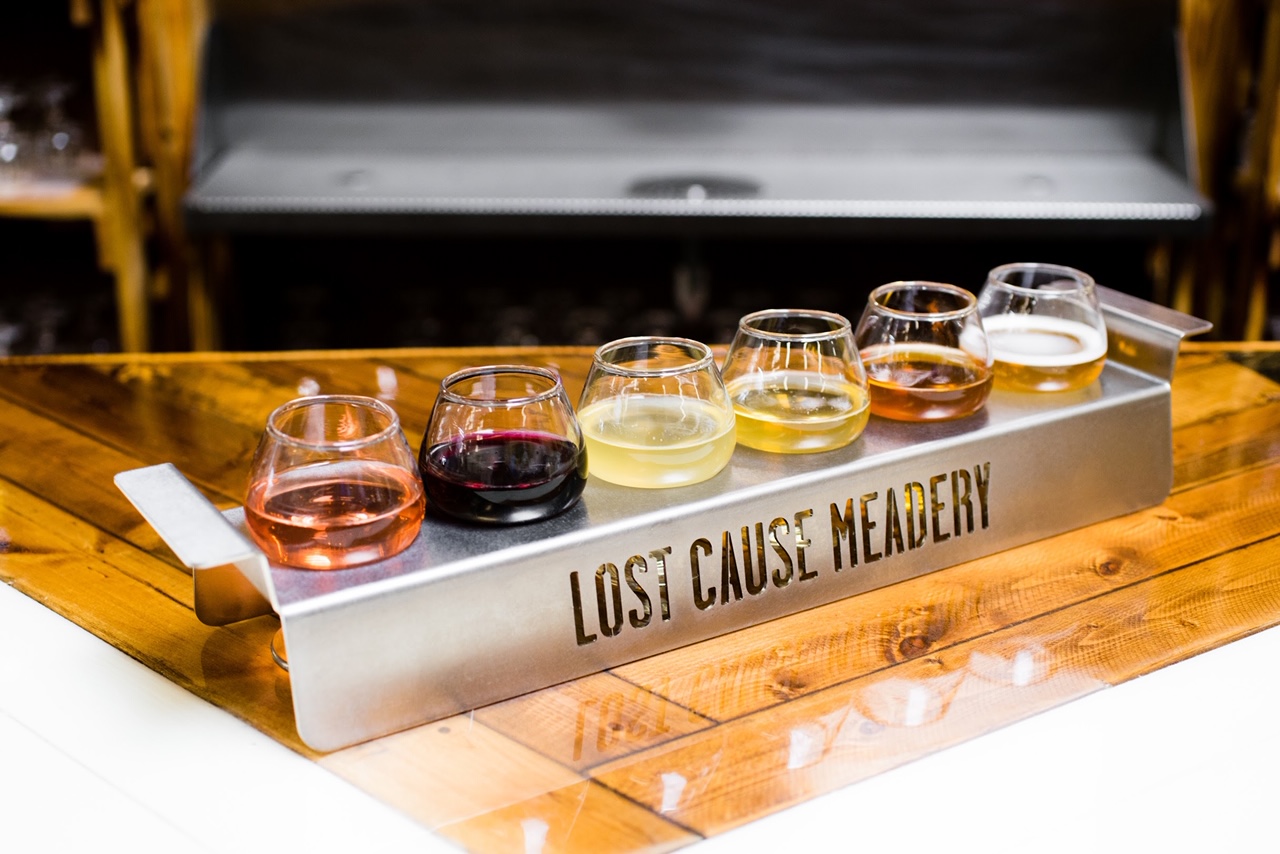 “There is a constant demand for new beer, new wines and new craft drinks,” he said, “and drinkers within San Diego are engaged with the culture where their beverage comes from. Mead is a natural fit — it’s a unique beverage produced in San Diego and the raw ingredients come from San Diego as well. Some wineries may do that, but, typically, breweries don’t since they buy their grains from outside of San Diego.”

Meadiocrity, which does its own beekeeping (most others buy blended and filtered honey, he said) and focuses on accentuating the honey characteristics, opened its 3,400 square foot San Marcos location with a tasting room early October. He said the reason he chose to make beekeeping a part of his mead-making process is because he believes this is what gives the Meadiocrity mead its distinct character.

“Our beekeepers will move to make sure (the bees) have food, which changes what forage they have,” he said, adding that, as a result, the honey used in the Meadiocrity mead showcases the cultivated crops in San Diego. “While orange blossoms were blooming, they were getting that orange flavor. Then they moved to buckwheat and sage. The combination of those nectars comes together within the honey which gives the mead aromatics of orange blossoms and herbal notes… So, we have different honeys based on blossoms.”

Oberle explained that, while no one can date the first instance of the beverage, mead is the oldest alcoholic drink in the world; he said there are some findings in China that date back several thousand years. The way mead is created, he said, is by mixing honey, water and yeast, the latter either wild or cultivated. The alcohol levels in mead can vary, between 3% and even above 20%, although the highest Meadiocrity makes is 13.5%, he said. Oberle said, traditionally, a meadmaker uses up to three pounds of honey per gallon of starting mead mixture. Aside from being available at its tasting room, Meadiocrity mead is also available in Trader Joe’s and a couple of other smaller national retailers.

“We carbonate a lot of our mead and our flavor profiles are food-friendly, so, you can eat and drink at the same time,” he said, adding that a glass of mead runs around $9 and a flight of four four-ounce mead options costs $12. “We have one on tap that is on nitro,” which is a process he borrowed from beer brewing, he said. So, rather than carbonating, Meadiocrity uses a mix of carbon dioxide and nitrogen gas, which accentuates the creaminess of it, said Oberle. Nitrogenating rather than carbonating causes the mead to have a different texture and flavor, he said.

Billy Beltz, co-owner of Lost Cause Meadery in Miramar (with a second location to open in Bay Park later this year) attributes the recent growth of the mead industry to a number of things.

“The obvious one is, well, it’s delicious, complex and can have a depth of flavor that is hard to match; and that aligns with the desire for higher quality and more flavor in craft beverages that has been the driving trend for craft beer the past two decades,” he said. “There is also a desire for more adventurous drinking experience, range of flavors and the unexpected among younger drinkers, and mead is the ultimate example of that. It is an unbelievably versatile beverage, ranging from bone-dry and refreshing to rich and complex, and can be crafted with any combination of fruits and spices imaginable. Lastly, there is a growing trend for locality and ‘sense of place’ that has been talked about a lot in food and beer/wine lately.”

Mead-making is also a natural progression from beer and wine making, according to Beltz, because the process borrows elements from wine and beer making. Beltz said, to make mead, a mead maker uses a lot of the same equipment used for winemaking and brewing, minus the heating found in the latter. He also said mead making takes some of the “skills and knowledge” from both wine making and brewing, and that the process side of mead making is like brewing, while the ingredient side is close to that of wine making.

“For the most part, it’s like making a wine but instead of using grapes, you’re using honey,” he said.

Dana La Fleur, president of the San Diego Urban Wineries and owner/winemaker of La Fleur’s Winery in San Marcos, agrees with Beltz. She said mead has a “long history,” dating as far back as 4,000 years, and is in line with grape wine both in processing approaches and in being typically between 8% and 20% ABV.

“San Diego is the mecca for the craft beverage industry that is continuing to grow by leaps,” she said, stating that San Diego Urban Wineries opened up its membership to meaderies and cideries in August. “As a result, we see mead making a comeback here in our county. Mead, cideries, high alcohol kombucha, craft distilleries and, of course, some really interesting twists on wine; consumers are looking for new creative and interesting beverages to explore and this fits the bill for many.”

Beltz said the San Diego mead scene is just a chunk of the larger mead industry taking off nationally and that the local rise of meaderies is helping spread the word countrywide.

“The San Diego mead scene is definitely growing,” he said. “Part of it is the rapid growth of the mead category overall across the country. Awareness and popularity of mead is growing everywhere. The other part of it is that San Diego is putting out some extremely high-quality meads. For example, we recently won the most medals in the world at the Mazer Cup International, the world’s largest mead competition. That gets some attention.”