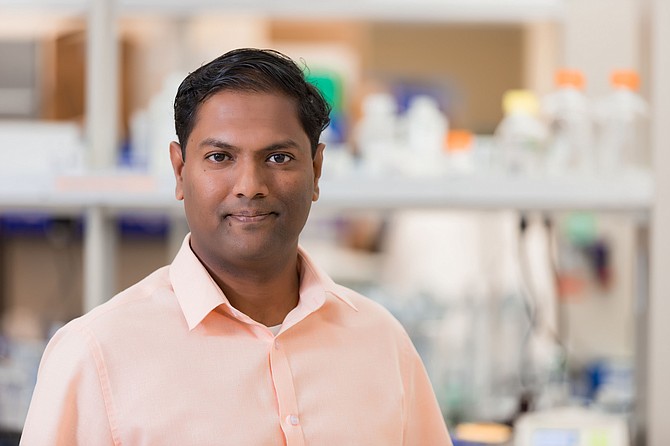 Long impeding drugmakers, entire classes of proteins have proven too difficult to target.

Now, Plexium sees a way to develop new cancer and neurodegenerative drugs by going after “undruggable” proteins. The San Diego biotech emerged Oct. 17 with a $28 million Series A round.

CEO Kandaswamy Vijayan said Plexium tweaks the body’s natural system of moving problematic proteins to the trash chute. The idea is to redirect what are called E3 ligases toward disease-causing proteins.

“What if you could hijack these E3 ligases? That’s basically what we’re trying to do,” Vijayan said, adding the approach distinguishes the company.

Another San Diego company, Vividion Therapeutics, is toiling in undruggable proteins as well. But Vividion — which this spring raised an $82 million Series B round — takes a different tack. Its molecules bind to cell proteins.

Plexium highlighted not only its biology, but also its engineering approach. Its technology screens millions of small molecules simultaneously to speed up the process of identifying possible drug candidates.

“Plexium is replacing the complex infrastructure around drug discovery with an ultra-high-throughput microfluidic platform while reducing assay complexity and supercharging chemical diversity,” said Kiersten Stead, managing partner of DCVC Bio, which led the round along with The Column Group.

In connection with the deal, Stead and Tim Kutzkey, managing partner of The Column Group, joined Plexium’s board.

Previously, Vijayan helmed genomics startup Omniome, which last year raised $80 million in a Series B financing. Prior to that, he was a nanobiotechnology group leader at genomics titan Illumina.

Plexium hasn’t disclosed which indications it wants to treat, only solid tumors broadly. Longer term, Vijayan said the company has its eye on neurodegenerative diseases, a huge unmet need.

Plexium has 42 employees, with plans to add 10 employees by the end of next year. Vijayan said the company’s need for talent in engineering, big data and biology led it to call San Diego home.

Also participating in the funding round were M Ventures, CRV and Neotribe Ventures.