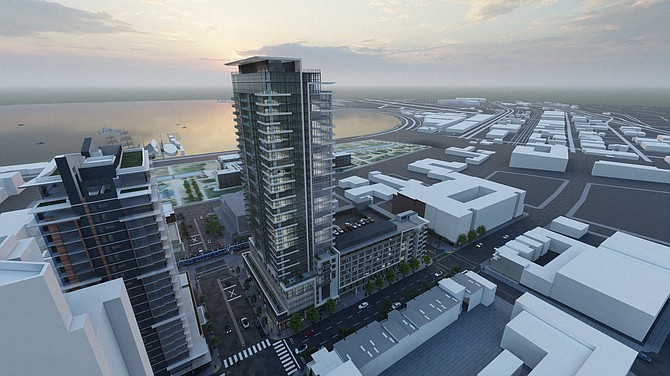 Luxury apartment complexes are nothing new in downtown San Diego’s Little Italy but plans are in the works for one that’s paired with an adjacent complex for low income seniors.

Holland Partner Group is partnering with Bridge Housing Group to build a 30-story market rate apartment tower with an eight-story apartment building for seniors next to it on the west side of Kettner Boulevard between Cedar and Beech Streets.

The 336-foot tall tower will have 293 luxury apartments.

The 85-foot tall affordable housing complex will have 63 apartments for people over the age of 62.

Added to the construction costs will be a ground lease with San Diego County, which owns the site. Lease details are under negotiation.

“The two projects are designed to start at the same time,” Schertzer said. “We’re really excited to get this going. We’ve been working on this for quite a while with Bridge Housing.”

The site is “kind of the gateway between Little Italy and the bay,” said Frank Wolden, a principal of AVRP Skyport, which is designing the project.

“Beech Street is a very important view corridor through the city to the bay,” Wolden said.

“Beech Street is kind of the southern end of Little Italy.”

Each to Have Its Own Character

The tower and smaller building will be very different in character.

“They share some common material and things but they do appear as separate buildings,” said Brad Wiblin, executive vice president of Bridge Housing. “That was important, that they be related but not be the same.”

Under federal and state law, senior housing must be separate from market-rate family housing.

The Bridge Housing building will be wood frame on a concrete podium with a predominantly stucco finish compared with the tower, which will be concrete, steel and glass in three shades.

“There’s a lot of glass and views and balconies and decorative materials,” Wolden said.

The tower building will include 5,115 square feet of commercial space wrapping around the Beech Street and Kettner Boulevard side of the building.

“From a design viewpoint, the Kettner experience is a different experience than the Beech Street experience, which is really adjacent to two towers and a major, very active intersection,” Wolden said. “That side of the project has every bit an urban face.”

An existing five-story county-owned parking garage will be incorporated into the project by wrapping the affordable housing portion around the garage.

The smaller size of the Bridge Housing building and its design complements the residential feel of the adjacent section of Little Italy.

No Retail for Affordable Complex

Initially, the affordable housing complex was to include some ground-floor retail but that was removed in response to community comments, Wiblin said.

“We’re bringing the residential right down to the ground floor,” Wiblin said. “It was clearly the desire of the neighborhood.”

The parking levels of the two complexes will be connected to each other and the county garage, but the upper levels of the buildings will not, Schertzer said.

In all, the project will have 176 parking spaces.

Apartments in the tower will range from 509 square feet to 1,301 square-feet and include five penthouse apartments on the top floors, most of which will have two levels.

The building will include 5,115 square feet of commercial space.

Planned amenities include a gym, pool and spa.

Rents in the tower won’t be set until the project is closer to completion, Schertzer said, adding that the tower is likely to attract a mix of tenants including “professionals who want to be in the Little Italy neighborhood”

Near the Trolley Station

The project is across the street from a trolley station, which makes it convenient for people to commute to job centers elsewhere, including UTC once the trolley line extension is complete, Schertzer said.

“We don’t target our market to any specific group,” Schertzer said. “I think we’re going to get a pretty large range of people that are interested.”

Rents in the Bridge Housing portion of the project will be set according to income with the project designed for seniors designated as very low income to low income.

The affordable senior apartments will range from 462 square feet to 1,184 square feet.

“The vision is to create a synergistic feeling of place, providing much needed housing next to transit, integrating a mix of uses into a vibrant historic community and activating an underutilized parcels,” said Cynthia Parker, Bridge president and CEO.