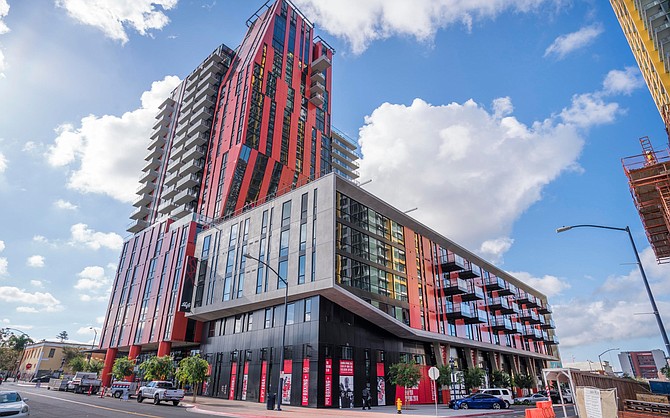 East Village’s bold Shift apartment tower was meant to get noticed, according to its developer and designer, and it sure got that from the San Diego Architectural Foundation.

With its dramatic red and black stripes running vertically up the sides and angular structure, Shift was picked as a real stinker by the foundation — getting an onion for architecture and also picking one up for the People’s Choice category.

The foundation each year awards orchids to new projects which its members think exemplifies the best in several categories from architecture to public art.

Onions go to projects that miss the mark.

Earning the dubious distinction of winning an onion and an orchid was the Mission Hills-Hillcrest Harley & Bessie Knox Branch Library.

In awarding Shift an onion for architecture, judges and members of the public who nominated Shift weren’t shy in expressing their dismay.

The 21-story tower was developed by LMC, a Lennar Co., and designed by Carrier Johnson + Culture.

“The building is so awkward, it’s just a mess. None of it holds together,” the judges wrote.

They gave LMC credit for taking a risk and said it was nice that the developer went for something other than stucco and beige but said the black-and-red choice didn’t work.

“Architecture is a profession that is not for the faint of heart,” Warner said. “Our training starts with studio courses where our work is regularly critiqued in group settings and we grow and improve our craft through this process. Carrier Johnson is a very successful firm run by very talented architects. They will continue to design thought-provoking projects.”

As for the Mission Hills-Hillcrest branch library, judges said the building was “arts and crafts meets mission style gone terribly awry — from faux rocks to the inhospitable chain-link fence separating the library from the adjacent school.”

At the same time, judges really liked the climate clocks art display inside the library.

The “climate clock” art work by Janet Zweig of Brooklyn, N.Y., consists of three huge wheels anchored to the interior wall of the main room in the library.

The wheels rotate, gradually unrolling spools of paper on which are painted various scenes that gradually disappear, representing what could happen with climate change.

Foundation judges found that the climate clocks were “about an important issue that needs to be talked about. It is relevant and driving a tough conversation.”

Winning the Malone Grand Orchid for architecture was the Palomar College maintenance operations complex. The award is named after the foundation’s founder, Edward Malone.

The two-building Palomar College complex was designed by BNIM architects and built by Level 10 Construction.

Judges praised the “thoughtful design” of the complex “that succeeded both on an aesthetic and practical level,” adding that “It had remarkable attention to detail where every joint — from the sidewalk, to the window fins, to the metal panels — all lined up perfectly.”

Among other things, the Palomar College complex will produce more energy than it uses and collect rainwater to irrigate the surrounding landscape. The complex uses a rooftop solar array to generate electricity, thermal chimneys to help cool and heat the building and help shade the interior, and louvers that can open at night and close during the day to help with cooling.