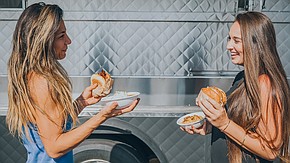 According to a press release, Union Kitchen & Tap, with locations in Encinitas and Gaslamp, recently hit the streets of San Diego with its Union Kitchen & Catering Food Truck. The release states that the truck will be mostly parked in the Pacific Beach area and will include OMG stapes like the Nashville hot chicken sandwich, the AleHouse grilled cheese, the Union Gumbo and the Mexican street corn.

The Union Kitchen & Catering Food Truck will also be present at upcoming events, like Pride in Oceanside on Oct. 12, as well as Late Nights in front of Backyard Kitchen & Tap every Friday and Saturday in October from 10p.m. to 2a.m.