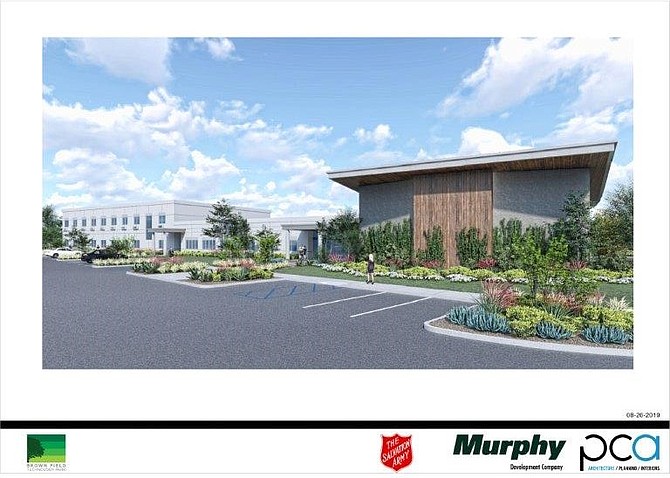 Looking for a site where the “economics work for us,” The Salvation Army is building in Otay Mesa. Rendering courtesy of Salvation Army.

When The Salvation Army decided to relocate its downtown San Diego operations, it picked Otay Mesa as its new location for the same reason many others are heading south — land is available and for less money than elsewhere.

“In order to find the size footprint in central San Diego that we have in Otay Mesa would be nearly impossible or extremely expensive, so we’ve got to go where we have the space and where the economics work for us,” said Major Henry Graciani, general secretary of The Salvation Army Centers Command based in Long Beach.

“We served our purpose downtown and we’ve done great work there,” Graciani said, adding that the Salvation Army had outgrown the multilevel warehouses it had been using since 1980 at 13th Street and Broadway.

“We just don’t have the space we need to grow and provide the services that the community needs,” Graciani said.

With all the new construction downtown, it also was becoming increasingly difficult to maneuver trucks in and out of the site.

The Salvation Army sold its downtown property to Liberty National Corp., which plans to combine it with adjacent land the company owns to build a 40-story apartment tower on the site.

At the same time, The Salvation Army acquired a 12.8-acre site in Otay Mesa in the Brown Field Technology Park where Murphy Development will build two mixed use buildings for the organization — an 85,000 square-foot industrial building and a 45,000 square-foot support services building.

The Salvation Army marked its move with groundbreaking ceremonies Sept. 30.

The purchase price of the Otay Mesa property was not disclosed.

“We don’t have any final numbers,” Graciani said. “It’s going to be a sizable expense.”

Graciani said the support services building will be used for The Salvation Army’s residential drug and alcohol treatment program for up to 120 men.

“They come to us with the clothing on their back. We will take them in, we will feed them, we will clothe them and give them all the services they need for six months,” Graciani said.

If necessary, those in the treatment program can extend their stay for an additional six months, he said.

The Salvation Army operates a similar program for women in National City with 20 beds. Women in the treatment program will receive some services at the Otay Mesa location, but they will live in National City, Graciani said.

The building also will have office space, kitchens, recreation space, a library and a computer room.

The larger building will be used as the central site for collecting clothing and other goods that are donated to The Salvation Army from throughout San Diego County.

“We’ll receive and process our donations there,” Graciani said.

The building also will include a retail store, where The Salvation Army will sell the donated goods to help pay for its services.