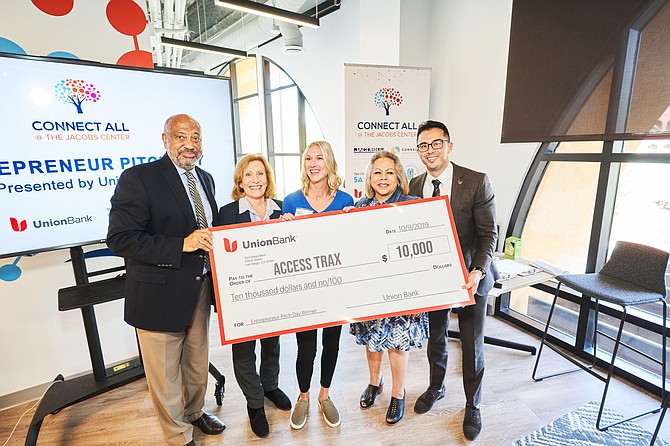 Connect All at the Jacobs Center’s first cohort of startups delivered their pitches on Wednesday. The six-month incubator, designed to create well-paying jobs in low-to-moderate income areas, graduated 13 companies with the conclusion of the program on Oct. 9.

In front of a panel of three judges, the startups shared the progress they had made through the program and their plans for growth. Access Trax Founder and CEO Kelly Twichel won the prize of $10,000 for her company, which makes portable surfaces that allow wheelchair users to navigate sandy beaches and other bumpy terrain.

Twichel co-founded the company last year with Eric Packard, after she came up with the idea while studying occupational therapy at the University of St. Augustine for Health Sciences in San Marcos. The startup began working with adaptive surf groups in San Diego to see if there was a market for its product.

Although there are competitors in the space, most make the woven plastic mats currently found at public beaches. Those mats need to be swept and maintained regularly, and can cut people’s feet when they fray.

With the additional $10,000, Twichel plans to bring on Access Trax’s first part-time employee, and take the company to a trade show.

Twichel dedicated the prize to the Fletcher family, one of her startup’s early customers.

Connect All has selected its next cohort of startups. The incubator program is hosted at the Jacobs Center for Neighborhood Innovation and funded by a four-year, $2.5 million grant secured by the City of San Diego. Union Bank also contributed a three-year grant of $300,000 to the program, and provided the $10,000 cash award for the pitch competition.

“This is one of my father’s dreams, to support entrepreneurs,” said Valerie Jacobs Hapke, a board member for the Jacobs Center for Neighborhood Innovation.

Other startups in Connect All’s first cohort include:

• Butterfly Boutique and Day Spa: A salon that offers various prices for its services based on a customer’s needs. Owner: Imani Robinson

• Faveo: A startup that connects businesses to nearby individuals that can help with moving and other labor-intensive jobs. Owner: Xavier Rodriguez

• Mapigator: A website and mobile app that matches people with all types of disabilities to businesses that can accommodate their specific needs and preferences. Owners: Linda St. Angelo Burritt, Janine Boleda