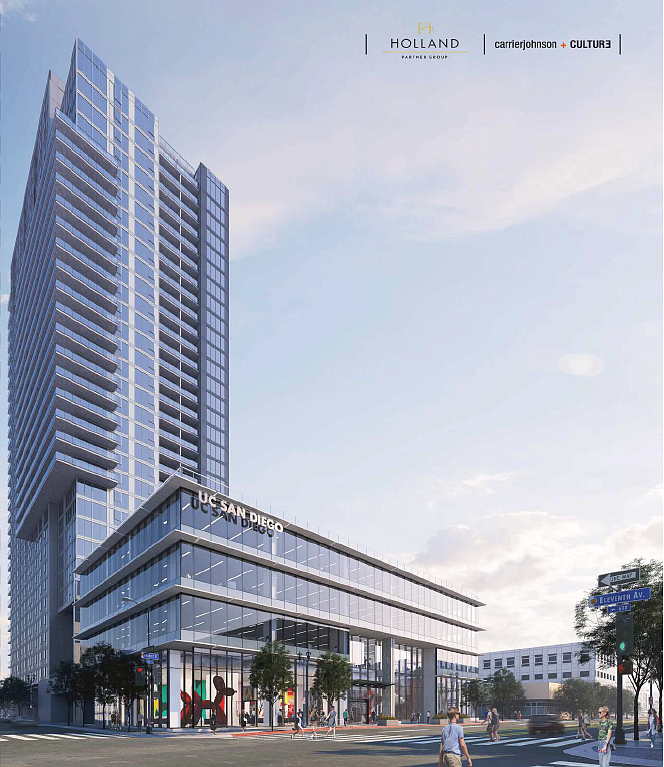 An East Village apartment tower that will incorporate a historic home and share a city block with the new downtown campus of the University of California San Diego is nearing completion.

“Being close to completion is really exciting,” Schertzer said. “We’ll likely start leasing at the beginning of next year.

Schertzer said 20 percent of the apartments will be designated affordable for very low income families.

According to federal HUD (Housing and Urban Development) guidelines, households of two people would qualify as very low income with an annual income up to $42,800.

The balance of the apartments would be market rate, including four two-story penthouses and 10 single-level penthouse flats.

“We haven’t set any of the (market) rents yet,” Schertzer said. He said the apartments will range from about 500 square feet to about 1,300 square feet with studios and one, two-bedroom and three-bedroom units. Most will have balconies.

The apartments also will have quartz countertops, under cabinet lighting in the bathrooms, mechanical shades, keyless entry and thermostats that can be controlled from a cellphone.

Building amenities include a dog run, a second-floor club room and outdoor deck, a two-level gym on the third floor and a lounge, pool and spa with grilling areas on the top floor.

“It really will be a full amenity deck,” Schertzer said. “The views from up there are pretty spectacular. You’re well above most of the property around you. You’ve got wide-open 360-degree views of downtown all the way up to Balboa Park.”

Tenants are expected to be a mix of ages and income levels, “young professional people working downtown, people who like to live downtown, who like the downtown environment.”

To make room for the tower and UC San Diego campus, the historic Remmen Building was temporarily moved to a vacant lot on Market Street.

Built in 1907, the two-story craftsman-style house will be moved back onto the northeast corner of the site in mid-October to be used as a restaurant.

“We’ve reoriented the house toward Park Boulevard,” Schertzer said. “We feel like it’s made for a better orientation for the house. It fits better into the overall space we’re creating and it also faces Park Boulevard, which is slated to be a bike thoroughfare.”

The exterior of the old house will be largely unchanged.

“We’ve taken out some of the interior walls and we’ll be putting in new structural improvements within the building to bring it up to code,” Schertzer said.

The interior design will depend on who leases the space.

“We’ve held off on taking out elements of the interior that we haven’t really needed to for the time being,” Schertzer said.

In addition to the apartments, the project will include 3,000 square feet of retail space on the ground floor.

Going up next to the tower complex at the corner of Park Boulevard and Market Street is the four-story UC San Diego campus that will share some of the amenities of the apartment tower, including an outdoor amphitheater, Schertzer said.

“They’re going to be a huge catalyst for everything that’s going to be coming over the next few years,” Schertzer said.

Like the apartment tower, exterior work on the UC San Diego building is finished but university officials are still working out what the interior will look like depending on the programming they settle on for the project.