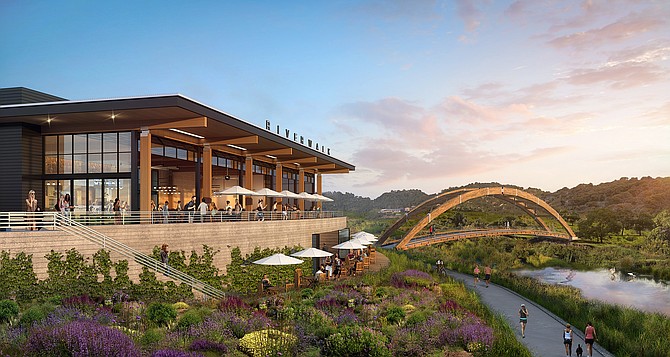 An 80 acre park along the river will keep this mixed-use project connected to nature. Rendering courtesy of Hines.

A massive $2 billion redevelopment project that will reshape a big chunk of Mission Valley along the San Diego River is nearing a critical stage with preparation of an environment impact statement coming in January.

The Riverwalk project by the Houston-based developer Hines will transform the Riverwalk Golf Course into a mixed-use community.

Hines was picked to redevelop the property four years ago by the Levi-Cushman family, which owns the 200-acre site.

“We collectively view this as our opportunity to leave a legacy for this city,” said Eric Hepfer, a director at Hines. “The goal is to restore the river to its natural habitat and create a project that is walkable and inclusive.”

As proposed, the project will have more than 100 acres of open space including an 80-acre park along the river on what is now the 27-hole golf course.

“Right now, you have to be a golfer to enjoy this. We’re going to open it up to everybody,” Hepfer said.

It also will include 4,300 apartments with a possible mix of some condominiums, 152,000 square feet of retail space, a million square feet of offices and a new trolley station at the center of the development.

The apartments are meant to appeal to a broad range of tenants from retirees to working professionals and will include 400 affordable units, Hepfer said.

“What we try to do is build projects that bridge generations as well as socio-economic status,” Hepfer said.

A key milestone will come with the completion of the environmental impact statement, which Hepfer said should be finished by summer 2020.

Construction could start as soon as early 2021 on the northern edge of the site along Friars Road, Hepfer said.

The nine-hole golf course on the northern section would be closed at the start of construction, but Hepfer said the 18-hole golf course that abuts the river will remain open for an additional five years.

Because it’s so big, the project we will likely take 10 to 15 years to complete the project, Hepfer said.

At the heart of the project is the new trolley station.

“That was sort of the centerpiece of the design,” Hepfer said. “We really think transit oriented development is the future of development. What we really wanted to do with this project is make this (trolley station) the front door of the project.”

Architects with MVE + Partners based in Irvine said they designed the project to be a series of neighborhoods with connecting trails leading to the 80-acre park and the river itself.

“Our challenge was really to make sure there are neighborhoods within this community, that it’s not just one large development,” said Tim Beuchat, associate partner with MVE + Partners. “It represents smart growth, working off transit, bringing transit where it belongs.”

Ken Nilmeier, MVE principal and director of planning, said each neighborhood within the overall development will have its own character.

“We’re clearly looking for diversity in architecture where there’s some variety but there’s also complementary styles that sort of support each other but still provide variety,” Nilmeier said. “The more clichéd red tile roof community, we’re certainly looking for something a little more urban in character.”

Most of the retail space would be off of Friars Road, stretching down to an extension of the existing road that leads to the golf course clubhouse.

The idea is to make the new trolley station as a destination in itself rather than just a place where people catch a ride to somewhere else.

The clubhouse will be redeveloped into a restaurant that will overlook the 80-acre park and the river. 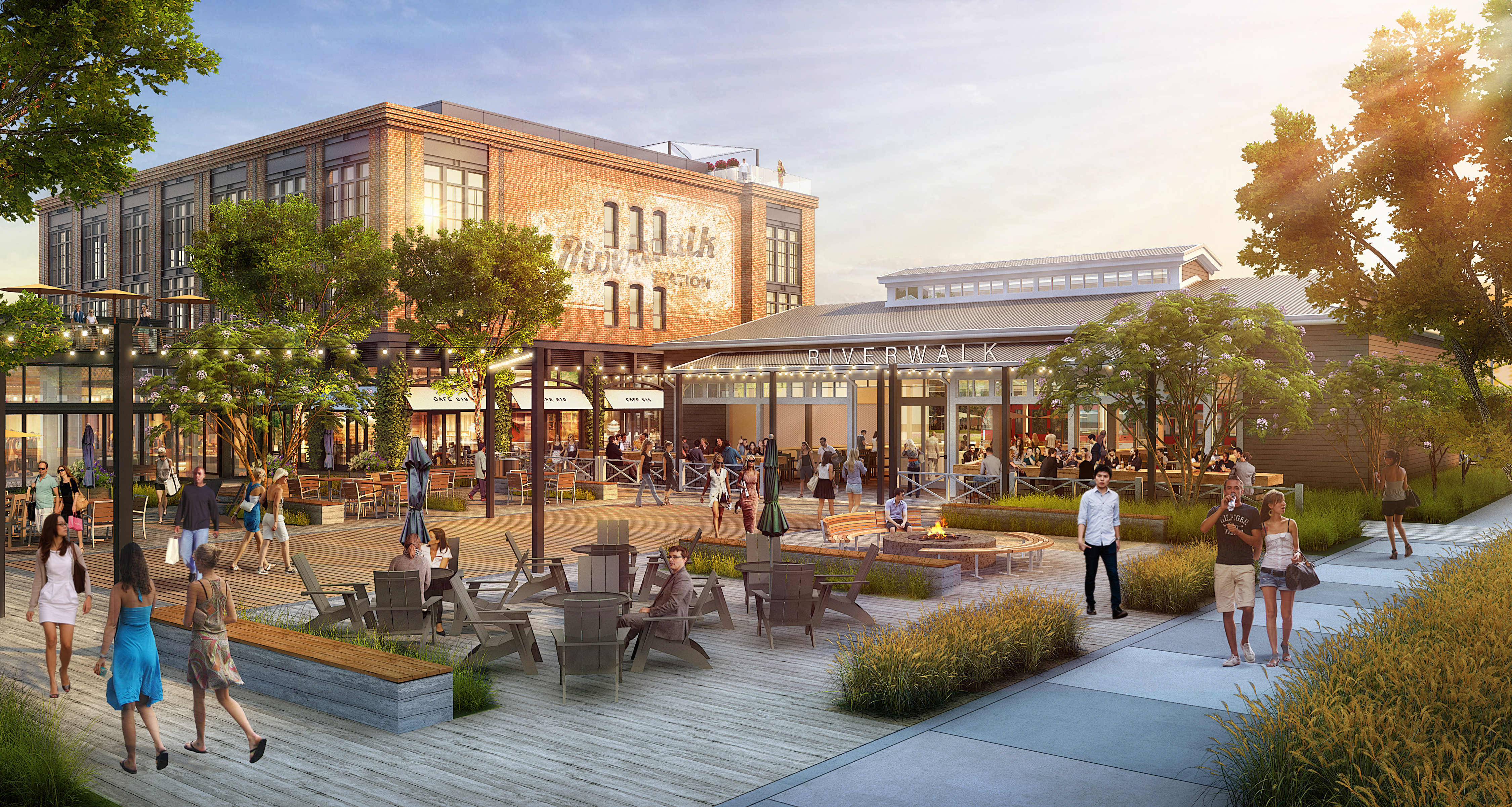 Hines was picked four years ago to redevelop the property by the Levi-Cushman family. Rendering courtesy of Hines.

The design of the trolley station itself is “inspired by historic train station buildings,” Beuchat said, adding that, it will “help break up the scale and character” of what’s mostly residential area.

The trolley station site will include a large urban plaza as part of what landscape architect Glen Schmidt said is a drive to include wide swaths of open space, partly in response to public comments on the project.

“They wanted to have open space and to experience nature and to have trails that you could enjoy hiking through the (river) corridor,” said Schmidt, president of Schmidt Design Co. of San Diego.

In addition to the main 80-acre park, Schmidt said the project will include four smaller urban parks, three dog runs and linear parks leading down to the river.

The grass that covers the golf course will be replaced with native plantings, including oak and sycamore trees, Schmidt said.

“The thing that is most special is the amount of native vegetation that we’re doing,” Schmidt said. “Celebrating the San Diego River is the theme and that will be reflected in all of our landscaping throughout the development.”

With looping trails running through the project, Riverwalk is a key piece to a biking and hiking trail envisioned for more than a decade to link the mountains to the east to San Diego’s beaches.

Rob Hutsel, president and CEO of the San Diego River Park Foundation, said the Riverwalk project is “an opportunity to implement the vision we’ve had for 18 years on the river park.”

The foundation hasn’t taken a formal position on Riverwalk, but Hutsel said “It looks very promising in terms of the benefit to the river and the value of the park.”

With conversion of much of the golf course into the 80-acre park, “There’s an opportunity to remove grass and all the fertilizer and things that go on that and put in natural habitat.”

Along with redeveloping the golf course, Hines is planning a number of improvements in the surrounding area, reconstructing Fashion Valley Road where it crosses the river to reduce flooding.

Originally designed by the Army Corps of Engineers to flood during major rainstorms, the design of rebuilt road is made so it will only flood once every 10 to 15 years, Hepfer said.

Hines also will install smart traffic lights along Friars Road. The smart lights can communicate with each other to allowing for a smoother flow of traffic, he said.