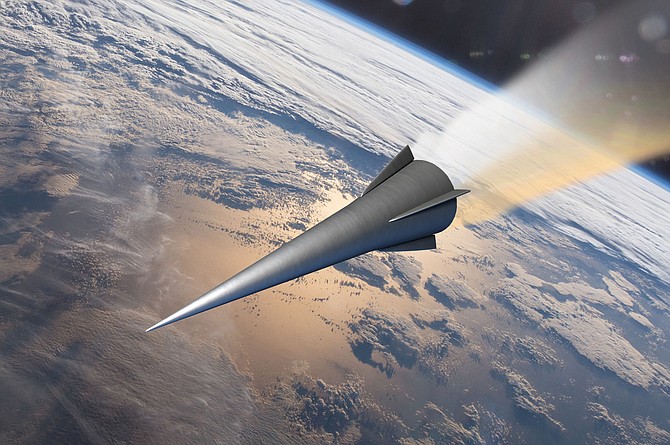 A rendering of a hypersonic vehicle. Rendering courtesy of General Atomics.

The Army’s Rapid Capabilities and Critical Technologies Office at Redstone Arsenal, Alabama awarded the deal, announced on Sept. 30. Work will be done in Huntsville, Alabama and Albuquerque, New Mexico.

GA issued a statement Oct. 1 saying it was supporting the Army in developing a prototype of a hypersonic glide body.

“Over the past 13 years, we have worked closely with the Army and Sandia National Laboratories to design, manufacture and test hypersonic glide body components and technologies. We look forward to leveraging that expertise as this critical capability transitions out of the lab and into a production-ready asset to support the war fighter.”

Hypersonic weapons travel at Mach 5 or faster. Mach 5 is five times the speed of sound, or approximately 3,750 mph at sea level. The Congressional Research Service reports that they come in two forms. They may be gliders launched from a rocket. Alternately, they may be cruise missiles with air-breathing engines. By flying low, such weapons can evade enemy radar better than ballistic missiles. Russia and China plan to field hypersonic weapons as early as 2020.

An affiliate of General Atomics Electromagnetic Systems, General Atomics Aeronautical Systems Inc. of Poway, received a $9 million contract modification from the U.S. Army to convert nine Hunter Universal Ground Control stations. Work will be done in Poway and is expected to last through April. The U.S. Army Contracting Command at Redstone Arsenal, Alabama awarded the deal, announced on Sept. 30.