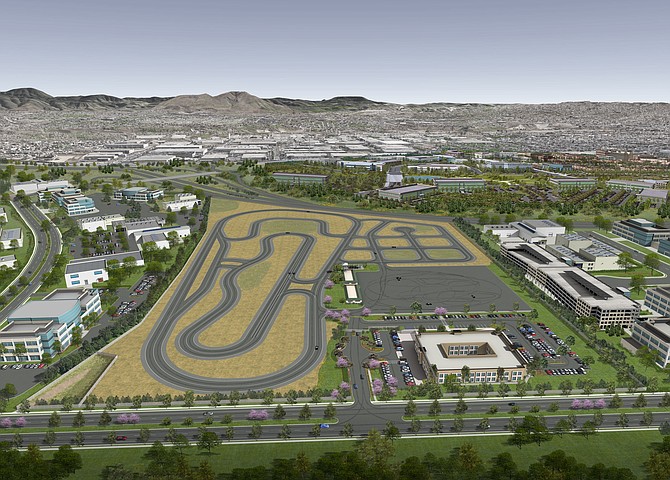 Starting a year from now, police cars and other emergency vehicles will be zipping around a new driver training track in Otay Mesa.

San Diego County recently completed a deal to buy 51 acres of land in Otay Mesa, most of which will be used for a new regional Emergency Vehicle Operations Center (EVOC).

Kearny Real Estate Co. sold the property to the county for $28.1 million as part of a joint venture with the City of San Diego and the San Diego Community College District, according to Christopher Thibodeaux, support services director for the San Diego County Sheriff’s Department.

The property is at the southeast corner of Alta Road and Otay Mesa Road and is part of the Otay Crossings Commerce Park.

“It is the perfect location because there are no sensitive receptors,” said Linda Greenberg, a principal of the commercial real estate brokerage Lee & Associates, receptors being residential neighborhoods.

“They can do it 24 hours a day. They can make all the noise they want,” Greenberg said.

Rob Hixson of the commercial real estate brokerage CBRE said the deal “marked big wins for both the County of San Diego and Kearny Real Estate.

“The county has long needed a permanent Emergency Vehicle Operation Center to train its personnel,” said Hixson, who brokered the deal for Kearny Real Estate.

“This facility will replace the interim, makeshift skills track they had been using in Mission Valley for the last several years. Additionally, this sale allows Kearny Real Estate to kick off the sale of the additional 300 acres they own in East Otay Mesa,” Hixson said.

Deputies also were sent to an emergency training center in San Bernardino for additional driver training.

The stadium site was sufficient to meet state Police Officer Standards Training (POST), “but was somewhat limited in maneuverability and how much speed we could reach,” Thibodeaux said.

The new EVOC will take up about 40 acres of the Otay Mesa property with the remaining 11 acres used for a future law enforcement supply and distribution center, Thibodeaux said.

Initially, the EVOC will consist of a temporary

administrative buildings and a permanent dual-track that will have an outer high speed section and an inner section that replicates city and county streets, Thibodeaux said.

Construction on the track and infrastructure is expected to begin at the beginning of 2020.

“We expect to be operational by January 2021,” Thibodeaux said.

Long-term, the plan is to build a permanent training and classroom building of up to 50,000 square feet on the site, Thibodeaux said.