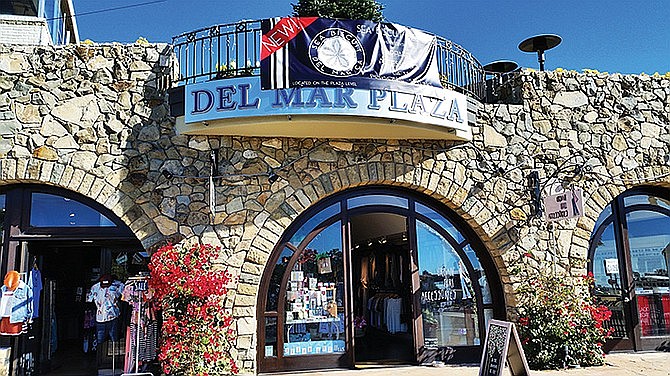 Del Mar Plaza, the 76,000 square foot, open-air shopping and entertainment center located in the heart of Del Mar, will soon get a facelift. Photos courtesy of CoStar Group.

Upgrades to the 76,000 square foot Del Mar Plaza, located in the heart of Del Mar, can now take place thanks to an amendment made to the 30-year-old “Del Mar Specific Plan”. This means restrictions are now lifted on total restaurant square footage and usage of public spaces, and the update makes adjustments to temporary event permitting and signage.

“Official ratification means that significant upgrades can begin to be made to Del Mar Plaza to enhance the consumer experience,” a news release said. “Now, Del Mar Plaza has more freedom and flexibility regarding tenant occupancy and how its spaces can be used, ultimately elevating and modernizing the popular downtown area.”

Specifically, the amendment is applicable to the main plaza at 1555 Camino Del Mar, the commercial property at 1435 Camino Del Mar and the residential units at 1516 and 1524 Luneta Drive, states the release.

After seeing a decline in sales, and tenant turnover at the Del Mar Plaza — mostly due to online competition and other changes in the retail landscape, according to the departing renters — Patty Brutten and business and life partner Marc Brutten of Brixton Capital, a Solana Beach real estate investment firm, decided they needed to significantly revamp it. This meant they had to take on the task of carefully laying down the groundwork to demonstrate the need and desire for change at the plaza to the City Council.

While no owners in the past had been able to successfully present — yet alone get approval on — amendments to the Del Mar Plaza (the plan hadn’t been updated since the late 1980s), the Bruttens received unanimous votes to amend the plan.

Previously a shopping center in the 1950s owned by the Fletcher family — an instrumental family to the development of the area at the time, according to reports — the Del Mar Plaza was founded in 1989. It was acquired by Brixton Capital from Munich, Germany-based GLL Real Estate Partners in 2017 for $45.5 million, according to the Del Mar Times. Back then, a Brixton spokesperson said the company planned to revitalize the center, with plans including modernizing its appearance, tenant mix and community outreach.

“The plaza now needs to recapture that original sense of community purpose with a more defined tenant mix and active event calendar,” Marc Brutten said via a 2017 news release.

A March 2019 article also in the Del Mar Times stated the Del Mar Plaza faced low revenues and attendance levels, with net operating income in 2018 declining by nearly 10% and expected to drop an additional 13% in 2019.