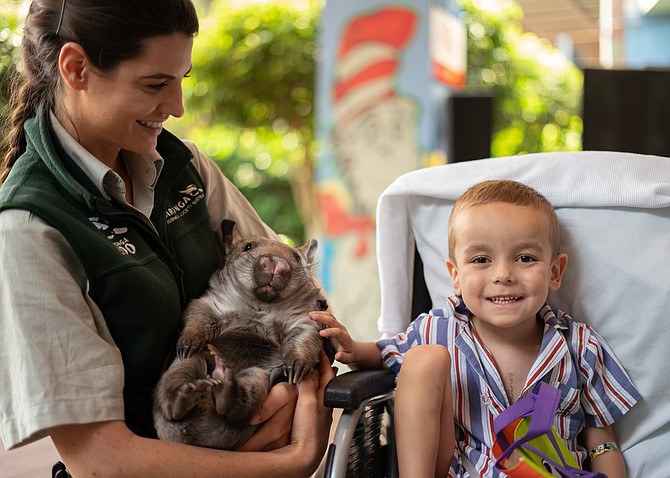 To celebrate the launch of the San Diego Zoo Kids Channel, young patients were treated to a visit with some animal ambassadors at the Children’s Hospital at Westmead on Nov. 18. Photo courtesy of San Diego Zoo Global.

“We continue to be humbled by the healing properties of San Diego Zoo Kids,” said Debra Erickson, director of communications of San Diego Zoo Global, via a statement. “Parents and caregivers share that the channel, which has no commercials or inappropriate content, not only calms children but makes them happy.”

To celebrate the launch of the San Diego Zoo Kids Channel, young patients were treated to a visit with some animal ambassadors at the Children’s Hospital at Westmead on Nov. 18. Photo courtesy of San Diego Zoo Global.

“Taronga and its sister zoo, San Diego, have had a long and productive history, working together to save species and inspiring people to take action for conservation,” said Cameron Kerr, CEO of Taronga Zoo. “We hope that the youth and their support networks — friends, family and the dedicated staff — enjoy the stories presented through this wonderful service, and that it inspires lasting connections between people and wildlife.”

In 2015, the San Diego Zoo Kids Channel Theatre debuted at the San Diego Zoo’s Elephant Odyssey habitat. The theatre, also funded by Sanford, allows San Diego Zoo guests to enjoy a broadcast programming of the kids’ channel, which was only available in 10 children’s hospitals and Ronald McDonald Houses across the U.S. then.

“Denny Sanford has made it possible for us to share animal experiences with children who cannot come to the San Diego Zoo,” said Rick Schwartz, national spokesperson for San Diego Zoo Global, via a 2015 release. “We have heard stories from children and their families about how this programming has made a difference in the lives of patients.

Now, these educational programs are also available to guests that visit the Zoo and the Safar Park.”

In related news, in September, San Diego Zoo Global named movie executive and conservationist Paul Baribault its new president and CEO, effective Oct. 1. He replaced the zoo’s former head, Douglas G. Myers, who announced his retirement earlier this year after 34 years there. Baribault, 45, comes to the zoo from The Walt Disney Studios, a division of the Walt Disney Co., and will be in charge of maintaining and expanding the zoo’s efforts.