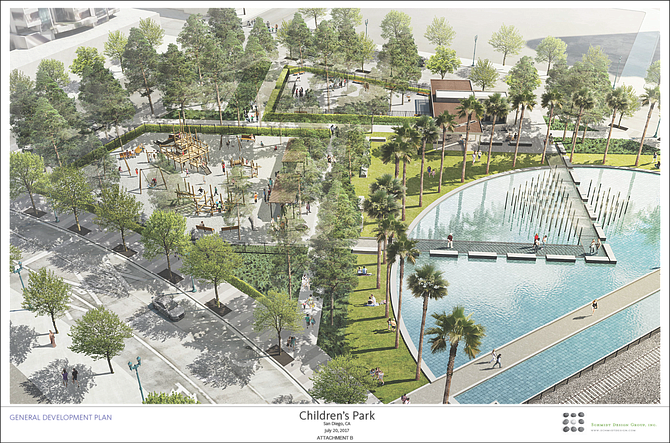 A 1.4 acres public park, founded in 1995 and located in downtown San Diego, will soon be getting a facelift thanks to an $8 million funding from the downtown’s Development Impact Fees (DIF) fund through the Capital Improvement Programs (CIP).

The Children’s Park, located along the south side of Island Avenue between Front and First streets in the Marina neighborhood of the downtown community plan area, has been mostly known as a hub for the homeless. But that is about to change. While the city doesn’t track the number of visitors that come through the park on a daily basis, Brad Richter, deputy director of the Urban Division for the City of San Diego, believes it has tons of potential to be a safe, highly visited place for local residents and visitors alike.

“The park is currently a nice place for people to walk, as well as enjoy the outdoors, but with the redesign, we know it can be so much more,” he said, adding that there is a park ranger, employed by the Parks and Recreation Department, who walks around the area Wednesdays through Saturdays as an added safety measure. “The Children’s Park project will add desired amenities to the park so that many more people can enjoy the park throughout the day. This includes residents, workers, families, dog owners and visitors to The New Children’s Museum, located across the street. The park will serve to attract residents and workers from surrounding neighborhoods as well, with its new amenities.”

The total budget for the park will include the costs of the preparation of the construction drawings as well as permitting, said Richter, and will bring significant construction jobs to the city of San Diego. Construction for the redesign, which has been in discussion since 2016 and after several public workshops to finalize the design, is set to begin early summer 2020. It is anticipated to be finished in the summer of 2021, said Richter. The contractor has yet to be selected.

Kerri Fox, vice president of marketing and communications at The New Children’s Museum, is looking forward to the new and improved Children’s Park.

“We were happy to host community workshops at the Museum during the planning phase, and believe the new plan is a viable one,” she said. “The (re)vamped park will be a great addition to the area. Downtown San Diego is largely void of community space, especially for families. This will bring more families with children to the Marina District, which means more foot traffic for restaurants, stores and (of course) the Museum.”

According to the National Recreation and Park Association, America’s local park and recreation agencies generated $154 billion in economic activity in 2015, nearly $81 billion in value added and more than 1.1 million jobs that boosted labor income by $55 billion.

“More specifically, operations spending by local park and recreation agencies generated nearly $91 billion in total economic activity during 2015,” it said. “That activity boosted real gross domestic product (GDP) by $49 billion and supported more than 732,000 jobs that accounted for nearly $34 billion in salaries, wages and benefits across the nation.”

Further, local park and recreation agencies also invested an estimated $23 billion on capital programs in 2015, the site said. “The capital spending led to an additional $64 billion in economic activity, a contribution of $32 billion to GDP, $21 billion in labor-related income and nearly 378,000 jobs.”

Currently, the Children’s Park features an urban forest of Canary Island pine trees and Italian Cypress trees, said Richter, as well as sitting blocks and the Civic Pond. With the planned improvements, the park will now include a children’s playground, an adult exercise area, an off-leash dog run, a food and beverage vendor building, public restrooms with an attendant booth and new streetscape improvements, “to enhance views into the park,” he said.

Opening Up the Park

To augment sight into the park, the existing urban forest will be thinned out to allow for more light into the area, and the Italian Cypress street trees will be replaced with canopy street trees that will not only help with increasing views into the zone, as Richter mentioned, but will also add public art to the scenery, he said. There will also be a new simulated wood walkway over the pond that will allow people to “walk over (it) through the elevated spray fountain elements to increase enjoyment of the Civic Pond,” said Richter.

“It gives a destination for parents with kids to go visit the museum and then hang out at the park and makes it a more complete day,” he said. “When you couple a visit to the museum with some time spent outdoors, that is a great combination and makes the area more attractive… By having the park and it being a fun, safe and engaging place, it allows a visit of a couple of hours to the museum now a longer part of the day. And, that will certainly drive foot traffic. Businesses and residents can enjoy the park, too.”

While the potential economic factor of the park’s redesign is important for the local economy, Richter is most happy the Children’s Park redevelopment will cater to local residents, those visiting from surrounding neighborhoods and workers near the area.

The “Children’s Park is not only highly underutilized (but) the community has (also) requested improvements and amenities for their use,” he said. “We hope the redesign will bring new life to the park and give families a safe place to relax, play, exercise and even bring their furry friends.”