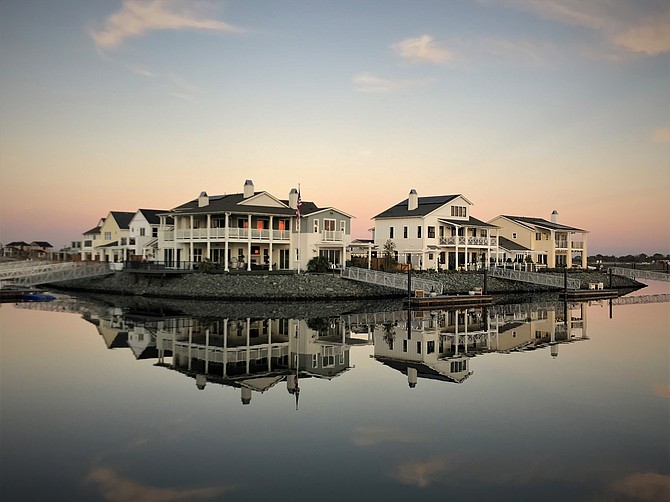 Women’s fashion magazines are where San Diego builder Bill Davidson got some of his inspiration.

The pink houses were in Davidson’s Pointe Del Mar development on the bluff just west of Interstate 5 at Carmel Valley Road.

People laughed. Radio disc jockeys joked about it on air. Some called it Pepto Bismol for the pink antacid medication.

But Davidson won an award for the project, one of more than 200 he’s picked up

“At the time, it was shocking, but at the same time, it was refreshing,” said Kent Aden, senior development manager for HomeFed Corp.

“Over my 35-year career, I’ve worked with virtually every builder in San Diego and I’ve never run into anybody who takes it to the level he does for design and innovation. He’s doing that at a time when most builders are trying to standardize and cut costs. He’s still able to provide the homebuyer with very close to a custom home experience.”

“They’re just well thought-out as far as how they live, how they look. You have a pride of ownership when look at your home,” Ostrem said. “My parents, who are from Chicago, when they would come into town, we would go look at home communities. My dad’s comment was ‘why would you buy any other home but a Davidson home?’ My dad was very much into architecture and that sort of stuff and he was very impressed.”

One of a Few Private Builders

Davidson is one of the few private builders remaining in San Diego County.

Most of the others, he said, were driven out of business by the Great Recession of a decade ago.

“The recession shook everybody to the bones. We lost our confidence. Consumers lost their confidence,” Davidson said. “I won’t take the risks that I used to.”

His company survived, but Davidson said it shrank from a staff of about 100 to about 20, and to this day, he is bitter about what he calls the opportunists on Wall Street — hedge fund managers and others who he said swooped in to make money off the wreckage.

Davidson, 71, grew up in Norman, Oklahoma.

He was in the same freshman class at Northwest Classen High School as U.S. Sen Elizabeth Warren, D-Mass — a contender for the 2020 Democratic presidential nomination.

He has his freshman yearbook to prove it, although he said he didn’t make the connection until a fellow classmate pointed it out recently, and he doesn’t support Warren’s politics.

“I’m a conservative guy,” Davidson said. “That’s the way I was raised.”

Although his early years were spent in Oklahoma, in his teens, Davidson bounced around Texas as his father, Miller Davidson, moved frequently in his job — opening new stores for Sears, Roebuck and Co.

While living in Pasadena, Texas, as a teen, Davidson and his buddies would sneak off to San Diego to go surfing.

They’d tell their parents they were spending the weekend at a friend’s, drive to San Diego on a Thursday, skip school on Friday, then drive back to Texas on Sunday.

“It was a perfect time,” Davidson said.'

He enlisted in the Navy in 1967 and spent two years serving stateside, then went to Mesa College, earning associate degrees in liberal arts and construction. He went to San Diego State University but dropped out after a year.

He toyed with the idea of becoming an architect or an interior designer.

“One of my professors said as an architect, you have to create for other people,” Davidson said.

He formed his company, Davidson Communities, in 1978.

His first project was to build seven condominiums across the street from the University of San Diego in Linda Vista.

His most recent — and his best as Davidson sees it — is Delta Coves, a development on Bethel Island near San Francisco in which each home has its own dock.

“I just fell in love with the construction side of business,” Davidson said.

That hands-on experience is one of the things shows in the houses he builds as a developer, Aden said.

“Part of his success is knowing how to build something,” Aden said. “I once said to someone, if you went blindfolded into 10 different housing projects, you could pick out the three Davidson projects just because of his unique attention to detail and architecture and design. Somehow, you just knew you were in one of Bill’s projects.”

Over the years, Davidson has taken a keen interest in blending the old with the new, building new developments near old structures he restored.

He did that in Ramona with the historic Amy Strong Castle, which he restored as part of his Mount Woodson master planned community, and in San Juan Capistrano where Davidson built an enclave of homes overlooking a horse breeding and training ground once owned by Joan Irvine Smith. Her grandfather, James Irvine, was a prominent Orange County landowner for whom the city of Irvine is named.

“You just find something that’s old and you embrace it,” Davidson. “It’s a little different. We like things that are different.”

Connection to the Past

To help get that old but new feel, Davidson hires American Faucet Co. in Carlsbad to make faucets and fixtures that look like those found in older homes.

He also tries to replicate architectural touches that he comes across in the European villages he visits on his annual trips abroad, right down to the colors of the buildings.

Davidson has his company headquarters in a former Del Mar gas station that he’s renovated.

He has half the building and his wife, Dawn, has the other half for her business — Design Line Interiors.

The two sometimes work together on projects. They collaborated on the San Juan Capistrano project.

“They make a great team with her interior design skills,” said Aden of HomeFed Corp. “That’s kind of the best of both worlds when you get them working on your project as a team.”