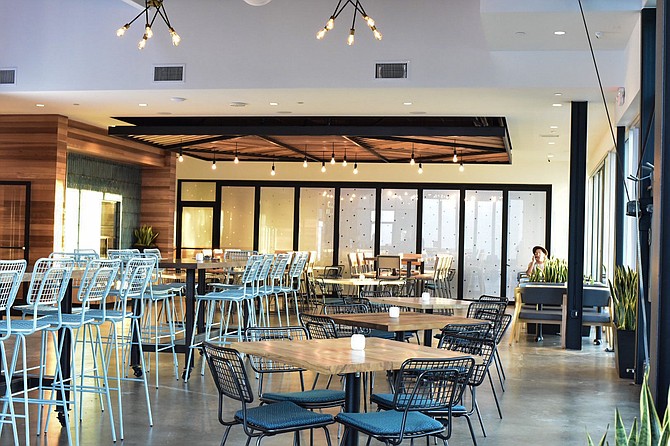 Additionally, Park Commons will also house a full-service bar that will serve craft cocktails, wine and craft beer by local Gravity Heights, the latter also a Whisknladle Hospitality property. A craft coffee shop that will sell Dark Horse Roasters coffee will be among the lineup, as well. The food hall’s annual revenue is projected to be $3.5 million, according to Arturo Kassel, managing partner.

Park Commons is “a collaboration from the entire (Whisknladle Hospitality) team and an effort to adapt to the changing hospitality industry by reducing the amount of service while maintaining the delicious food and genuine hospitality (Whisknladle Hospitality) is known for,” he said, adding that the project took over 2.5 years to complete and cost roughly $2.75 million. “It’s a hybrid by combining the cuisine variety of a traditional food hall with the M.O. of operating a ‘singular’ restaurant.”

Kassel said the group chose Sorrento Valley, a.k.a. “Silicon Valley South,” because, with a population of approximately 130,000, according to the San Diego Association of Governments’ population report, “there was a need for more dining variety and options.” The Park itself is home to technology businesses and startups, including Qualcomm and Sony Electronics. Kassel also shared he is excited that Alexandria Real Estate Equities, headquartered in Pasadena, has recently taken an interest in operating The Park.

Whisknladle Hospitality got started in 2006, after a chance meeting between Kassel and chef Ryan Johnston, his business partner. In 2008, the two launched the Whisknladle restaurant in La Jolla and followed with the opening of three PrepKitchen restaurants (which were sold in 2017), Catania Italian cuisine, Milagro Winery in Ramona and Gravity Heights brewery and restaurant.

Formerly known as the San Diego Tech Center, The Park has 11 buildings totaling 655,000 square feet with a 7-acre park. n