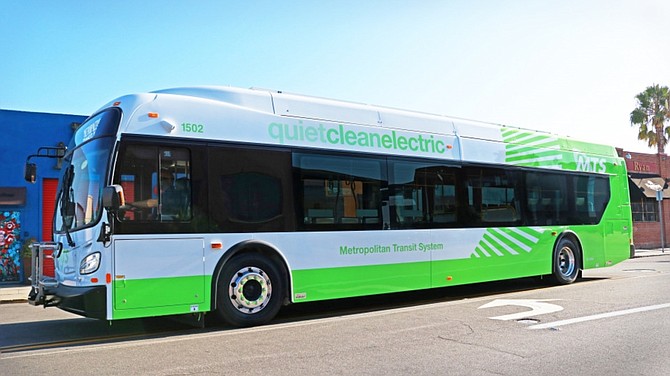 On Oct. 19, 2017, the San Diego Metropolitan Transit System (MTS) Board of Directors unanimously approved an 18-month Zero Emissions Bus (ZEB) pilot program. On Nov. 4, testing on multiple routes around San Diego began, with the buses scheduled to go into passenger service later in the month.

“The transition to zero-emission buses has been contemplated since the year 2000,” said Paul Jablonski, MTS’ CEO. “In the past five years, as zero-emission technology became commercially available, MTS and other transit agencies helped craft new CARB (California Air Resources Board) regulations that set a statewide goal for public transit agencies to gradually transition to 100 percent zero-emission bus fleets by 2040… This zero-emissions bus pilot program is the latest example of how MTS is protecting the environment and reducing our regional greenhouse gas emissions through the use of clean technology.”

MTS’ ZEB pilot project will “help provide an analysis of how ZEB technologies will work for MTS’ transit system”, said Jablonski, and “assist in determining the longer-term impact on MTS”. Jablonski also said the program includes bus and charger procurement, operation of the ZEBs in MTS service for 18 months, and detailed analysis and reporting of cost and performance, identification of infrastructure needs and development of a roadmap from pilot to full deployment of ZEBs.

“MTS is piloting this program ahead of a California Air Resources Board mandate that all transit fleets in the state gradually transition to 100% zero emissions by 2040,” Jablonski said. “The pilot program will give MTS real world operational data required to make sound financial decisions to develop a roll-out plan to submit to CARB.”

San Diego Metropolitan Transit System was founded in 1892, when entrepreneur John D. Spreckels bought a streetcar operation and launched the San Diego Electric Railway Co. Since then, public transit has taken many forms, names and operating entities, according to the MTS, which has operated the system in San Diego since 1892.

With approximately 2,500 local employees, both direct and contracted, MTS services about 86 million riders per year across 10 cities and throughout the county.