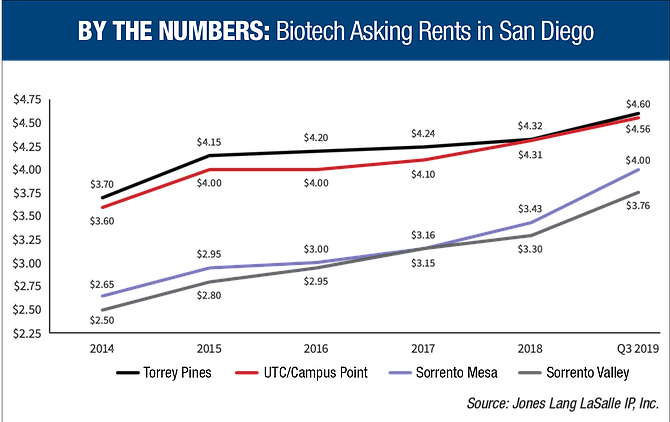 That’s according to a recent report from the brokerage firm JLL.

The report noted 20 life sciences leases in San Diego during the quarter, or 20% higher than the quarterly average the previous three years. Still, recent leases totaled 262,008 square feet — a 31% year-over-year decrease in activity, and 38% less than the prior quarter.

“Leasing activity was highlighted by smaller firms with space needs under 17,000 square feet, with these smaller requirements accounting for 75% of the total number of signed leases,” stated the report.

In the largest lease of the quarter, Mirati Therapeutics Inc. signed a 64,108 square-foot lease in Torrey Pines, expanding its footprint by 250%.

Mirati is a cancer drug developer that recently posted compelling clinical trial data. The company has seen its stock more than double since year’s beginning, closing at $97.25 on Nov. 4.

• Acon Laboratories moved into a 46,110 square-foot building in Sorrento Mesa that was previously occupied by BioLegend.

• VelosBio moved from the incubator JLABS and signed a lease for a 10,085 square- foot spot in Sorrento Valley.

• Erasca expanded its footprint by 4,980 square feet in Torrey Pines.

Tenant demand continues to be strong, the report said.

“There are several local San Diego biotechs evaluating the market for space to accommodate their growth needs, with the bulk of the requirements landing in the 15,000 to 30,000 square foot size range. Additionally, the market is seeing a steady stream of companies that have their headquarters outside of San Diego look to the local marketplace to expand their R&D operations, taking advantage of the strong pool of local talent.”