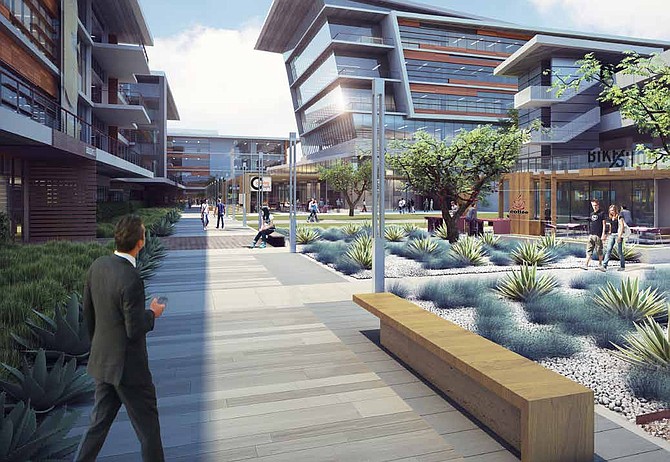 Construction is about to begin on a Del Mar Heights office project. Rendering courtesy of Lincoln Property Company.

An expansive Del Mar Heights office project that has been in the works since 2015 is about to begin construction under a newly formed partnership with a Chinese company.

The original developer of Aperture Del Mar — Lincoln Property Co. — has joined with Gemdale USA Corp. in a $70 million recapitalization of the 15.7 acre project.

“Effectively, the land was purchased by a new entity. That entity is controlled by Gemdale USA,” said Brig Black, executive vice president of Lincoln Property Co.

“We wanted to bring in fresh capital that would build on a speculative basis,” Black said.

Gemdale USA is a subsidiary of Gemdale Corp., which the company’s website describes as one of the largest real estate developers in China.

Aperture is within the master planned community of Pacific Highlands Ranch.

“This site was always designed by the regional master plan to be the employment center location within the community,” Black said.

Lincoln Property Co. acquired the Aperture site in 2015 for an undisclosed price and has spent the past four years entitling and permitting the project.

“We intend to break ground immediately on the first phase of the project on a speculative basis,” Black said. “The first phase is two out of the five buildings totaling 217,000 square feet. We hope to begin grading at the end of the month.”

No date has been set for construction of the rest of the project.

“The campus is designed as a technology and life science campus,” Black said.

Although the project will be built on spec, Black said he’s confident that it will fill up quickly.

“We think it’s proximate to the employment centers and life science clusters in UTC, Torrey Pines and now extending into Del Mar Heights,” Black said. “We think it’s a logical extension of that cluster of tech and biotech. We also like the location of the campus in an almost fully built-out master planned community that is Pacific Highlands Ranch.”

Colliers International, in the brokerage’s report for the third quarter of 2019, projected that demand for office space is strong with vacancy rates countywide falling.

“Vacancy will continue to decrease in Q4 (fourth quarter) 2019, pushing the rate toward 10 percent by year end. The current pace of demand for best quality office space will continue to exceed new supply well into next year,” Colliers reported. “Assuming the economy continues to remain strong and the current supply demand trend persists, vacancy could drop to its lowest level in 15 years.”

Designed by Gensler architects, Black said Aperture is “a cutting-edge architectural design that also contemplates and keeps in mind consistency with the materials and the Santa Barabara-esque palate of Pacific Ranch.”

Among other things, the buildings in Aperture will be connected by an exterior walkway and have balconies that lend them to “an indoor-outdoor environment,” Black said.

The recapitalization and sale of the property to the new partnership of Gemdale USA and Lincoln Property Co. was handled by Kevin MacKenzie, Doug Bond, Nick Psyllos, Michael Leggett and John Chun of the Capital Markets Team of JLL commercial real estate brokerage.

Leasing is being overseen by Chad Urie, Tony Russell and Grant Schoneman of JLL.