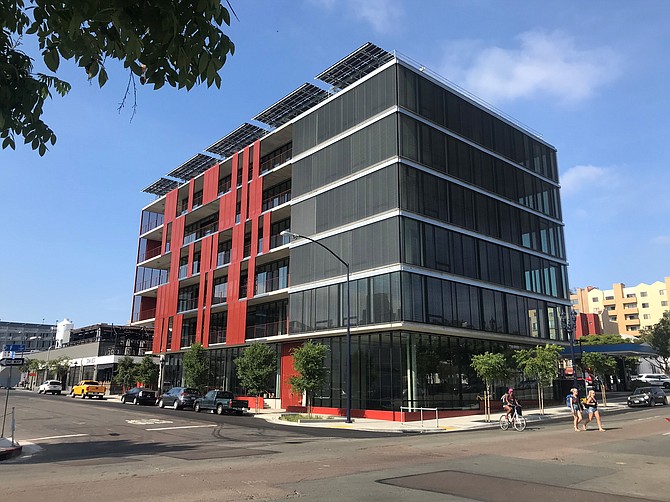 Block D in East Village –— the first building completed in Makers Quarter — has received a top national award for its energy-efficient design.

With 60,000 square feet of office space, the five-story office building was awarded LEED Platinum certification by the U.S. Green Building Council — the first downtown building to get the top ranking.

“Block D is a great example of how environmentally-conscious development can be achieved without abandoning economic feasibility,” said Mary Pampuch, COO and executive vice president of Lankford & Associates — the co-developer of Block D.

Achieving LEED Platinum certification “was one of the goals when we sat down originally on the project,” said Matthew Porreca, principal and director of BNIM Architects that designed Block D.

Porreca said designing and building a LEED Platinum building was challenging, but it added nothing to the overall $13 million cost of the project.

“We didn’t have an increase in the budget to achieve LEED Platinum,” Porreca said.

The building emphasizes natural ventilation through the use of motorized exterior blinds and garage doors on each level.

“The tenants can open up the windows in the evening and all that cool air from San Diego Bay comes in and charges up all that concrete,” Porreca said.

Stairways and corridors were built on the exterior of the building to reduce the need for artificial lighting and air conditioning.

The building also has a rooftop solar array that is monitored using artificial intelligence that operates the blinds as needed to shade the interior.

Among its accolades, Block D also was recently awarded an orchid by the San Diego Architectural Foundation.

The foundation gives orchids to projects it considers outstanding that others would do well to emulate and onions to those foundation judges would rather not see repeated.

Block D “stood out to the jury for all the right reasons,” the foundation wrote.

Citing “the beautiful exposed concrete structure and street level activation to the clever movable panels on the façade, which provide natural ventilation and daylighting” the foundation said Block D was “a demonstrable example of great design.”

“There’s sophistication built into it,” the foundation wrote.

Block D was built on spec, but has had no trouble attracting tenants.

Among those taking office space in the building were Basic Agency, a creative design firm that took the entire fifth floor, and Spaces, a coworking company that leased the lower four floors.

“We’ve been doing lots of tours and educating the construction industry, the design industry, just having people experience it,” Porreca said. “It really was set up from day one to be a model.”