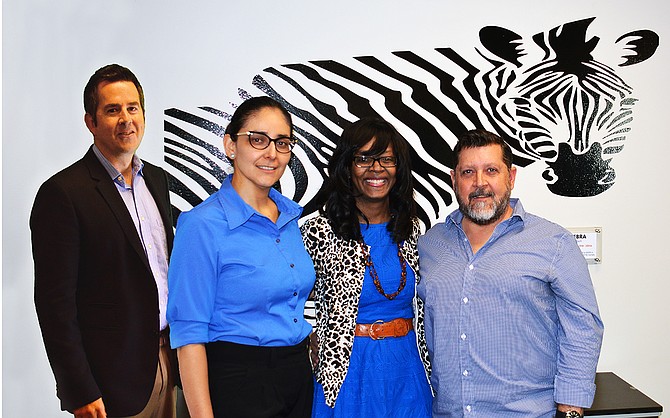 “I was fortunate with my companies to not only grow them to be midmarket businesses but as an underrepresented founder,” Folsom said. “I know how challenging it is to get access to growth capital.”

It took Folsom eight years to build her first startup, SeminarSource.com, a platform providing continuing education online to physicians. The first funding she brought in to her company was traditional debt, which she was able to acquire because she had real estate assets. She closed her first round of venture capital funding after her company was profitable and generating more than $1 million in revenue.

At the time, there were few other women she could look up to that had done the same.

According to Project Diane, a study of venture capital-backed minority female founders, only 12 black women had raised more than $1 million in venture capital for their startups as of 2015.

Years later, the amount of woman- and minority-led companies that receive funding has increased, but the statistics are still pretty abysmal. According to a study of five years of VC funding by RateMyInvestor and DiversityVC, just 9 percent of funded startups were led by female founders, less than 2 percent had Latinx founders and less than one percent had black founders.

“I’ve built lots of great companies for the people I’ve worked with. Doing it as a woman of color and a tech executive in the late nineties… Just from a standpoint of having someone take you seriously, doing that was (challenging),” she said.

Across her companies, Folsom has raised more than $30 million in growth capital, and 95 percent of it was venture capital.

With Founders First, Folsom looks to invest in early-stage startups led by underrepresented founders that are too small for a bank loan, and are outside of the sectors normally targeted by venture capital companies. For example, Founders First will invest in female- and minority-led startups, as well as companies led by veterans or in low-to-moderate income areas. The company focuses on businesses that are turning a profit, and are looking to raise funding to grow.

Though Folsom has a background in technology, she doesn’t look to strictly invest in high-growth tech companies as many investors do. Rather, she focuses on funding startups that can apply tech to their work, such as the services and manufacturing industries.

“We look at it from a standpoint that we focus on funding Main Street businesses,” she said. “There’s so much energy around pure tech, especially on the coast.”

Her company will provide up to $1 million in revenue-backed financing for startups. That means instead of giving an equity stake in exchange for funding, founders take out a loan and repay it as a percentage of the company’s revenue, until they have paid back the agreed upon amount (usually 1.5 times to double the amount borrowed). It also requires no personal guarantee.

If a founder’s business is struggling, Folsom said they’ll work to create a repayment plan that works for both parties.

“When you’re under $5 million in revenue, you have a lot of fluctuations (in revenue), because you’re still figuring out product market fit,” she said. “We want them to be successful.”

This adds some risk, but at the same time, allows Founders First to move more quickly than an investor waiting for an exit.

“With revenue- or royalty-based investments, as they get paid, so do we, as opposed to waiting for some big exit to happen,” she said.

Like any good investor, Founders First also provides startups with mentorship and support services. The firm invests in startups that have gone through its FastPath or boot camp programs, which provide leadership and business tools to founders.

Founders First recently secured a $100 million credit facility which it plans to use to make 500 investments over the next five years. The company also will receive a portion of the Consumer Technology Association’s (CTA) $10 million fund, that is being invested into funds that support underrepresented founders.

“It’s exciting for the market that we serve, having groups like CTA sharing in that mission,” Folsom said.

Find Investor Who Know the Sector

Folsom advised startups to partner with investors that can provide more than capital, but that can also help them take their business to the next level. In addition to looking for growth capital, she said founders should look for investors that have done something the founder is hoping to achieve, and that are willing to open their network to offer the connections needed to grow.

“You will have to improve and iterate on your business idea to get where you want to be,” she said. “Being able to adjust and learn and make changes, you have this partner that can help you with weathering that.”