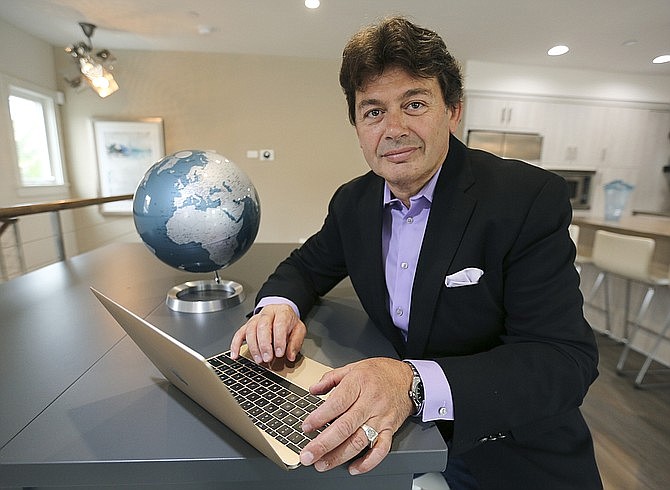 Kleanthis Xanthopoulos is the CEO of Irras AB, a medical device company that is part of an association health plan. File photo by Jamie Scott Lytle

On tap at Mike Hess Brewing: a health care headache.

The San Diego brewery planned to band together with small employers to buy less-expensive health insurance — until it couldn’t.

“Instead of joining the pool, we have to look for health insurance on our own,” said founder and owner Mike Hess. “It’s very frustrating because the cost difference is no small thing.”

California companies with fewer than 100 employees were recently barred from joining associations related to their industry to get better insurance rates.

The freeze came in response to a California regulator firing a warning shot against these so-called “association plans.” In the not-too-distant future the state will issue final rules deciding the fate of the insurance option.

“Alone we probably cannot offer the same benefits of a bigger company,” said Kleanthis Xanthopoulos, the CEO of Irras AB, which makes a device to treat hemorrhagic stroke, and is part of an association plan.

Heartburn over the matter began in July, when the California Department of Managed Care rolled out draft regulations saying businesses with fewer than 100 employees must buy small-group insurance. In other words, no joining forces with companies in the same industry to act like a large company.

In a statement the agency said the impetus for its action was Senate Bill 1375, which took effect in January. Put forward by then-Sen. Ed Hernandez, the bill codified existing state laws on the books restricting association health plans.

The department is working on final rules, but added “plans must still comply with the law.”

Two months ago or so, spooked insurers responded by freezing small employers from signing up for association plans. Existing members like Irras AB can keep this insurance option through at least 2020 — beyond that it is uncertain.

“We continue to wait for final guidance from the state and will again share with our customers,” said an Anthem Blue Cross spokesman.

As an idea of what’s at stake, an association plan under the California Life Sciences Association includes 85 employers with fewer than 100 employees.

Such trade groups count on the plans to boost membership — along with member perks like discounted supplies and policy advocacy.

“It’s a big piece of our association and our membership,” said Will Zasadny, director of communications of the California Life Sciences Association.

He added biotechs try to save money where they can to maximize research and development budgets.

A 2016 promotional video from Biocom, another trade group for California life sciences, said that on average its plan has saved member companies $1,000 per employee annually in premiums.

This doesn’t sit well with states like California. They argue the offerings siphon off these healthy workers, driving up premiums in Affordable Care Act plans.

“Basically it’s red versus blue as to whether states think association health plans are a good idea or not,” said Timothy Jost, an emeritus health law professor at Washington and Lee University, in an interview in September.

The Trump administration has pushed to expand the plans, an effort that a federal judge this spring invalidated and called an “end-run around the Affordable Care Act.”

Even if the Trump administration wins on appeal, states could largely choose to ignore its rules, according to Jost.

“This news has spread quite fast,” said Duenas. He added insurance carriers had hoped for final state rules by August or September, but it doesn’t appear those will come until next year.

Association plans covering small employers need a flow of new enrollees to keep rates in check. Duenas said the enrollment freeze didn’t affect rates for the 2020 plan, but if prolonged would be felt in 2021.

In California, many association health plans have gone belly up after only a few years because of failures to attract new enrollees. So said Craig Gussin, a licensed health insurance underwriter with Auerbach & Gussin Insurance and Financial Services in Carlsbad.

“Without new blood, rates go up, which is the kiss of death,” Gussin said.

Biocom launched its association plan about eight years ago, when biotechs’ access to capital dried up, forcing them to choose between sinking cash in benefits or drug development.

Dawn Barry, the president and co-founder of San Diego startup LunaDNA, is a fan of the offering.

“In addition to vision, medical and dental, we also have access to discounts for mental wellness, physical fitness, nutrition and telehealth,” she said.

Leia Ostermann Bailey, managing director of the California Craft Brewers Association, said about a dozen brewers so far couldn’t join its plan because of the enrollment freeze.

“We feel, honestly, a bit in limbo,” Bailey said. “We’re not sure if we’ll be able to add companies in the future.”

Hess of Mike Hess Brewing said in an industry with slim profit margins, many brewers don’t offer health benefits, including his own.

To change this, he pushed for the association plan. Further motivating the brewery, it will soon hit 50 full-time employees, a threshold in which employers must offer health benefits.

Denied entry to the health plan, Hess said he’s examining other options. So far none appear as enticing.

“For the state to come down on this, I don’t see how this fits with the state’s goal of driving brewery growth,” he said.