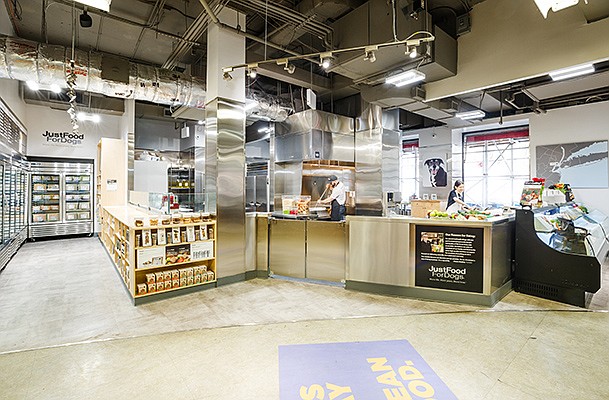 Petco in conjunction with JustFoodForDogs will open its first health and wellness kitchen for dogs at its flagship store in New York City. Photo courtesy of Petco

Petco Animal Supplies Inc., a San Diego-based pet supply retailer, in conjunction with JustFoodForDogs, a California-headquartered company that makes preservative-free food for dogs, will open its first health and wellness kitchen for dogs at its flagship store in New York City.

According to a news release, the JustFoodForDogs 1,350-square-foot kitchen to be housed at the Union Square location will prepare 2,000 pounds of fresh, human-grade pet food daily, seven days a week. All offerings are created by a team of in-house veterinarians and hand-prepared by trained chefs.

The opening will join existing standalone JustFoodForDogs kitchens in California, Seattle and others. Additional JustFoodForDogs locations are scheduled to open in the future in Boston and Chicago.

“Our partnership with Petco has allowed us to increase our national footprint, and with this new location, we’re making it easier to access our freshly-prepared meals, custom diet plans, health supplements and more,” Shawn Buckley, founder of JustFoodForDogs, said in a statement.

As of May 1, Petco stopped selling pet food with artificial ingredients, colors, flavors or preservatives for dogs and cats. JustFoodForDogs meals and supplements are already available at more than 1,000 Petco stores nationwide.

Petco plans to open four more in-store JustFoodForDogs kitchens in the next four years but wouldn’t confirm if a San Diego Petco store would be one of those locations.