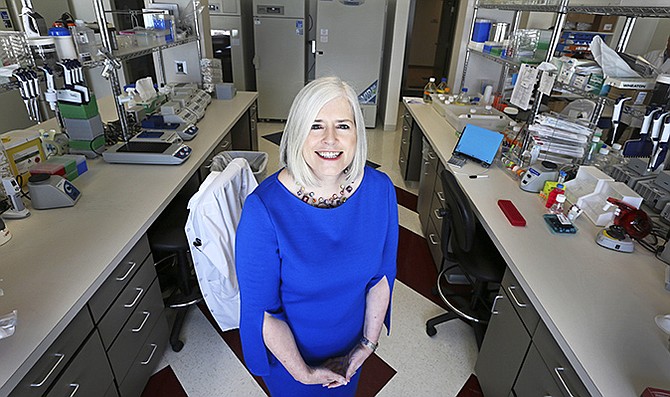 Helen Torley is the CEO of Halozyme, which delivered a strong first quarter. Photo by Jamie Scott Lytle.

San Diego-based Halozyme reported higher revenue and net income in first quarter results, thanks to the company’s platform technology. Looking forward, the company is heading for an inflection point.

Revenue came to $56.9 million in the first quarter, an 84 percent year-over-year increase, according to Halozyme.

The jump was primarily due to a $30 million upfront licensing fee from Argenx. The Netherlands-based company will use Halozyme’s enhanze — a platform that delivers drugs under the skin, or subcutaneously, an alternative to time-consuming infusions.

Remaining revenue came from royalties and product sales stemming from other enhanze deals. The company expects full-year revenue of $205 million to $215 million.

Other than enhanze, much rides on Halozyme’s therapeutic candidate called pegph20 in a late-stage clinical trial, or phase 3, for metastatic pancreas cancer. The company anticipates topline clinical trial results in the second half of the year.

In the first quarter Halozyme spent $31.3 million on research and development, or 18 percent less than the prior year period, on account of less clinical trial activity.

Selling, general and administrative expenses rose from $13.6 million to $18 million during the quarter, partly because the company is gearing up for the potential launch of pegph20.

For that to happen the U.S. Food and Drug Administration would have to give its OK.