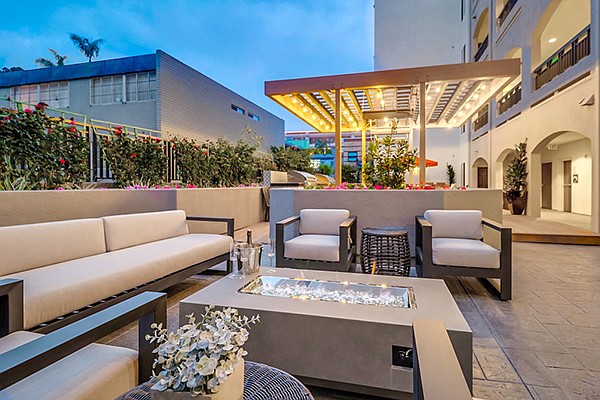 A living room in The Park with private elevator in the background. Photo courtesy of Zephyr 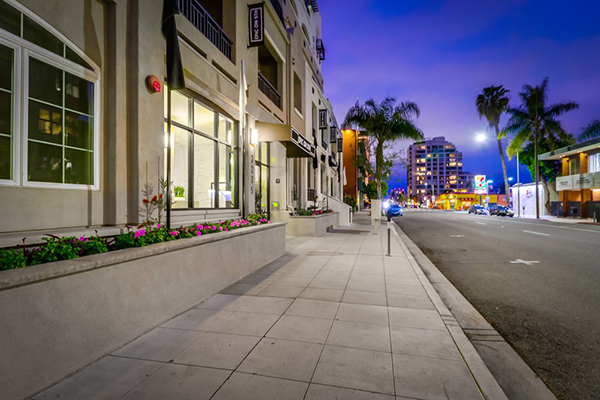 A Bankers Hill apartment complex has been converted into condominiums and renamed Epic on 5th. Photo courtesy of Next Space Development

Harkening back to the heady pre-recession days of the housing boom, a San Diego developer has converted a Bankers Hill apartment complex into condominiums that are selling at a price well below newer projects in the neighborhood.

Renamed Epic on 5th, the project at 3275 Fifth Ave. has 25 units with prices that range from about $686,000 to about $1.5 million, said Rudy Medina of Next Space Development, the developer.

“Our market is the demographic that lives in Hillcrest and Bankers Hill already — double income, no kids and empty nesters that want a more affordable option,” Medina said. “We’re also getting multiple out-of town buyers that want to live near Balboa Park and can’t afford the other luxury buildings.”

“That whole corridor has kind of morphed itself into a million-dollar plus condominium market,” Medina said. “You can’t be a regular person and buy a unit.”

Even couples with two incomes can’t afford many of the new projects. Medina said.

“That’s what we’re trying to offer,” Medina said. “We’ll probably be the last (Balboa) park corridor project that has units starting in the 600,000s.”

Next Space Development bought the Epic on 5th property — formerly The 25 on Fifth apartments — for $14.5 million in June 2018 and spent about $3 million renovating it.

“We just thought it was a great opportunity because we build apartments and we also build condominium projects and buy and renovate both,” Medina said. “We got lucky because this was an existing project that was already built as condominiums. We didn’t have to do major upgrades to the building except the finishes.”

Even so, the property had been virtually untouched since it was built.

“Everything in there was original — the appliances, everything, even the carpets,” Medina said.

The renovations included redoing the kitchens and bathrooms with quartz counters in the kitchen, simulated wood floors throughout and new Samsung appliances.

“It looks new because we put money in key locations,” Medina said.

The condominium units are all flats, ranging from 1,166 square feet to 2,858 square feet with two to three bedrooms, up to 3½ bathrooms, outdoor decks, vaulted ceilings and two secured parking spaces per unit.

The courtyard has barbecue stations, a dining deck with heat lamps, a large seating area and fireplaces.

“We just made the outdoor space that wasn’t being used or wasn’t pedestrian friendly, we made it super nice,” Medina said. “It’s just gorgeous.”

Medina said it’s unlikely his project will revive the pre-recession trend of converting apartments to condominiums.

This was a special circumstance, Medina said, because Epic on 5th was built as condominiums in 2008 just before the housing market collapsed. It was converted to apartments when the condos didn’t sell.

“Nobody could sell condos,” Medina said. “It just went from being used as a rental for 10 years to its original intent — condominiums.”

Rick Snyder, a real estate lecturer at San Diego State University, said Epic on 5th was “a one-off” and not a return to a time when condo conversions were common.

“The numbers in terms of the financial impact of development and consumer demand is focused on the rental market and not on conversion of apartments, like we saw,” Snyder said. “I just don’t see the economics playing out in the same manner as they did then. Consumer demand has shifted for a variety of reasons into the rental market with a lifestyle that is affordable to residents.”

Many of the amenities in today’s rental projects are equal to or even surpass those once offered only in for-sale condominiums, Snyder said.

Added to that are the lingering effects of the recession, in which many people lost their homes.

As a result, some people in their 20s and 30s are reluctant to buy, Snyder said, preferring the mobility and flexibility that renting offers without putting a big chunk of their money at risk should the for-sale market collapse again.

Although Epic on 5th may not represent a trend, “it seems to me it’s good timing,” said Norm Miller, Hahn chairman of Real Estate Finance at the University of San Diego.

“If you’re going to pull the trigger, it makes more sense now than six months or a year from now,” Miller said.

Hold On to That Property

He said the looming trade war with China could drive up interest rates later this year or in 2020.

Also working against additional conversions is the volatility of the stock market.

Many apartment complexes are owned by institutional investors, who are more likely to hold onto their property and collect rent when the stock market is unpredictable.

“It’s not a bad time to own and hold real estate,” Miller said. “This is the more conservative thing to do.”