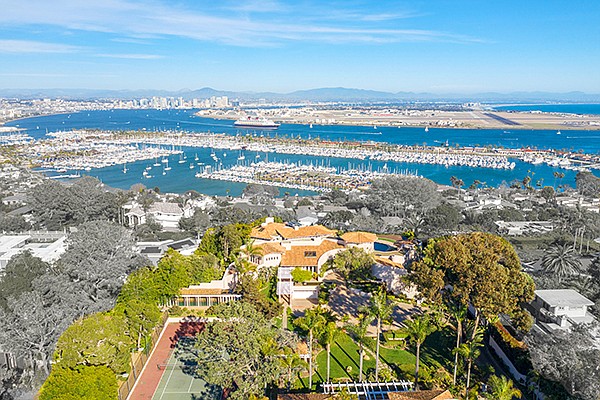 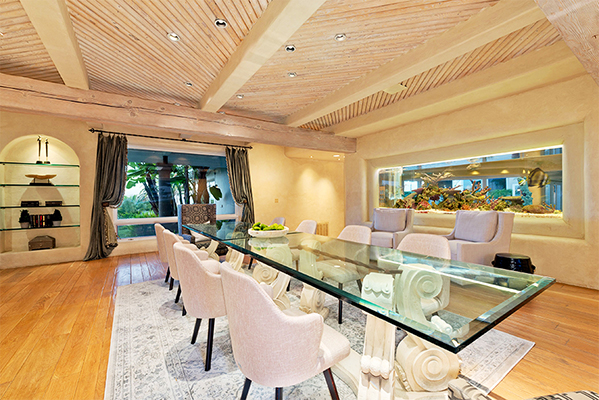 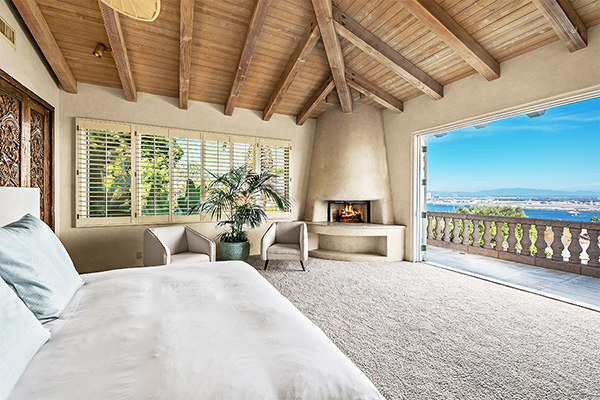 The upward sloping drive to this exceptional Point Loma estate leads past a two-story guest house at the bottom of the property toward a large motor court with a whimsical fountain in its center. Along the drive on the left, an arrangement of stepping stones cuts through the center of a large swath of green grass; mature tropical landscaping foreshadows the ambience of the interior. A wide stone stairway leads to a balcony and the massive wooden front doors of carved, frolicking porpoises.

It’s from this moment the world falls away.

The view is all-consuming. The eye is immediately drawn to a banquet of bay views, blue sky, city skyline, hundreds of boats in the harbor, cargo and cruise ships coming and going, Coronado, mountain ridges and the vast expanse of open sea beyond.

Elizabeth Courtier, a realtor with Willis Allen Real Estate who has a degree in finance with an emphasis in real estate and a specialized designation from the National Trust for Historic Preservation, said this was exactly what the owner intended when he built the home.

The owner, along with his contractor, modeled the home after Del Mar’s Rancho Valencia Resort & Spa, a Mediterranean-inspired, luxury, five-star resort on 45 acres of lush gardens and olive groves, as well as resorts in Mexico.

“He really wanted it to feel like the minute you entered those private gates, you were a world away, which I think he was very successful in (achieving), Courtier said. “You definitely feel that way when you’re there — it was a total labor love.”

The overarching goal was to provide every resort amenity that one could want. Some of those are: a lighted tennis court with a viewing pavilion, a fitness lap pool and spa in a separate wing and an inviting J-shaped “sunning” pool facing the view. The pool is surrounded by a large stone and wooden deck area that can be accessed from many points of exit from the home and is suitable for large gatherings or intimate parties.

The three-story home is 11,925-square-feet (including the separate guest home) with five bedrooms, two optional bedrooms for family or staff, seven full baths and two half baths. There’s a two-car garage attached to the main home and because the owner is a car collector “a detached car collector’s garage that can accommodate at least eight to 10 cars,” Courtier said.

With a lot size of 1.66 acres, “it’s on one of the largest lots in Point Loma,” she said. In addition to its size, it’s mostly level, which Courtier says is exceedingly rare in Point Loma “most lots of this size are on an unusable canyon.” The listing price is $12.9 million.

Designed as a series of pavilions with multiple seating and entertaining spaces, the neutral decor blends into the surrounding environment. Soul-soothing sea breezes waft in from every direction.

“One of the genius things in the way that he sited it and designed it is that he made it exceedingly private; when you’re in your property, you’re literally private, no one can see in on your property or anything,” Courtier said.

The master bedroom is the piece de resistance; designed as a true master suite where indoor and outdoor spaces coalesce around the mesmerizing views.

“I would say about a third of the square footage is the master with the big seating area with huge panoramic views, nice large bath, large closet space, everything, everything anyone would be looking for — it really is a retreat.”

Courtier said that the owner incorporated carved wooden doors from churches in Mexico into the master retreat, as well as elsewhere in the home.

“He was really trying to weave in an appreciation of our Spanish architecture,” she said.

Another aspect of the way the home is designed, according to Courtier, is that it could just as easily be lived in by a couple or a family.

“It’s just so easy to manage your space,” she said. “That’s why I think that the way that he did this is so genius.”

Another significant installation in the home is a large saltwater fish tank with live coral and tropical fish on display between the dining room and the living room.

“It’s incredibly transporting; it’s so peaceful,” Courtier said. “I literally walk in and say hello to the client’s dog and go and say ‘hi’ to the fish, because it’s so, so beautiful.”

The home was built in 1991 by the current owner and this is the first time it’s been offered for sale.

“He was very specific about how he wanted the house to live,” Courtier said. “Like anybody, when you work really hard all day, you just want to be able to come home and have a place where you can just relax with family and friends and feel like you’re on vacation.”