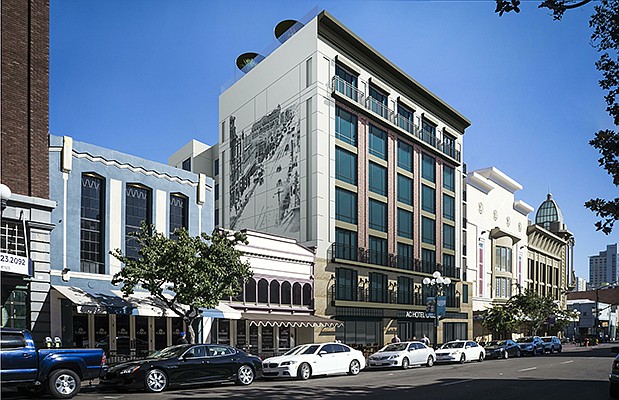 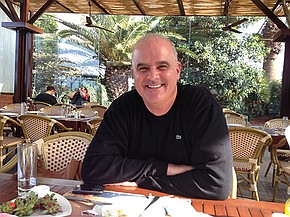 Downtown San Diego is about to get a new boutique European-style hotel in the heart of the Gaslamp Quarter — the first to carry the AC Hotels by Marriott brand.

Estimated to cost $35 million, the 147 room hotel at Seventh Avenue and G Street is meant to cater to younger travelers and business leaders looking for a trendy place to stay with an urban vibe.

Aster Construction Services Inc. is building the seven-story hotel on an 11,500 square-foot site that is especially challenging because the lot has an odd shape, stretching from Fifth Avenue to Sixth Avenue with a narrow 40-foot wide frontage on Sixth Avenue.

The site also has an historic wall on the Sixth Avenue side that must be preserved — the Gaslamp Galleria Building façade.

To make room for the hotel, a vacant two-story building at 743 Fifth Ave., that until recently was home to a T.G.I. Friday’s restaurant and McFadden’s Restaurant & Saloon will be demolished.

Because the historic wall is fragile, the existing building must be demolished by hand with no heavy equipment, said Wadih Eddie Daher, president of Aster Construction.

“This is a big challenge for this property,” Daher said, requiring special reinforcing material beneath the wall to support it.

The site itself also is so constrained that Civic San Diego, told the builder that he should build the hotel with no on-site parking.

Civic San Diego has lost its authority to approve downtown construction projects as part of a lawsuit settlement but the AC hotel was approved prior to the settlement.

Originally, hotel plans called for 44 underground parking spaces, but Civic San Diego said cars entering and exiting an underground lot on Sixth Avenue would be a danger to passing pedestrians.

Similar hotels of nearly the same size also would be exempt from parking requirements, according to Civic San Diego.

The AC Hotels by Marriott brand gets its name from Antonio Catalan, who founded AC Hotels in Spain in 1998.

Designed by Tucker Sadler, the hotel is meant to reflect the historic nature of the Gaslamp Quarter with “a little bit of a modern flair to it,” said Greg Mueller, CEO of Tucker Sadler.

The Fifth Avenue façade of the San Diego version will have balconies with decorative metal railings, and a steel canopy with lighted signs.

“We added an outdoor seating area off the main lobby that ties the hotel to Fifth Avenue,” Mueller said. “The whole side opens up so it flows inside and out.”

The first floor will include 1,200 square feet of restaurant space with outdoor seating.

The Sixth Avenue side will incorporate the two-story historical façade of brick with an existing recessed storefront at the ground floor and random window openings on the second and third levels.

Four new guestroom levels will be built above the existing façade. Each guestroom facing Sixth Avenue will have a private French balcony with metal railing and doors that open.

Among the amenities that Daher said will make the hotel standout are a rooftop bar, spa and lounge.

“It’s going to be the highest building in the area, so it’s going to have beautiful views,” Daher said.

Robert Rauch, CEO of RAR Hospitality, said the new hotel will bring a European aura to the Gaslamp Quarter.

The brand is sort of in between Marriott’s classic offerings and its super-hip Moxy brand, which opened a 126-room hotel in San Diego at 831 Sixth Ave., promising to “flip the conventional hotel model on its head.”

“It’s not as old a demographic as say, a Marriott Courtyard, and not as young as a Moxy. It’s probably business travelers in their 30s and 40s, not so much families,” Rauch said. “The food and beverage program is very different. It’s not a real full-service restaurant. It’s more like a tapas bar where you go in and order various appetizers and drinks but you wouldn’t take someone there for a full dinner.”

Aster Construction’s first entry into the San Diego market was the $20 million Theatre Box next to the hotel site at what was once Pacific and Reading Cinema.

Taking up and entire block, Theater Box opened in December with a Sugar Factory American Brasserie, a Chocolate Lounge and a TCL Chinese Theatre Box that has eight dine-in theaters on the second floor.

The hotel and theater projects are a homecoming of sorts for Aster Construction, which Daher formed in San Diego in 2005 and later partnered with Alan Hajjar, who restored a number of Hollywood restaurants, including the Pig ‘n Whistle.

The company started out doing some remodeling and residential work in San Diego County, Daher said, then moved out of the country during the recession, doing projects throughout the Middle East.

The company is now headquartered in Los Angeles, with offices in the Gaslamp Quarter of San Diego.