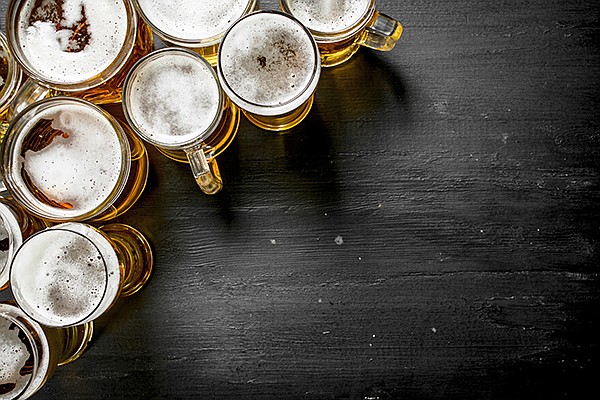 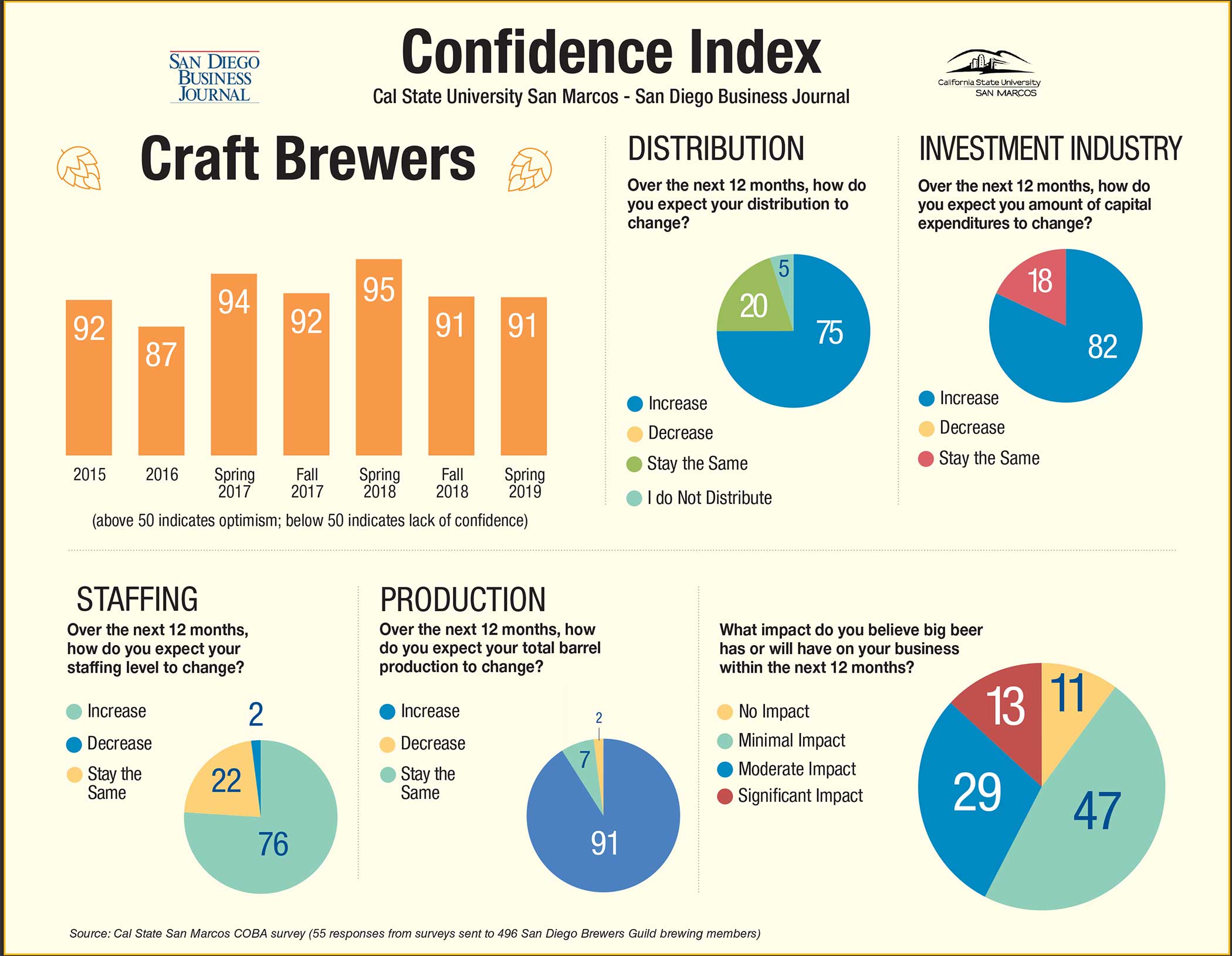 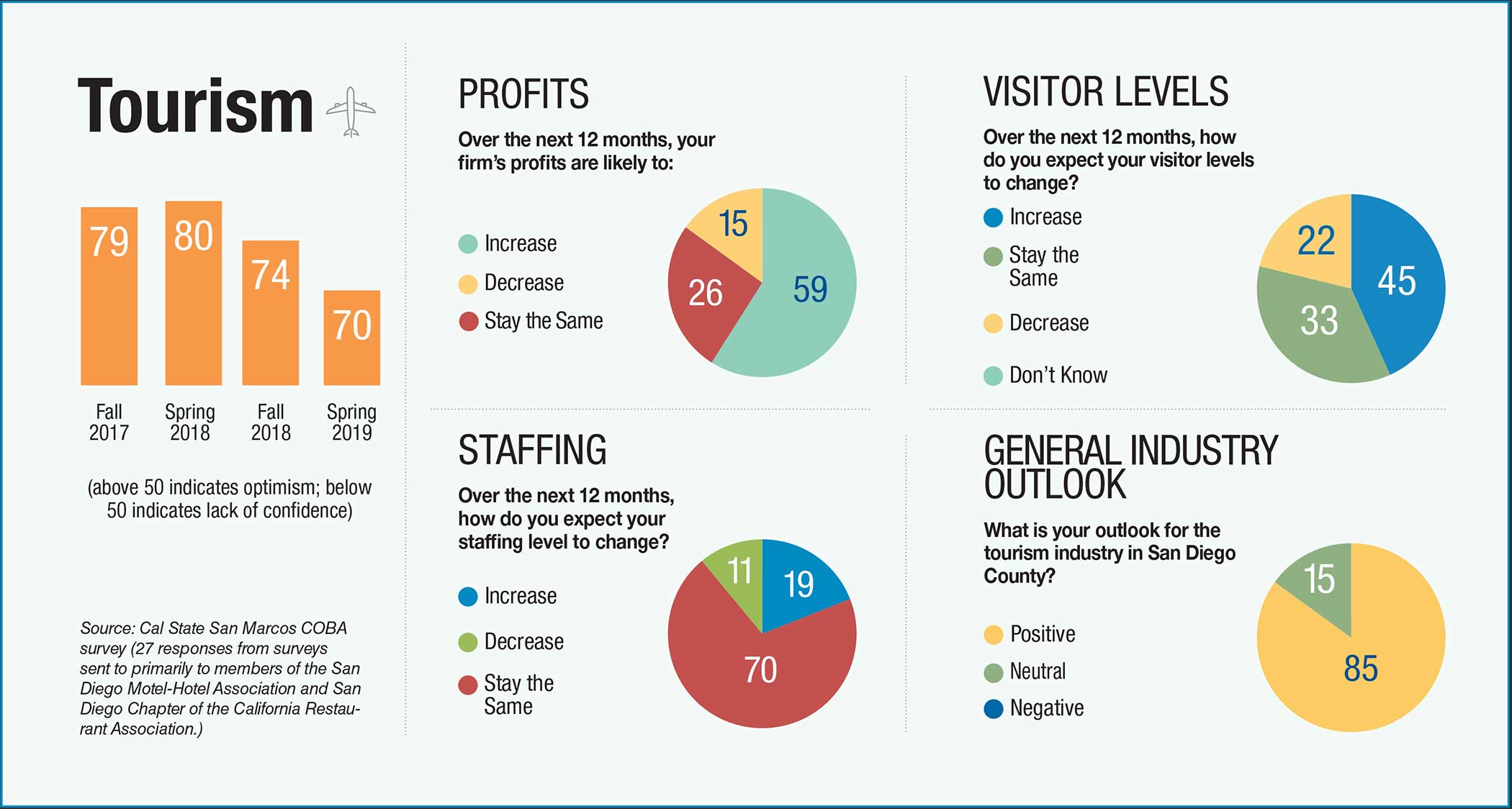 The consensus of the previous Craft Brewer Confidence Index survey, released in November, was that the San Diego craft beer industry wasn’t too worried about the presence of big beer. Six months later, according the latest report, it appears some of the local brewers are finally fed up with it being there and the influence it is having on some of the smaller guys.

Still, despite craft brewers’ increasing unease toward big beer, optimism remains high in the sector, according to the results of the spring survey.

The same positivity seems to be prevalent in the tourism industry, this according to the recent results of the Tourism Confidence Index spring 2019 survey. That analysis was administered to about 550 contacts in the market, of which 27 responded. This included hotels and motels, museums, golf courses and resorts and restaurants.

In terms of profits in the tourism industry, 59% of participants believe it will increase over the next 12 months. Forty-four percent of respondents anticipate an increase in attendance and visitor numbers and 33% think that figure will remain the same. Meanwhile, 19% of respondents believe employment levels in the industry will increase, while 70% said the count will stay as is. Overall, 85% of those surveyed have a positive outlook on the tourism industry in general.

The latest indices were developed by the California State University San Marcos (CSUSM) College of Business Administration and the San Diego Business Journal. Since fall 2015, CSUSM has conducted a Craft Brewer Confidence Index survey in partnership with the San Diego Brewers Guild (SDBG). Since fall 2017, CSUSM has compiled a Tourism Confidence Index survey with the aid of the San Diego Hotel-Motel Association (SDHMA) and the California Restaurant Association (CRA). In spring 2019, CSUSM brought along a new partner for the Tourism Confidence Index: ReferenceUSA, a company that provides business and residential information for reference and research purposes.

All confidence indices are measured on a scale of one to 100. A score above 50 indicates confidence in the industry; a score of 50 means a neutral outlook; and a score less than 50 suggest a negative viewpoint.

Participants in the latest craft beer survey didn’t mince words when asked to comment on the impact of big beer.

Despite the broadsides, numbers show the industry is still confident in its outlook. In fall 2016, the Craft Brewer Confidence Index measured 87, the lowest number in the past three years. It was 95 in spring 2018, marking the highest in the same time frame. The spring responses mark the eighth consecutive survey since 2015 showing a positive outlook for craft brewing.

Paige McWey, executive director of the San Diego Brewers Guild, said in order to keep the momentum going despite big beer’s presence, craft brewers need to continue to educate patrons and support one another.

“In a time when larger organizations are competing for market share, it is even more important than ever for our industry to focus on consumer, stakeholder and partner education about the meaning of independent craft as well as the important of supporting independent craft for our local economy,” she said.

According to the San Diego Tourism Authority, tourism is the second largest industry in the county with the city hosting nearly 35.8 million visitors each year and guests spending nearly $11.5 billion annually. Thus, it should come as little to no surprise that the tourism confidence index results for spring 2019 remain optimistic.

Namara Mercer, executive director at the San Diego County Hotel-Motel Association, said, although there is slight concern that the tourism industry can experience a slowdown soon, the county is currently experiencing some of the “best years” in tourism.

“Tourism is the second largest economic driver even next to military in San Diego and I think people are optimistic it is going to continue to thrive,” she said. “But people are also concerned that in coming years, it will soften a bit because it has been on such a high for so long.”

Joe Terzi, president and CEO of the San Diego Tourism Authority, said while there will be a slight decrease in tourism numbers in the future, the city’s tourism future is still promising.

“We have had eight years of success and growth,” he said, adding that the hotel occupancy has been about 80 percent. “When you reach such a high level, it is hard to continue to grow. But, still, we see the industry thriving. We might not increase six or eight percent like we have done the last few years. But, we will still see somewhere between one and three percent in growth.”

Terzi said conventions for the city are booked for the next three or four years and, as a result, he knows the next couple of years will be strong based on contracted room nights. He also said, because of the bad weather starting at the top of the year, 2019 won’t be a record-breaker. “But, my level of confidence says it will still be a good year,” he said.

Hence, while the tourism industry remains confident in its future, there has been a decrease in the confidence level compared with results from the past two semesters. The spring 2018 survey had a score of 80.44, and the fall 2018 had an index of 74.14. Still, the spring 2019 result of 69.91 marks the fourth consecutive positive outlook for tourism.

Overall, “everyone is feeling pretty good about the industry currently and its contribution to the city of San Diego,” Mercer said.