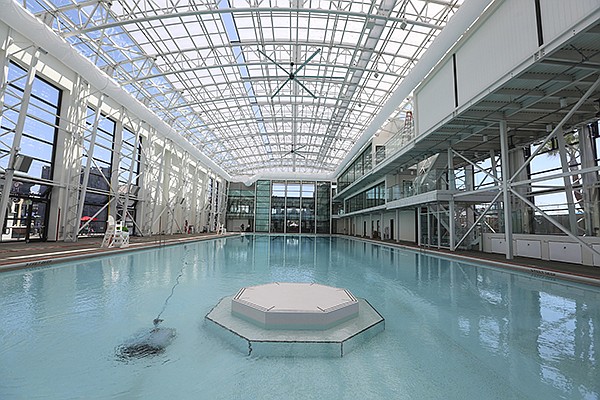 The historic Plunge swimming pool in Belmont Park has been completely rebuilt with a glass façade and a glass and aluminum retracting roof. Photo by Jamie Scott Lytle. 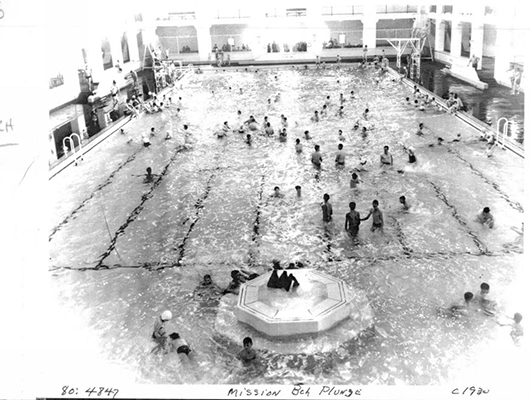 The Plunge was a major attraction from its early years. Photo courtesy of Lusardi Construction Co. 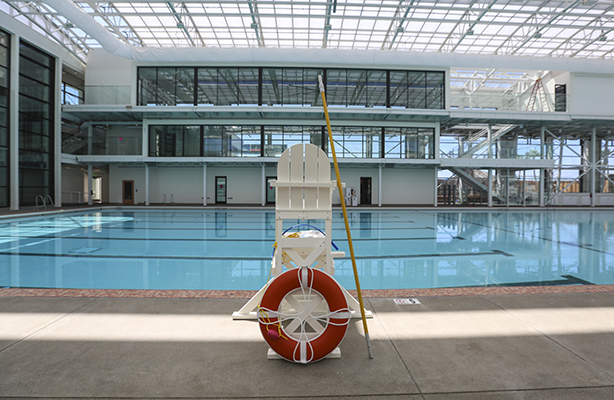 A two-story mezzanine overlooking the swimming pool will be used by Fit Mission Beach gym, which also takes up the south end of the new building. 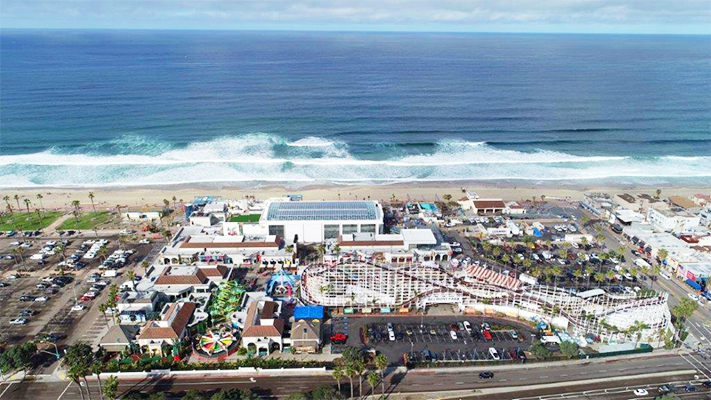 The Plunge in the background and the Giant Dipper Roller Coaster in the foreground are the centerpieces of Belmont Park, both built in 1925. Photo courtesy of Lusardi Construction Co.

A swimming pool that had become a San Diego landmark is about to reopen at Belmont Park.

Shuttered as unsafe in 2016, The Plunge has been transformed by the Lusardi Construction Co. from an aging relic to a prime example of modern engineering and design while retaining historical touches tracing back to its original construction in 1925.

Gone are the crumbling plaster walls — replaced by shiny aluminum framing, glass windows that reach to the ceiling around most of the building to create a glass façade, and a retractable aluminum and glass roof.

Built by John D. Spreckels, the Plunge was hailed as the largest saltwater pool in the world and the biggest swimming pool on the California coast when it opened. The renovated pool uses fresh water.

Pacifica has a long-term contract with the city to operate and make improvements to Belmont Park.

The company has invested more than $20 million in the park.

Final figures for the work on the Plunge weren’t available, but the most recent estimate was $11 million.

Along with the Plunge, Belmont Park is home to one of the few remaining wooden roller coasters in the country — the Giant Dipper, also built in 1925 and listed as a National Historic Landmark in 1990.

Rebuilding the Plunge was especially challenging because it had fallen in such disrepair with far more structural damage than anticipated, said Collin Howell, Lusardi project manager.

“It was falling apart,” Howell said. “There were portions of the roof that were becoming unsafe. The frame itself was in just as poor condition.”

Formed in 1958 in Vista by Warner Lusardi and his father, Peter, Lusardi Construction is based in San Marcos with a Northern California office in Dublin.

The company earns about $300 million a year in revenue, according to Michelle Bayer, head of marketing and business development.

The Plunge building was too far gone to repair, so it was torn down and the pool itself was scraped clean down to the concrete lining.

“We chipped the pool shell down to concrete and built new shotcrete walls on the sides,” Howell said. Shotcrete is a form of concrete that is sprayed onto a surface.

The old Plunge building was made of plaster on chicken wire, and plaster breathes, allowing salt air to penetrate the exterior walls and form rust on the supporting steel and wire inside the plaster, said Scott Foster, Lusardi project supervisor.

“As the chicken wire rusted, chunks of the building fell off. There was no way to seal the cavities,” Foster said.

The new building has an air barrier, sealing it from the elements.

“It will keep the salt air and chlorine out,” Foster said.

To rebuild the pool itself — which measures about 175 feet by 65 feet — about 14,000 square feet of tiny white and black tiles were special ordered to re-create the historical look of the bottom and sides of the pool.

“We had tile fabricated especially for this project to match what was installed previously. The details, the dimensions, the colors, the patterns in the pool itself are all historical,” Howell said

To give an added historical touch, decorative arches that matched the original were installed in doorways on the east and west side of the building.

The original arches were destroyed when the old building was demolished, so new ones were fashioned using 3-D printers, working from photographs.

Lusardi also rebuilt a pedestal in the shallow north end of the pool, and much of the equipment to keep the pool running had to be replaced.

New public lockers also were installed, as was a concrete bulkhead separating lap swimming lanes on the south end from the recreational swimming area on the north end.

Covering the new structure is a curved, 21,000 square-foot retractable glass and aluminum roof built by OpenAire Inc. based in Canada.

The retractable roof forms a kind of sunlight and is about 103 feet wide and nearly 204 feet long.

The mezzanine is part of the Fit Mission Beach gym that takes up the southern portion of the Plunge building, including a rooftop workout area.

Resurrecting the Plunge was especially satisfying because of its historical significance and community connections, said Thomas, the general manager.

“People are emotionally tied to this. There’s a lot of history here. People have grown up swimming in this pool,” Thomas said. “I came to this place as a kid as well.”

Thomas said the Plunge will be the model for other projects Pacifica Enterprises hopes to bring to Belmont Park.