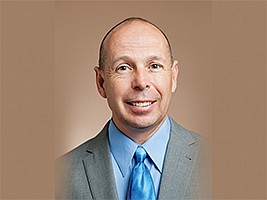 He was CIO of one of the major airlines during the Sept. 11 terrorist attacks.