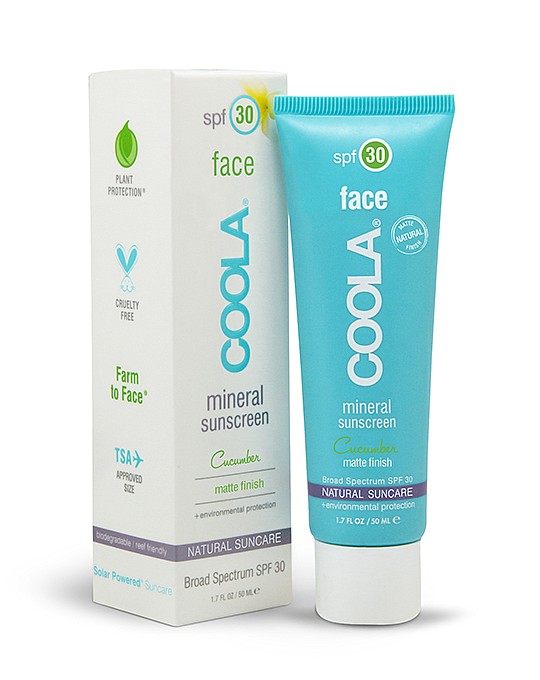 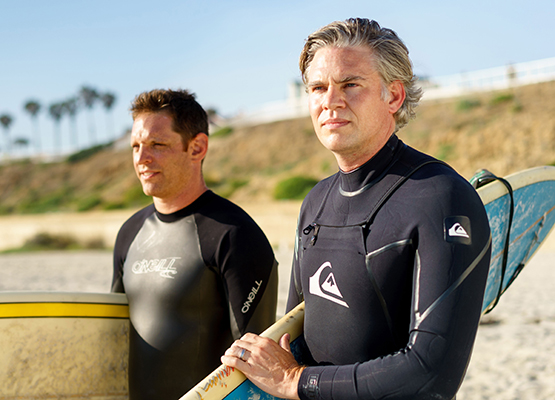 When both of his parents were diagnosed with melanoma skin cancer, Chris Birchby, right, was inspired to create his own mineral-based, all natural and organic sunscreen. To the left is Eric McCue, president of Coola LLC. Photo courtesy of Coola LLC

No. of Local Employees: Approximately 50

Company Description: An eco-conscious suncare company that uses natural and organic ingredients in its sunscreen formulations.

Sometimes, you don’t get it right on the first try — just ask Coola LLC founder and CEO, Chris Birchby.

When both of his parents were diagnosed with melanoma skin cancer just months apart from each other in the early 2000s, Birchby, who was attending the ArtCenter College of Design in Pasadena at the time, was inspired to create his own mineral-based, all natural and organic sunscreen.

After hitting numerous roadblocks, including an initial iteration that didn’t meet SPF requirements, a second batch that had the wrong ink on the packaging and a third round which was all lost in a warehouse fire, Birchby’s Coola — a name inspired by the Bella Coola region of British Columbia — finally hit the market in 2007.

Today, Coola LLC, the parent company to Coola and sister company Bare Republic (launched in 2015), has approximately 50 full-time employees and is headquartered in a 43,500 square-foot building in Carlsbad. Coola face, body and active sunscreen products are sold in stores like Ulta Beauty, Sephora and Nordstrom and e-commerce platform Amazon. They are also available at properties like Four Seasons Hotel Los Angeles at Beverly Hills and Fred Segal Apothecary in Santa Monica, among other locations. According to Birchby, Coola LLC has annual revenue of approximately $40 million. He added the company has seen a growth of 70 percent year-over-year.

Birchby, who was raised in New Jersey and received his bachelor’s degree in English and art from Lafayette College in Pennsylvania, said he was first introduced to the term organic after moving to Venice around the summer of 1998.

“Living in New Jersey, organic anything just wasn’t a thing at the time,” he said. “Living in Venice, I’d see organic cleaners and organic food products. After my parents were both diagnosed with melanoma — fortunately, they both caught it in time — it was during my first trip to the dermatologist that I had my first reality check of all the sun damage I’d gotten so far in my life.”

Birchby said he and his three brothers would go to a summer house in Long Island, New York, as kids and stay out in the sun all day, tanning and sometimes even blistering on their noses and shoulders. After searching for better sunscreen options and not finding the results he wanted, he set out to create his own healthy, wearable sunscreen.

To get started, Birchby went to a small lab in Los Angeles run by two brothers who’d previously worked with a cosmetics company. They made a sunscreen formula that was smooth and light, but when Birchby went to get it tested for SPF, instead of coming back with a 30 grade or higher, it came in at a two. When he went to the brothers demanding a better product or his money back, they told him they wouldn’t pay him back and were, in fact, shutting down their production.

The then inexperienced Birchby was out about $30,000, but still had enough money, which he’d won playing online poker, to try again. This time he found a bigger lab, a one-stop shop also in Los Angeles, that offered not only a good sunscreen option which tested just right for SPF, but also offered to silk screen the tubes as well. When Birchby went to check out the final product, the silk screen came right off each of the packages. Turned out, the company had used the wrong ink. When Birchby went back to try to get his money back from that company, they told him the best they could offer was 30 cents to the dollar. Birchby, knowing it was that or nothing, accepted.

He took the money and, with the help of a mentor, he found a third Los Angeles-based lab, which created “a beautiful product,” according to Birchby. At this point, through trial and error, he was more familiar with the process, and knew he wanted to make his sunscreen premium quality. So, he had everything, from the formula to the packaging, tested beforehand and knew it was the right product. Right before that iteration of Coola was ready to go to market, the warehouse in which the products were stored caught on fire and Birchby lost the entire inventory. When Birchby approached them about it, they told him they had no insurance and couldn’t pay him back 100 percent of the money he had invested. Instead, they also offered him 30 cents to the dollar, which, he again walked away with.

It was 2006 and after going through multiple unsuccessful versions of Coola and becoming disheartened, Birchby was ready to quit. He shifted his focus back to poker and painting, the latter of which he was doing in a studio in downtown Los Angeles at the time. And, he was doing OK for himself. But, he found himself questioning his purpose.

“I was spending a lot of time by myself in the studio, almost every day,” he said, and he started to ask himself, “What am I really doing? What am I contributing? What am I making?” He realized then, although he was making decent money gambling and fulfilling his artistic needs painting, he had a personal connection with and responsibility to Coola.

While going through the ups and downs, Birchby continued to attend multiple trade shows, events and meetings related to suncare and building insight and relationships in the industry. The effort paid off as it brought along his first set of clients after he finally found the right lab to partner with.

“Throughout the process, I not only learned a lot about ingredients and the process but also met a lot of potential accounts that became invested in my story,” he said. He began to bring them various formulas and scents, getting feedback and incorporating the feedback into new iterations of the product until he got it right, he said. By the time Coola went to the market, Birchby said he had several accounts that had seen the story unfold and wanted to be a part of it, including the aforementioned Fred Segal and the Four Seasons.

After that, Ulta was the first big box retailer partner Coola obtained, followed by Sephora and Nordstrom around 2013. And the rest followed.

Birchby said Coola uses ingredients that are natural, organic, sustainable, plant-based and locally-sourced whenever possible. The sunscreens include algae and red raspberry seed oil and are paraben, GMO and oxybenzone-free. Bare Republic isn’t organic, but is mineral-based, thus, sold at a more affordable price point. Around 2015, the sister company came to be when a Target representative approached Birchby about creating an exclusive line for the retailer.

Today, Bare Republic is also available in Ulta and will further expand distribution this year to 10,000 new locations, including Walgreens and Walmart stores nationally. Recently, Coola LLC trademarked the word “funscreen,” which describes its Bare Republic line of pigmented sunscreens that is available in vibrant tones like gold and neon hues.

Miro Copic, marketing professor at San Diego State University, said getting in a big box retailer like Target first was a good move for Bare Republic and the overall growth of the Coola LLC brand.

“To have a consumer company (like Coola LLC) with its brand in a successful and highly competitive retail channel like Target says a lot about the brand and its capability to move sales,” said Copic, adding the tinted sunscreen option is “fun and different” and, as a result, can appeal to a younger demographic. “It should do well in Ultas and Sephoras because it is a great play for potential fashion influencers who would promote the different color hues as something new and different.”

Still, Copic cautioned that, albeit distinct, the challenge will be to sell in stores like Walmart and Walgreens, where there are already a lot of well-known sunscreen brand options for consumers to choose from.

Birchby credits part of the Coola LLC success to the company’s approach of owning a lot of its processes and continuing to improve the product year-over-year.

“We do a lot of our procedures in-house ourselves,” he said, “instead of relying on third-party vendors as much as possible.” This includes marketing, creative, sales, finance, accounting, product development, innovation and analytics. Birchby said the company has 30 to 40 additional temps that work in the Carlsbad warehouse for about a six-month period each year as well as 40 to 50 outside sales reps around the country.

Later this year, Birchby said Coola LLC will launch its products in a “large athleisure company that has the perfect demographics for us.” He also said that doctors’ and dermatologists’ offices are a growing sector for the company as well.