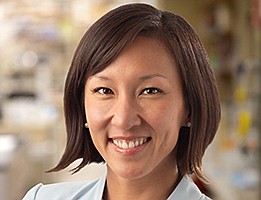 Salk Institute for Biological Studies professor Kay Tye has been recognized for her contributions and dedication to advancing science through research by being named to the Wylie Vale Chair.

“Kay Tye’s scientific boldness and reputation for excellence in mentoring are a fitting tribute to the memory of Wylie Vale,” Salk President Rusty Gage said. “We are extremely grateful to Liz Keadle for endowing the Vale Chair and delighted to welcome Professor Tye to the Salk faculty.”

Liz Keadle, a Salk trustee, established The Wylie Vale Chair. Vale spent more than 40 years conducting groundbreaking research at the Salk Institute until his death at 70. Keadle said supporting Salk researchers is an honor and that she is “excited to support Kay’s important research in mental disorders and brain circuitry.”

Tye joined the Salk Institute in 2019, from the department of brain and cognitive sciences, Picower Institute for Learning and Memory at the Massachusetts Institute of Technology. At Salk, she is a member of the systems neurobiology laboratory, where she leads a team using a wide variety of cutting-edge techniques to better understand the brain’s circuitry underlying emotion and motivation.