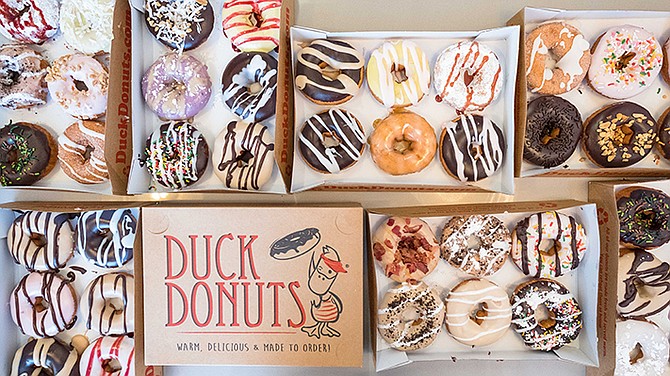 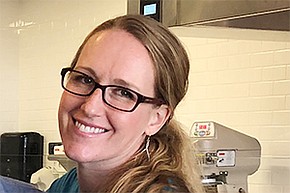 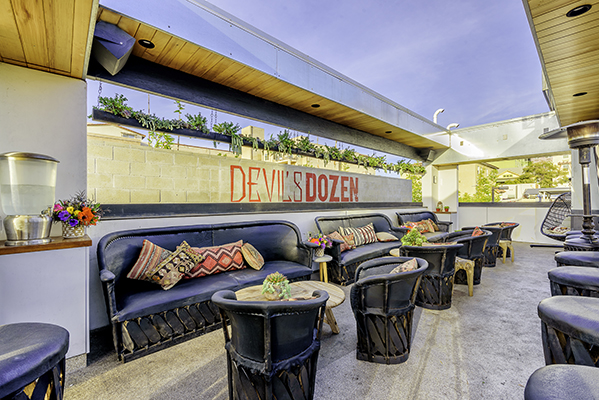 Devil’s Dozen, which has a rooftop patio with views of the harbor, serves about 150 customers on the weekends and up to 75 customers on any given week day. Photo courtesy of SDCM Restaurant Group

As San Diego continues to establish itself as a culinary destination and with the continual growth of the made-to-order trend, the cookie-cutter version of the donut shop is slowly becoming a thing of the past. Instead, more specialty doughnut shops are popping up around town and offering a more customized approach, including build-your-own options and new flavors like tres leches and Nutella hazelnut that can be topped to customer specification.

Laura Manley Aughinbaugh, owner of Duck Donuts in Encinitas, said the new, quasi-experiential version of the donut shop is becoming more popular in Southern California as a result of the ongoing create-your-own trend, which allows patrons to personalize their food and beverage purchases to their liking.

“The whole ‘made-to-order’ option is what’s created the boom in San Diego,” said Aughinbaugh, who opened her location last October and has served 23,000 guests since. She adds that specializing a treat like a doughnut is even more enticing to consumers in the county because it has been such a staple of the local culture.

“Doughnuts are a timeless treat — it is like having a little piece of your childhood all over again,” she said. “I was honestly surprised that something like this didn’t already exist in San Diego. I think this is a great accent to our culinary culture.”

Although Aughinbaugh couldn’t share revenue figures for her 6-month-old shop, she did say what has lines outside the door of her store is that, unlike the mom-and-pop donut shops that San Diegans have grown up on, Duck Donuts fries each of its signature vanilla cake donuts to order and coats, tops and drizzles to specifications. This can include a layer of cinnamon or powdered sugar or peanut butter or maple icing, toppings like chopped bacon, shredded coconut or Oreos, and a marshmallow or salted caramel drizzle, to list a few of the options. As a result, the location has 20 people on staff because it takes more manpower than the typical doughnut shop, she said.

“I think doughnuts have always been a part of popular culture in America and there are quite a few chef-driven doughnut shops in major cities,” she said, adding it makes sense that as San Diego becomes more and more of a foodie town, “these types of shops and trends follow.”

Founded in 2015 and with four employees, Devil’s Dozen serves about 150 customers on the weekends and up to 75 customers on any given weekday. Duehren said it uses the highest quality ingredients, down to the yeast in the dough and the chocolate used in the glaze. She also said Devil’s Dozen, which has a rooftop patio with views of the harbor, serves Café Virtuoso, which is locally-brewed and certified organic. According to Duehren, Devil’s Dozen’s total annual revenue is $1 million.

As a result of their popularity, today’s doughnuts are more than just a breakfast or casual dessert item. Both Aughinbaugh and Duehren said increasingly, they have guests come in wanting their donuts as centerpieces for their formal celebrations.

“They are great for parties and weddings because they are cute and small,” said Aughinbaugh. “We’ve done a few weddings, birthday parties, bar and bat mitzvahs — you name it.”

In Southern California, doughnuts have long been associated with the 9-by-9-by-4 inch pink boxes in which they have, for decades, been carried out. But what has been known as the pink-box culture locally is more than just the color of the doughnuts’ to-go box; it is also symbolic of the characteristics, processes and offerings behind the traditional neighborhood donut shop, including frying the donuts in batches hours before the stores open and the basic selection of doughnut flavors.

Pink boxes were popularized in the 1970s by Southeast Asian refugees who were settling in Los Angeles and surrounding areas, including San Diego, after escaping the Khmer Rouge regime in Cambodia and running many of the local doughnut shops. The soft-hued boxes became synonymous with doughnuts because store owners were opting for them as a more cost-effective option than the standard white boxes at the time.

As part of the new doughnut trend, even the boxes in which they are carried out in have changed. Devil’s Dozen and Duck Donuts, for example, both use brown cardboard boxes that have been designed to reflect their respective companies and with the brands’ logos on them. Neither Aughinbaugh nor Duehren count their doughnut shops as part of the pink-box culture.

In the next couple of years, Aughinbaugh sees the specialty donut shop trend growing and data backs her prediction. According to IBIS World, a Los Angeles-based market research company, the doughnut store industry grew by 3.4 percent in five years nationally to reach revenue of $16 billion in 2018. In the same time frame, according to the data, the number of businesses grew by 4.3 percent and the number of employees by 4.6 percent.

To further meet consumer demand, Aughinbaugh said she plans to open two more locations, at the very least, in the next few years in Southern California. The next one, she said, will have outdoor seating to better accommodate what she anticipates will be an increase in guests. She plans on launching a food trailer which will allow her to take Duck Donuts on the road to various locations, including nearby events like Coachella Valley Music and Arts Festival and Kaboo Del Mar music festival.