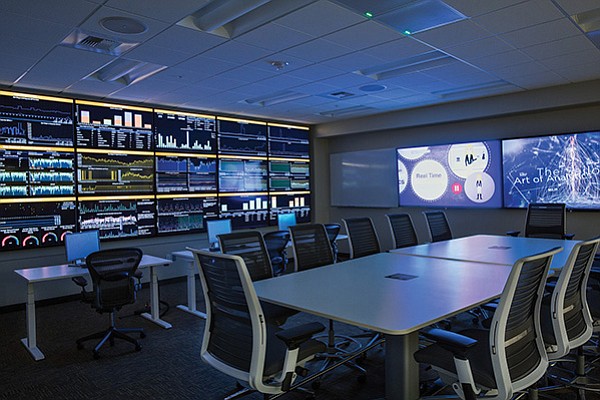 Teradata’s Rancho Bernardo campus features a room called ‘Pulse’ which provides a real-time look at data on the company’s operations, from the use of space in its physical buildings to the hours its employees are working. Photo courtesy of Teradata

The data warehouse company has been in the process of shifting its customers to a subscription-driven model for the past few years, since it began offering cloud-based reporting and data analysis.

For the quarter ending March 31, Teradata reported a 10 percent increase in recurring revenue, to $331 million, and a 55 percent decrease in perpetual licenses and hardware, to $31 million. The company said 72 percent of bookings made in the first quarter were for its subscription-based services.

“In the first quarter, Teradata continued its strong momentum, backed by increasing demand for Teradata Vantage, our game-changing platform that is helping the world’s leading enterprises get the answers they need for their toughest analytic challenges,” Teradata CEO Oliver Ratzesberger said in a news release.

In total, Teradata reported $468 million in revenue during the first quarter, an 8 percent decrease from the same quarter in 2018. It also reported a net loss of $10 million, compared to a $7 million loss in the same quarter last year.