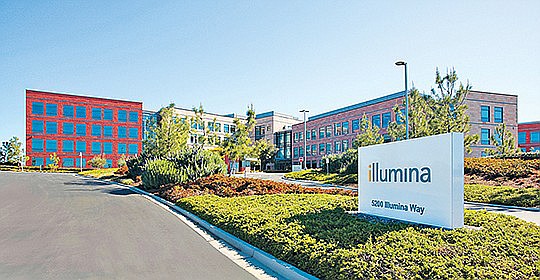 The common thread in these DNA realms: San Diego-based Illumina, maker of machines that sequence the lion’s share of genomes.

By recently inking a deal to acquire a smaller rival, Illumina has positioned itself to continue dominating the market. But potential competition is stirring, including in Illumina’s backyard.

San Diego companies like Roswell Biotechnologies share a goal of making sequencing more accurate and less expensive, in what could be a direct or indirect competitive threat. It raises the question: How firm is Illumina’s grip on the sequencing market?

Illumina delivers a comprehensive experience, from fundamental sequencing to data insight services. Analyst Puneet Souda said the company does this for a range of industries, giving Illumina scale that wards off competition.

“Illumina is able to serve multiple parts of the market very efficiently,” said Souda, who covers Illumina. “It gives the company a solid protection in that sense.”

Formed in 1999, Illumina’s reign atop sequencing can be traced to eight years later. Illumina bought Solexa, a company that pioneered what’s called sequencing by synthesis, a faster and less expensive method.

Illumina improved on the technology, while generating new patents. But the coming expiration of key Solexa patents could, in theory, open the door to competition. So said Shawn Baker, principal consultant at SanDiegOmics.com, a genomics consulting company. Baker started his career as a research scientist at Illumina.

“That said, even without the patents expiring, Illumina will likely start facing competition from other sources,” Baker said, referencing U.K.-based Oxford Nanopore Technologies, a company built on technology that differs from Illumina’s.

In San Diego, Roswell Biotechnologies, Singular Genomics and Omniome are pursuing DNA sequencing platforms. But it’s unclear whether they aim to go head-to-head with Illumina, target part of Illumina’s business or open up new markets.

“We are not at a point in our development where we think it would make sense to discuss for an article.  We do believe that by the end of this year or early next year we will be at a place to discuss,” an Omniome spokeswoman said.

Last year, Omniome landed a $60 million series B round to develop DNA sequencing that claims to be accurate, fast and at a low cost. Roswell and Singular did not respond to interview requests.

“Unless they’re raising money — and want to talk up the platform and technology to command better terms — there’s generally no advantage to talk about what they’re doing,” Baker said. “They’d just be tipping their hat to Illumina who could then respond, either with actual projects or just vague claims of what they’re working on for the future.”

Roswell in January pulled in a $32 million series A round to pursue a $100 genome test, seemingly putting the company in competition with Illumina.

Illumina helped drive down the cost of sequencing, which stood at $10 million in 2004 and is under $1,000 today. The company has said it has line of sight on the $100 genome, a milestone that would make sequencing commonplace in medicine.

“We are on an aggressive path to realizing the $100, 1-hour, clinical grade genome, to unlock the promise of precision medicine and usher in the DNA economy,” said Roswell CEO Paul Mola in a January news release.

Roswell is chasing this goal via DNA technology that integrates molecules into electronic circuits.

But achieving the $100 genome is only part of the competitive equation, observers said. More important: data accuracy, reproducibility and helping customers put data into action.

“Illumina didn’t lock itself into being just a sequencing company. They used their position in the market and cash on hand to build, quietly, this ecosystem that fuels demand creation and fulfillment,” Ribitzky said.

Illumina declined to comment for the article, only pointing to a recent presentation on the $100 genome.

Peeling Off, Putting Down Roots

Like Qualcomm Inc. before it, Illumina has reached a size where longtime employees break off for local startups. Indeed, the sequencing startups include ex-Illumina talent. (Other ex-Illumina employees have started ventures in genomics areas they say Illumina hasn’t touched.)

“It’s no different than Boston with biotech. Certain companies achieve a level of success, and at various points along the way individuals who were involved early on peel off and they get involved in the next generation of startups,” said Michael Pellini, managing partner of San Diego-based venture fund Section 32.

While Illumina is the 800-pound gorilla, Pellini sees room for other players.

“Across all industries, sometimes a dominant player emerges but with time and technological advancement, we start to see other opportunities in the marketplace. I suspect we’ll see the same thing in sequencing.”

Baker of SanDiegOmics.com said Illumina five years ago started to leave competition behind, including Life Technologies, which was acquired by Thermo Fisher. Illumina has sought to stay ahead by expanding its portfolio of sequencers.

At the low end is a $20,000 desktop sequencer that put sequencing within reach of more scientists. The nearly $1 million Novaseq 6000 is expected to one day unlock the $100 genome.

That was on revenue of $846 million, up 8 percent from the prior year period. The company said it expects full-year revenue growth in the range of 13 percent to 14 percent.

While San Diego companies have been quiet, the U.K’s Oxford Nanopore Technologies has publicly gunned for Illumina. Its latest platform is meant to rival Novaseq, though industry watchers have questioned whether the accuracy matches Illumina’s.

The companies have an odd history: Illumina in 2011 invested in Oxford Nanopore, but in 2016 sued the company for patent infringement. The case settled the same year.

As another way to dig a competitive moat, Illumina last fall agreed to buy smaller competitor Pacific Biosciences for $1.2 billion.

This would give Illumina a fuller view of the genome. It would also be a defensive move against Oxford Nanopore’s long-read platform.

Illumina expects the deal to close mid-year — but not so fast. The U.K.’s Competition and Markets Authority recently launched an examination over whether the acquisition would substantially lessen competition, a move that has the potential to at least delay.

It’s unfortunate, he said, because competition would only benefit sequencing.