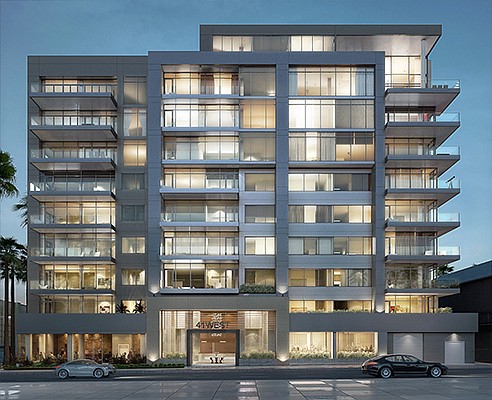 41West is the latest addition to high-end condominium developments in Bankers Hill. Rendering courtesy of 41West 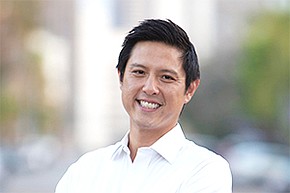 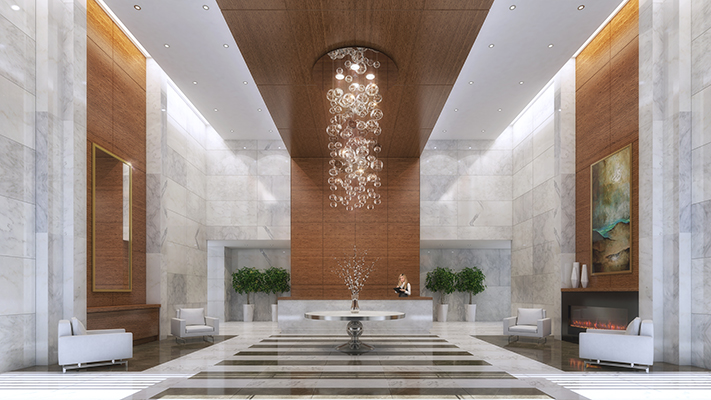 The lobby at 41West has extra-high ceilings and marble and wood finishes. Rendering courtesy of 41West

A gym and lounge just off the lobby are among the amenities at 41West. Rendering courtesy of 41West

So special is a top-floor penthouse in the latest pricey condominium project to hit Bankers Hill that developer A.J. Tangsoc has hired a marketing firm to sell just the penthouse, apart from the rest of the units in his 41West building.

He’s even given it a name – the Californian.

And the price tag, although not the highest in Bankers Hill, is special too at $4.7 million.

Just a few blocks away, Zephyr was marketing a penthouse in The Park condominium tower overlooking Balboa Park for nearly $6 million.

For the budget conscious, there’s a no-name penthouse across the hall from the Californian at 41West going for $4.5 million.

The Californian is pricier than 41 West’s three other penthouses because it’s got a better view, with wrap-around, ceiling-to-floor glass doors from Germany that open onto a balcony with a sight line that runs from downtown San Diego to the San Diego Bay and La Jolla in the distance.

Because the neighborhood is in the flight path to San Diego International Airport, the view from the west side of 41West is protected, meaning taller buildings can’t go up around it.

Estimated to cost about $60 million, 41West is 10 stories. The name comes from the number of units – 41 – and the west-facing entrance and lobby.

Other developers are eyeing Bankers Hill. City Mark Development recently completed XPO-Bankers Hill with 21 row houses at 575 Hawthorne St., and Foley Development has several projects in the neighborhood, including redevelopment of the former Daily Transcript building and adjacent property.

Bankers Hill “demographically is one of the strongest areas in the county. You tend to have very affluent residents, even in rental property,” said Kevin Mulhern, a senior vice president with the commercial real estate brokerage CBRE.

“If you were to compare it to any area downtown, it would be more comparable to Little Italy because it’s got the streetscape, the neighborhood feel,” Mulhern said. “You’re going to get a very diverse residential profile but it tends to be significantly older and more accomplished in terms of career situation than, say, downtown where you get a lot more millennials, particularly in the East Village.”

Tangsoc’s roots are in Vancouver, where his father, Alfonso Tangsoc, is CEO of Regent International and has developed several condominium projects.

At his father’s urging, Tangsoc said he came to San Diego to start his own company – Icon Properties – after working for a developer in Arizona.

He said San Diego is a good market partly because land prices here are far below what they are in Vancouver.

His other projects include an eight-unit condominium complex in Scottsdale, Arizona, and three townhomes in Pacific Beach – Parc Riviera.

41West is the first big project for Tangsoc, and one in which he has been intimately involved, down to researching the materials used in its construction.

“We really tried to build this to make people happy and realize that there is utility in living,” Tangsoc said.

The Californian penthouse is an example of that philosophy, with 3,995 square feet of space over two stories at the northwest corner of the building.

The master bathroom has marble walls and floors, a full-sized bathtub overlooking a private patio, an oversized separate shower and double sinks.

As in all of the units, the bathroom also has subdued lighting at ankle level beneath the sinks in what Tangsoc said was homage to his father, who left bathroom lights on for fear of falling during the night.

Smaller penthouse condos on the ninth and 10th floors go for $3.5 million on up.

“We understand that you’re not going to get an ocean view but you’re going to get a lot of space,” said Miguel Diaz, a realtor with DouglasElliman Real Estate who is marketing the penthouse.

Above the second floor, every unit has a balcony.

All of the condos have the floor-to-ceiling NanaWall bifold doors. The doors form the entire front wall in some units, and wrap around to include part of the side wall on a penthouse, so they give the condos the sense of almost living outdoors when opened.

All of the units come with Miele appliances, quartz countertops, Italian design cabinets, and built-in wine coolers with room for 34 bottles in the smaller condos and up to 128 bottles in the penthouses.

They also have 10-foot ceilings and hookups for gas barbecue grills on the patios.

The penthouse dining room in 41West. Rendering courtesy of 41West

Tangsoc is especially proud of the building lobby, designed by Awbrey Cook Rogers McGill architects of San Diego and designer Cristina Oberti of Vancouver, with a 24-foot ceiling and chandelier in the middle.

The idea is for owners to feel they are living in luxury from the moment they enter the front door, where they’re greeted by someone at the front desk – a concierge during the day and security guard at night.

Just off the lobby, there’s a 570 square-foot fitness center, a 608 square-foot lounge with a giant video screen that also is a golf simulator, and a 127 square-foot dog bathing room.

“Even the dogs are pampered,” Diaz said.

To make room for lobby ceilings that tall, Tangsoc said he built fewer condos on the second floor.

Every homeowner will have at least two parking spaces, and they’ve been wired for electric vehicle charging stations.

The extra wiring may not be a big deal to those who initially buy the condos, Tangsoc said, but it will increase the resale value.

The likely market for the penthouse is “that young business owner, entrepreneur that has boatloads of money and loves traveling the world,” Diaz said. “They haven’t hit Facebook money yet but they want to come down here.”

The penthouse and other units in 41West would be a good fit “for the couple who has kids who have moved out, maybe someone who is living in Rancho Santa Fe and wants to downsize,” Diaz said.

So far, there’s also been interest from people who live downtown, like an urban feel but find living in the heart of downtown a little too boisterous.

“I really believe Bankers Hill will be the next hot spot,” Tangsoc said. “It just makes sense for a lot of people.”

In marketing 41West, Diaz said he’s also promoting the neighborhood of Bankers Hill, which already has trendy restaurants and is adding more.

“It’s always been here. It kind of fell under the radar,” Diaz said.

41West is built on the site of a former restaurant – the Mandarin House – which was demolished, and adjacent to Britt Scripps Manor, a Victorian hotel built in 1887.

Of Chinese descent, Tangsoc said he liked the site in part because it’s on a hill and near water, which he said is considered a sign of good fortune in Chinese culture.

“Living on a hill near water is good Feng shui,” Tangsoc said.

Although 41West won’t be finished until June, about 60 percent of the units have already been sold, Diaz said. The Californian is among those still available.