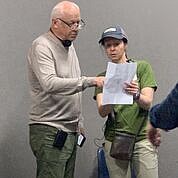 Options For All announced that in partnership with Joey Travolta’s film company, Inclusion Films, the team is preparing to direct Travolta’s first feature film in 12 years, “Carol of the Bells.” The film is intended to disrupt mistaken myths about adults with unique developmental abilities and characteristics.

Founded in 1985, San Diego-based Options For All serves individuals with intellectual and developmental disabilities, helping empower them to become fully participating members of their communities.

“Seventy percent of the crew will be made up of people with developmental disabilities who’ve been in our Inclusion Films’ workshop and its partners Futures Explored Inc. and Options For All’s film and media studio,” Travolta said.

“Working with Joey Travolta and Inclusion Films has been an inspiring collaboration for our team of young adults with intellectual and developmental disabilities,” said Nancy Batterman, CEO of Options For All. “This film will enhance our mission to achieve positive perceptions in the community and among employers about the value and abilities of these remarkable individuals.”

“Carol of the Bells” will premiere in May 2019 at the fourth annual Bentonville Film Festival in Bentonville, Arkansas.