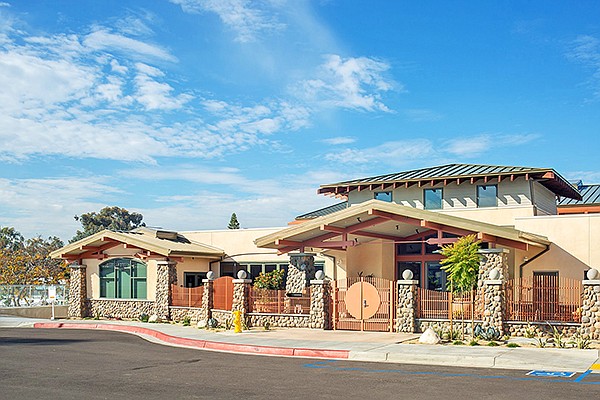 A $21.1 million new Mission Hills-Hillcrest Harley & Bessie Knox Library is both homage to the past and a warning for the future.

The homage comes from its craftsman-style design, modeled after that of many of the nearby homes.

The warning comes in the form of artwork that depicts what could happen in San Diego from climate change through three huge wheels anchored to the interior wall of the main room in the library. The wheels rotate, gradually unrolling spools of paper on which are painted an ocean, a reservoir and a wooded canyon. 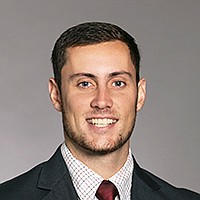 As the paper unrolls, the painted scenes gradually disappear, representing what could happen if climate change goes unchecked.

The library itself was particularly challenging for C.W. Driver to build because of its location on a small lot on a busy thoroughfare will little room to maneuver.

“That was definitely the most difficult,” said Daniel Tillett, assistant project manager for C.W. Driver.

Because the site was so cramped and on such a busy street, just getting materials delivered and dirt removed to provide two levels of underground parking was tough, he said.

The artwork, with each wheel weighing about 200 pounds, also was a challenge because an interior wall had to be reinforced with steel to hold it up, Tillett said.

Taking more than 25 years to become a reality, the nearly 15,000 square-foot library at 215 W. Washington St., adjacent to Florence Elementary School is but a few blocks from the one it replaces, which was built in 1961 and was about a third of its size.

The new library site was once an office building for the International Brotherhood of Electrical Workers and a parking lot. 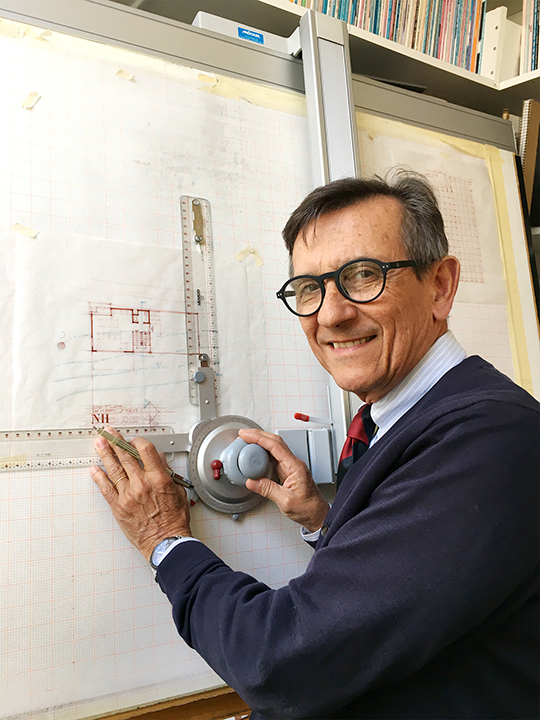 Manuel Oncina said that he modified the original design to make it “a more Mission Hills type of craftsman-style building.”

“A large component of that was the scale of the building, which we actually reduced on the front of the building and the side by lowering the height of the building to make it more pedestrian friendly, more accessible,” he said, with the final product about 26-feet tall at its peak.

“It was basically two stories right on Washington. We pushed it back so the face fronting Washington Street is now one story and the two-story part picks up about 20 feet behind that. That style was dictated by the community,” Oncina said. “We also took a stab at what they called the beacon, which was the tower of the elevator on the corner. We turned it into a lantern, a craftsman-style lantern.”

The purpose of the design was to give the building a more residential feel “in this strongly commercial neighborhood,” he said.

“Across the street and west of that, you’ll find this kind of feeling a little bit more where the buildings tend to be smaller,” Oncina said.

The library entry opens into a lobby with high ceilings, exposed trusses and trellises and a skylight to let in natural light.

“The idea is to make it as palatable as possible to make sure you don’t have any jarring aspects of the building,” he said.

A 1,600 square-foot children’s area has a computer lab and was designed with a special treat — a themed story-time area meant to resemble the Hobbit houses seen in the “Lord of the Rings” movies.

The warning built into the library comes from the work of Janet Zweig, a Brooklyn, New York artist, who developed and oversaw the installation that is mounted on an interior wall.

Three paintings on the faces of three four-foot diameter rolls of paper are driven by motors and attached to empty hubs. The paintings are by New York artist Kathyrn Goshorn.

Each painting depicts different San Diego settings — an ocean, a wooded canyon and a water reservoir.

The 28,000 feet of paper on each wheel unrolls at a speed of about a foot a day, in keeping with the speed of climate change, Zweig said. By 2050, about half of each roll will be unwound.

“I didn’t want it to unroll quickly because climate change doesn’t happen that way. It happens very slowly,” Zweig said, adding she will revisit the wheels in 10 years to determine if they should move slower or faster, depending on what’s happening with San Diego’s climate.

As the wheels turn, the paintings slowly disappear, becoming an abstract swirl of color as they’re taken up on the receiving hub.

The climate data Zweig used in her artwork was provided by David Pierce, a climate scientist with the Scripps Institution of Oceanography in La Jolla.

“To me, the artwork symbolizes how climate change is likely to alter the world to such an extent that decades from now, some aspects of our lovely San Diego landscape will be only memories,” he said.

Despite the dire images of Zweig’s artwork, Pierce said that “as pointed out in the descriptive panels of the work, how much climate change our region will experience depends on whether or not greenhouse gas emissions are reduced.”

Correction: This article has been updated to reflect the correct location of the library and name of its original architect.