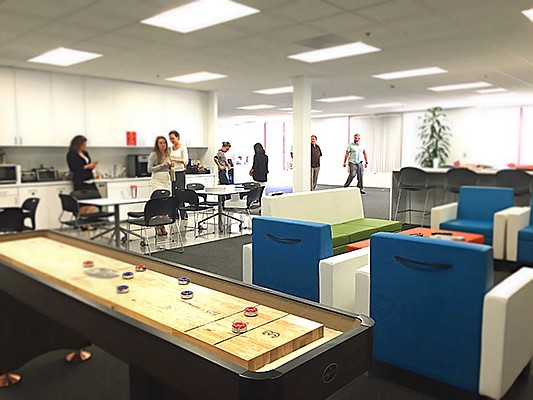 Kyriba’s UTC offices feature a lounge area with shuffleboard, plenty of snacks, and an espresso machine. The company is growing its staff in San Diego and worldwide, as it brings on more clients for its treasury and risk management software. Photo courtesy of Kyriba

“Bridgepoint will help us fulfill our mission of enabling CFOs and treasury executives to be more agile and efficient in managing their global cash and liquidity,” Kyriba CEO Jean-Luc Robert said in a news release. “In today’s complex and highly volatile business environment, finance leaders need real-time visibility and pinpoint control over their cash operations to maximize growth and opportunity.”

If the deal is approved, Kyriba would use the funds to build out its platform, including investing $60 million into product innovation. Daher Captial, Iris Capital and CEO Jean-Luc Robert would remain investors in the company, while Upfront Ventures, Bpifrance, Sumeru Equity Partners and HSBC, would get an exit.

“We are very pleased to be engaged with Kyriba in this next stage of growth. Kyriba is a fast-growing company with an impressive track record of double-digit expansion and is the global market leader in cloud-based treasury management software solutions,” Andrew Sweet, a New York-based partner at Bridgepoint, said in a news release. “With a market-leading offering and leadership position in the French and US markets, Kyriba is now well positioned to expand globally and we anticipate that further investment in R&D in particular will support its development in providing clients with comprehensive, end-to-end liquidity management solutions.”

The news came after a big year of growth for Kyriba, which added 229 new clients and passed $110 million in revenue in 2018. The company has plans for local expansion, including moving its staff in San Diego to a larger headquarters in UTC.

Kyriba previously had 50 employees in its San Diego offices, and now it has 120. By the end of the year, the company is on pace to have 200 local employees, and 1,000 worldwide.

The company will continue with its current strategy after the acquisition, and Robert will stay on as CEO.