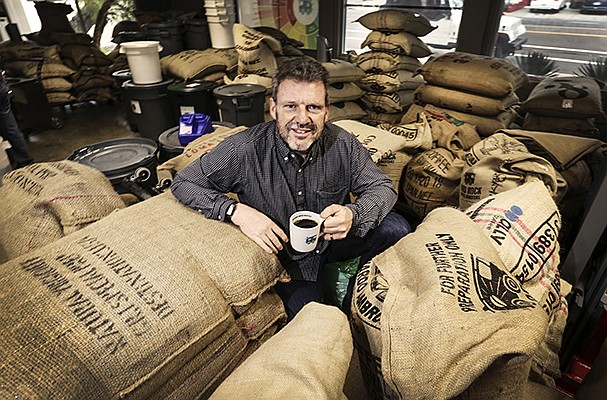 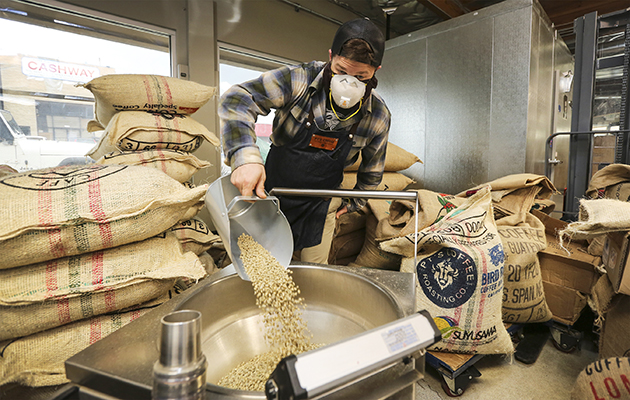 With Jeff Taylor as president, the sales of the privately-owned Bird Rock have doubled in the last two years. Here, roaster Brandt Rakowski measures green coffee beans to be roasted at the Morena Boulevard Bird Rock roastery.

It was a conversation with a very candid customer in the early 1990s that set Jeff Taylor, president and co-owner of Bird Rock Coffee Roasters Inc., out to find the best coffee in the world.

The man, in his 50s, had stopped by one of two PT’s Coffee Roasting Co. locations, which Taylor owns in his native Kansas. When Taylor asked him how he enjoyed his cup of joe, the gentleman indiscreetly responded, “actually, your coffee sucks.”

“I was devastated,” said Taylor, then 30. “It was then I realized business was good because it was a social phenomenon — there weren’t any other coffee shops in the neighborhood then. But the product just wasn’t good.”

At that point, Taylor made it his mission to make sure the coffee he was providing his customers was top quality. He first taught himself how to roast his own coffee. Then he began traveling to places like Guatemala, Colombia and Africa and forging direct-trade partnerships with the best coffee growers he could find.

It was a huge undertaking, but, for Taylor’s intents and purposes, it worked. Today, Taylor not only owns three PT’s Coffee locations, which recently received a 93/100 rating from Coffee Review, in 2017 he purchased San Diego-based Bird Rock Coffee Roasters for an undisclosed amount. In March, Bird Rock Coffee Roasters also received a 93/100 rating from Coffee Review.

“Our niche is that we curate the best coffee,” said Taylor of the company’s success. “Smaller roasters may not have the resources to do direct trade — it takes a lot of resources and relationships… We are able to go to the farms and see the conditions and all that…. Though I work with some importers to buy coffee — direct trade is our forte and we do that by finding the right farmers.”

With Taylor as president, Bird Rock has grown from three locations to six and the sales of the privately-owned company have doubled in the last two years. In February, Bird Rock signed a distribution deal that brought its products to all 27 Gelson’s Markets in San Diego, Santa Barbara, Los Angeles and Orange County. Bird Rock also signed a contract with Karl Strauss Distributing, a division of Karl Strauss Brewing Co., that will introduce Bird Rock Coffee Roasters nitro cold brew to over 100 restaurants and bars in Southern California. In mid-March, Bird Rock Coffee Roasters, in partnership with Santa Barbara-based Frinj Coffee, sold the first California-grown coffee. The varietal, a certified organic Cuicateco, scored a 92 from Coffee Review and sold out within hours.

“We got the only harvest this year for domestic, green bean sales,” said Taylor. “There were 500 pounds, but most of it was not available for sale. There were about 17 pounds left and we bought it. It sold out in record time.”

Lindsay Mesta, the co-founder and chief marketing officer of Frinj Coffee, said Bird Rock Coffee Roasters was the right partner to introduce the first California-grown coffee because of its meticulous operation and also because of its Morena Boulevard roastery location.

“They handle the coffee with such care and did a fantastic job roasting, clearly from the Cuicateco Coffee Review,” said Mesta. “Their location was the icing on the cake as far as being a great fit for showcasing the California coffee experience — they sit right in the middle of the largest coffee-growing region in our state. Twenty farmers and more than 25,000 trees are currently planted within 15-20 miles of the Bird Rock roastery.”

Taylor’s path to better coffee has not been an overnight success. When he began his search, it took him two years to perfect roasting. After realizing he needed to take his research one step further, he began traveling to various parts of the world to better understand the process. What he found was that disgruntled farmers just weren’t taking coffee-growing seriously because they were underpaid.

So, around 2001, Taylor and a handful of other coffee enthusiasts from around the world set out to encourage these growers so that they could get better coffee.

“In business, you try to cut costs. In our situation, we wanted to pay those farmers more so they would take better care of their coffee,” said Taylor, adding that at the time it wouldn’t be uncommon to get molded, defective cups of green coffee. “We started making arrangements, telling them, ‘if you take a small piece of your property — a micro lot — and make sure that the harvest and the process is perfect, I will give you $2.20 a pound,” verses the $0.47/pound farmers were typically paid then. “We wanted to see how good the coffee would be if we just started to take care of it.”

Around the same time, Taylor started to get involved with the Alliance for Coffee Excellence organization and its annual “Cup of Excellence” competition. The idea was to encourage growers to take a small piece of land and treat it like a child by nurturing it and taking good care of it, said Taylor, and then submit those beans to the competition. The Cup of Excellence would invite Taylor and others like him to rate the coffee and whatever coffee got the highest rating would be auctioned off to specialty coffee roasters, including Taylor, on the internet.

By going to the event year after year, Taylor began to meet the best coffee farmers in the world. His goal was to always meet the grower that won first place and then follow up with a visit to his/her farm. “I wanted to learn what they were doing to make their coffee so good and I wanted to buy the coffee,” said Taylor. “That is the beginning of how I got started buying coffee.”

In 2007, while in Nicaragua for a coffee event, he met Chuck Patton, founder of Bird Rock Coffee Roasters. During a conversation one night over beers, Taylor said to Patton if he ever wanted to sell his business, he’d love to make the move from Kansas to San Diego. In 2016, Patton called and by 2017, Taylor, with the help of friends who purchased half of PT’s, was able to acquire Bird Rock.

Taylor said he met Frinj Coffee’s CEO Jay Ruskey around the same time at another coffee tradeshow. After a trip to his Santa Barbara farm, where Ruskey has spearheaded the California coffee-growing industry, Taylor knew he wanted to work with him. When the opportunity to purchase and sell the first locally-grown coffee came about, it was a no-brainer, said Taylor.

“I see great potential in what he is doing,” he said.

And, Taylor continues to grow his business. Just a few days ago, he closed the deal on an internet-based coffee business called Craft Coffee, located in Brooklyn, New York. It was a good move for him, Taylor said, because the company was outsourcing its roasting. “Since we are a roaster, we can save money and make it more cost-effective for us to operate,” he said.

In the near future, Taylor said he hopes to open a few more Bird Rock Coffee Roasters stores, although he doesn’t have a vision for global domination. He just wants to sell the best coffee and have the best team, he said, not just have stores popping up everywhere like some of his competitors.

“I don’t work that way,” he said. “I look at what we have and who we are and what we can do next. I’ve been curating great coffee since 2001 — that is what gives us the unique ability to bring great coffee to our customers.”

And then, Taylor said, he hopes to take a vacation.

Clarification: This story has been updated to clarify a comment by Jeff Taylor about the use of the product from the harvest of domestic green bean sales this year.