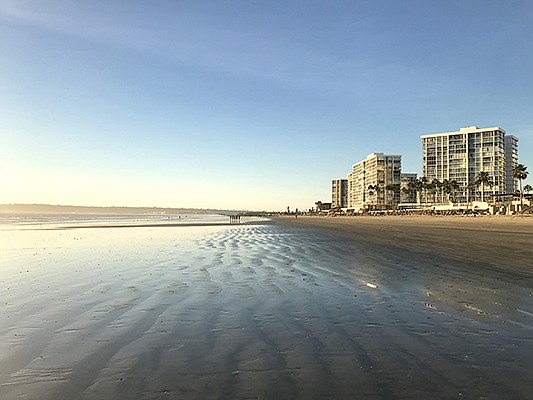 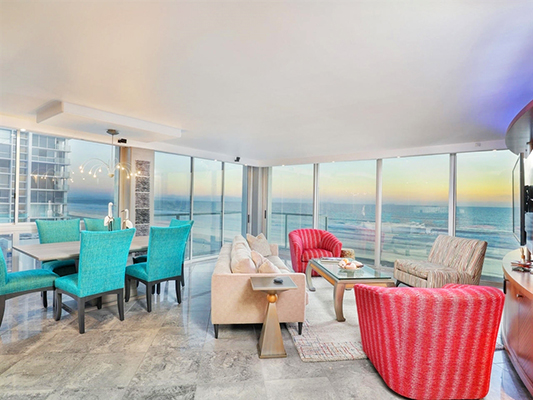 The living room of a corner unit at 1730 Avenida del Mundo unit 309 is listed at $3.299 million. Photo courtesy of Willis Allen Real Estate 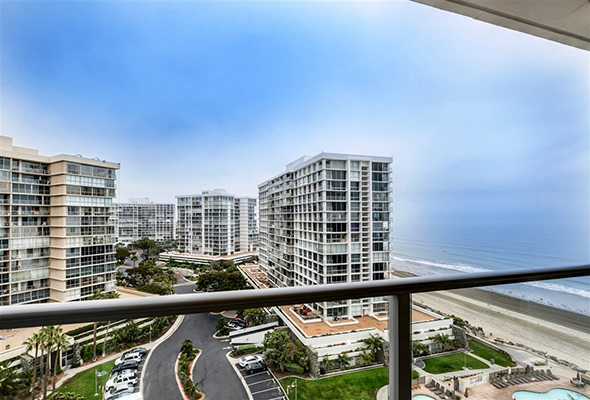 The view of the ocean from unit 100102. Photo courtesy of Willis Allen Real Estate

A distinctive feature of Coronado’s skyline for more than 40 years, the Coronado Shores high-rise condominium towers, adjacent to the iconic Hotel del Coronado, occupy some of California’s most prized beachfront settings.

Designed by famed modernist architect, William Krisel, the majestic towers were sited such that each unit would have a view of the ocean or the San Diego Bay, some with both. Krisel, best known as a prolific designer of the postwar housing boom, built pioneering mid-century modern homes. In a 2009 Palm Springs Life magazine story by Morris Newman, Krisel estimated that he had built more than 40,000 homes.

Other Krisel projects in San Diego County included more than 20 commercial properties, civic buildings, shopping centers and motels. Among his last projects in the county were the iconic Del Prado Condominiums built in 1972 across from Balboa Park and the Coronado Shores condominiums that he spent a decade (1969-1979) completing. Krisel died in 2017 in Beverly Hills at the age of 92.

The highest priced unit currently for sale is at 1780 Avenida del Mundo unit 609 and is listed by Olga Stevens, a realtor with Willis Allen Real Estate. The three bedroom and three-and-a-half bath residence is a corner oceanfront unit in the La Perla building with jaw dropping views of the San Diego-Coronado Bridge and the Pacific Ocean.

In the past 12 months, approximately 30 units have sold. At the top end a 3,250-square-foot unit sold for $5.175 million. Scott Aurich of Pacific Sotheby’s International Realty was the listing agent and Linda Kofler of the Coronado Shores Co. was the buyer’s agent.

When the towers were first built in the early 1970s there was much opposition to the project because of its proposed height. Concerned residents and environmentalists opposed the project and it met with fierce resistance. Built on the former “tent city” property south of the Hotel Del, where from 1900 to 1938, families would arrive from all over the country to vacation in the 100s of tents set up on 32-acres of sand right on the ocean. Many people attribute the existence of the Coastal Commission’s 30-foot height limit along the oceanfront to the opposition to the towers as well as that of other projects being proposed up the coast at the time.

The citizen initiative, approved by more than 60 percent of the voters in 1972, restricted the height of all buildings west of Interstate 5 to 30 feet. The initiative faced contentious legal battles and didn’t go into full effect until 1976. The result for the residents of San Diego County is a uniform coastline, accessible to all citizens with unobstructed views of the ocean as far away as the county’s most eastern edge.

As a result of height restrictions, the Coronado Shores Condominiums is a community that can never be built again anywhere along the California coastline. It’s reported to be the largest oceanfront condominium project in the state.

The layout of the community is not as dense as the much of the high-rise communities along the east coast. It was purposely designed to be aesthetically pleasing with large open spaces, grassy areas and meandering sidewalks. The goal was to ensure the best views possible from every residence by setting each building at a different angle.

Each residence has floor-to-ceiling windows that capture mesmerizing views in all directions. The corner units are particularly incredible.

Another practice over time is that some owners have combined two units into one large space. A current Willis Allen Real Estate listing was combined into a large 2,019-square-foot space to accommodate large family gatherings. The price is $2.825 million and is at 1730 Avenida del Mundo unit100102.

The community has four oceanfront pools, eight tennis courts, a private beach club, guard-gated security, a 24-hour doorman and a half-mile long sea wall. Each tower is governed by its own homeowner’s association and each has 15 residential and two parking garage floors.

It’s been reported that luminaries such as the late John McCain and his wife Cindy, Joe Garagiola and Orville Redenbacher have made the Coronado Shores their homes during the years.

Indeed, it’s luxury beach living at its finest with the added security and ease of being able to come and go whenever you want by simply locking the front door.