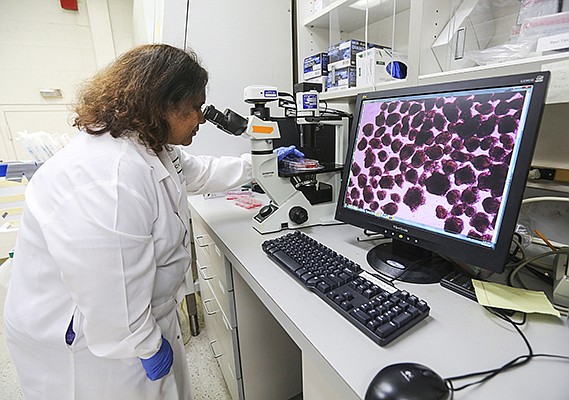 ViaCyte’s Senior Scientist Anindita Bhoumik analyzes cells in the company’s lab. The pioneering work in stem cell-derived therapy for Type 1 diabetes treatments has been a nearly 20 year journey for the company. The work has given the company a formidable IP portfolio. Photo by Jamie Scott Lytle.

Company description: ViaCyte is a pioneer in stem cell-derived therapy for diabetes. 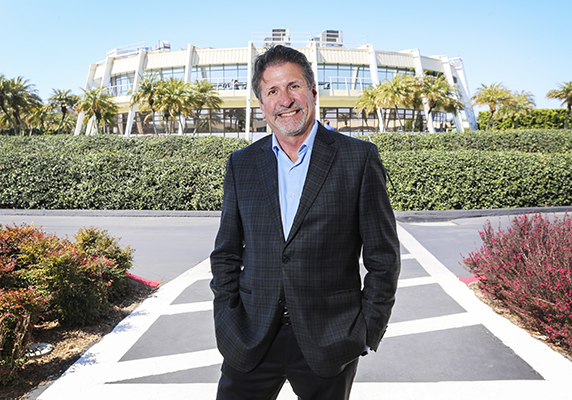 ViaCyte CEO Paul Laikind stands outside the company’s headquarters. Recently, ViaCyte locked down an $80 million funding round for work on a diabetes cure.

In 1998, researchers derived stem cells from human embryos for the first time. With the advance came the hope of curing Type 1 diabetes.

ViaCyte has been working on the dream for about two decades, but with fresh momentum. In November, the San Diego company raised an $80 million Series D round, led by Bain Capital.

The company’s long road, even by biotech standards, owes to trial and error that came with forging a path in stem-cell-based diabetes treatment. Observers said the company has a dominant position, afforded by being first in clinical testing, as well as 700 worldwide patents, in a space that could remake the diabetes industry.

It helps that ViaCyte’s technology is now in vogue.

“The rest of the world is kind of catching up to us. The interest in gene and cell therapy has exploded in the last decade, and especially in the last five years,” CEO Paul Laikind said during an interview at the company’s office in the Torrey Pines Mesa biotech hub.

Type 1 diabetes is a life-long condition, which can be fatal if not managed. It occurs when the immune system attacks the insulin-producing cells in the pancreas, requiring what can be an exhausting routine of insulin injections and monitoring.

ViaCyte has endeavored to make cells generating insulin that aren’t exterminated by the immune system. After pushing past challenges, the diabetes community is cautiously optimistic.

In the lab, ViaCyte starts with stem cells, deriving what later become insulin-producing cells. The cells are placed in a thin capsule, and once implanted in the body, the cells mature to regulate blood sugar levels.

“We knew we had some work to do,” Laikind said.

Clinical evaluation is expected to resume this year. All the while, another program called PEC-Direct, aimed at high-risk Type 1 diabetes patients, progressed.

“Because of that need for immune-suppression, that limits you to the high-risk patients who are at risk for things like severe-hypoglycemic events that put them into the emergency room,” Laikind said.

Initial results of PEC-Direct’s phase 1/2 clinical trial should be released this summer. Positive data would position the company for an initial public offering, being acquired or a licensing deal, Laikind says.

Competitors include Boston-based Semma Therapeutics. But ViaCyte is the only company with a stem cell-derived therapy for patients with Type 1 diabetes in clinical trials. The feat required mounds of paperwork to convince the U.S. Food and Drug Administration.

“ViaCyte has a dominating lead in the field,” said Timothy J. Kieffer, a molecular and cellular medicine professor at the University of British Columbia. He attributed this to a formidable intellectual property portfolio, made possible by being a pioneer in the field.

In addition, ViaCyte three years ago consolidated its position. In a deal with Johnson & Johnson, Viacyte absorbed rival BetaLogics.

Kieffer’s team has taken part in a ViaCyte clinical trial, but as part of the independent research the team didn’t receive any funding from the company.

The dream of curing Type 1 diabetes emerged in 1998, and two years later looked closer to reality when patients became insulin independent thanks to University of Alberta researchers.

But only half of patients were able to stay off insulin. Patients also required drugs for life, and the university’s work demands islet cells from tough-to-source donated pancreases. So, the hunt for a cure continues.

But ViaCyte’s cell therapy isn’t the only technology that promises to shake up the diabetes industry. Diabetes monitoring companies like San Diego-based Dexcom have moved toward “closed loop” systems, which automatically deliver insulin based on readings from wearable glucose sensors.

Kieffer, who contributed to a recent paper about the two paths in the journal Cell Metabolism, said each has its pluses and minuses. Nearer term, he believes closed loop will drive the industry, which could eventually be overtaken by cell therapy.

ViaCyte was founded in 1999 as Novocell, which merged five years later with CyThera and BresaGen.

While a leader, after nearly two decades of research and development, ViaCyte is still a ways away from a commercial product, assuming FDA approval. But Laikind reminded of the lengthy timeline of biotech development. Especially when a pioneer.

It was only two years ago the FDA approved the first gene therapy, after more than three decades of trial and error in the space, he pointed out. Monoclonal antibody drugs likewise took years to arrive.

“Cell therapy is very similar. We’ve been plugging away at it for a long time,” he said.

Along with private investment, ViaCyte has received financial backing from the California Institute for Regenerative Medicine and JDRF, an advocacy group for diabetes research and medical research reforms.

ViaCyte’s grinding effort — and first-of its-kind clinical trial — will be captured by an upcoming documentary, called “The Human Trial.” Outside his office, Laikind pointed to a poster of the film.

But the company hopes this story is just getting started.

The article was updated to clarify Laikind’s quote, in which he stated: “Because of that need for immune-suppression, that limits you to the high-risk patients who are at risk for things like severe-hypoglycemic events that put them into the emergency room.”