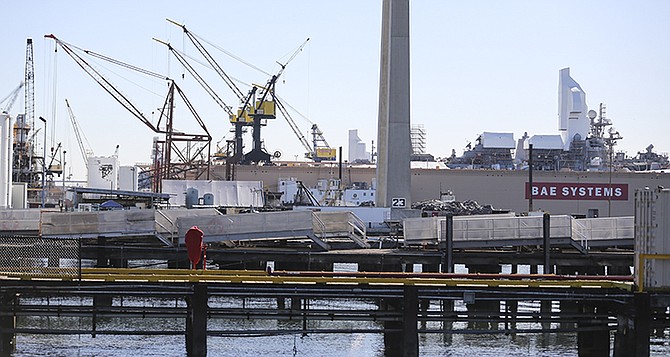 The upper parts of a U.S. Navy ship protrude from a BAE Systems dry dock, at right. The Pentagon has sent a proposed budget for ship repair and other spending to Congress. File photo by Jamie Scott Lytle

But the budget for the fiscal year that begins in October is just a pencil sketch. Congress will likely call for many changes, and the negotiations have barely begun. Some see the budget as a political statement, teeing up debate for the 2020 presidential election.

The way through Congress will be tough because the defense budget document includes some divisive issues, including funds for a wall on the U.S.-Mexico border.

Defense spending is a significant part of the San Diego County economy, supporting an estimated 1 in 5 jobs. In 2018, $9.4 billion in procurement contracts flowed into the county, according to a recent study from the nonprofit San Diego Military Advisory Council. Defense contractors employ thousands. The 2020 budget blueprint calls for $718.3 billion in U.S. Department of Defense spending and a total of $750 billion in national security spending.

It’s not just one budget at the Defense Department. In addition to the basic Pentagon budget proposal, there is a plan for the separate warfighting budget, known in Defense Department lingo as OCO (for Overseas Contingency Operations). On top of that there is an emergency budget proposal. Both the OCO and emergency requests add up to $173.8 billion.

The emergency budget of $9.2 billion includes funding for military construction in response to emergencies, to include border security and the repair of facilities damaged by Hurricanes Florence and Michael.

The Pentagon has billed its budget as the largest budget request in more than 20 years for shipbuilding.

In all, the Pentagon seeks $34.7 billion in ships.

Looking ahead, the five-year budget plan calls for another Lewis B. Puller class expeditionary sea base ship to be built in fiscal 2023.

The proposal calls for building the fourth Gerald Ford-class aircraft carrier, which has yet to be named. Budget documents mention advanced aircraft launch and recovery systems built by locally based General Atomics, saying the systems offer “enhanced capability with reduced manning.” The systems rely on new technology, and they have their critics.

Funding for ship repair appears in the OCO budget, which differs from usual practice. “It will be interesting to see how Congress reacts to that,” said Derry Pence, president of the Port of San Diego Ship Repair Association.

Northrop Grumman (NYSE: NOC) stands to gain slightly more than $1 billion from the Global Hawk program in the fiscal 2020 budget proposal. Some $521.3 million would go to procure two systems for the Navy (a version called Triton). Some $438 million would go toward R&D on both the Navy and U.S. Air Force models. Global Hawk is an autonomous, high-altitude aircraft that gathers intelligence. The program is based in Rancho Bernardo, though aircraft are built in Palmdale.

General Atomics Aeronautical Systems Inc. stands to gain roughly $1.15 billion in unmanned aircraft work, mostly on the MQ-9 Reaper, and to a lesser extent, on the MQ-1 Predator. GA-ASI designs, builds and supports the aircraft in North County.

The U.S. Marine Corps proposes to buy three MQ-9A Reaper aircraft for $77 million under the plan, in the warfighting (OCO) part of the budget.

The Air Force budget plan calls for spending $764.8 million for 12 MQ-9A Reaper aircraft, ground control stations and modifications to extend the range of already-delivered Reapers. Some $175 million would go toward research and development. The Reaper can serve as a spy aircraft or be a strike platform, delivering missiles or bombs.

The budget spells out military construction projects such as improvements to the airfield at Naval Air Station North Island and Pier 8 at Naval Station San Diego.

Less information is available on the military electronics programs at the core of many San Diego County businesses. 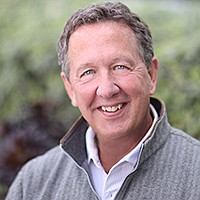 Infrastructure as a service has not arrived, but the 2020 budget proposal contains “significant steps in the right direction,” Peterman said. 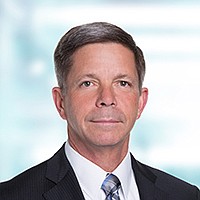 John Roberti, vice president of government relations and strategy for San Diego-based Cubic Corp., said he sees opportunity for Cubic’s electronics and training businesses in the 2020 budget proposal. Military training is increasingly electronic and in some ways resembles video games. The Army budget, for example, calls for $136 million for R&D on its Synthetic Training Environment, and Cubic (NYSE: CUB) might go after some of those funds, Roberti said.

The Pentagon spending plan contains $9.6 billion in total cybersecurity spending. A fraction of that will likely go to SPAWAR, the Space and Naval Warfare Systems Command of San Diego, which employs large and small businesses.