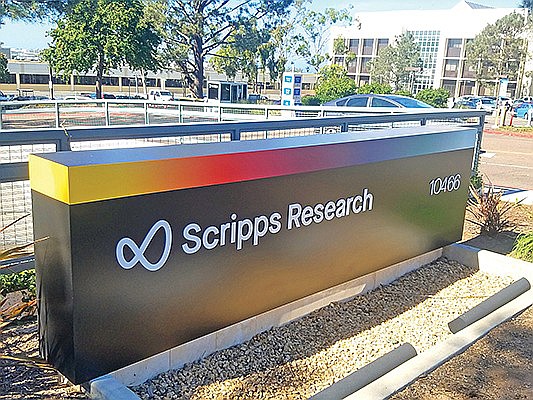 The outside of Scripps Research, which would gain surer financial footing if ozanimod is approved. Photo courtesy of Scripps

Scripps Research stands to gain a royalty windfall from a drug candidate that slows brain atrophy in patients with multiple sclerosis.

Pharmaceutical Celgene appears to be nearing the finish line with ozanimod, which originated at La Jolla-based Scripps and is expected to be a blockbuster drug.

On March 11, Celgene filed for regulatory approval of ozanimod in the European Union. The company will do the same in the U.S. shortly.

Celgene is also testing the drug in ulcerative colitis, an inflammatory bowel disease.

If approved in both disease areas, Celgene several years ago forecast the drug could reach $4 billion to $6 billion in peak sales annually, an estimate analysts have since said is too high.

Scripps Research would get a 2 percent cut, so even $1 billion in annual sales would net the nonprofit $20 million a year.

The injection would be a welcome boon to Scripps, known for innovative treatments — along with financial struggles in recent years.

The nonprofit isn’t just banking on ozanimod to improve the balance sheet, though.

The nonprofit has also sought to boost private fundraising, an area of competitive weakness, bond analysts have said.

Given the long path of drug development, revenue from ozanimod has been a long time coming for Scripps.

In 2002, a Scripps researcher began working on the technology behind ozanimod.

Receptos, which started in San Diego and sold to Celgene for $7.2 billion, licensed the technology in 2009.

Celgene’s initially asked for regulatory approval of ozanimod in multiple sclerosis a year ago, but in a major setback, the U.S. Food and Drug Administration asked for additional information.

A company official at the time pinned the blame on Receptos. Not long after, former Receptos CEO Faheem Hasnain forcefully pushed back against the Celgene executive’s comments in an interview with the San Diego Business Journal.

Hasnain is now the chairman of fast-growing biotech Gossamer Bio.