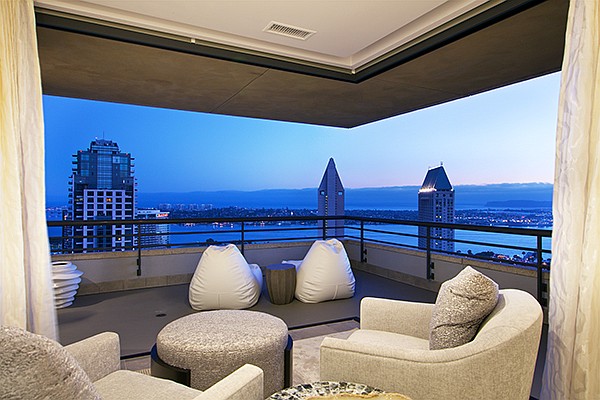 The view from the master bedroom patio in a condominium at 700 Front St. in the Meridian residential high-rise building in the Horton Plaza District. Photo courtesy of Pacific Sotheby’s International Realty 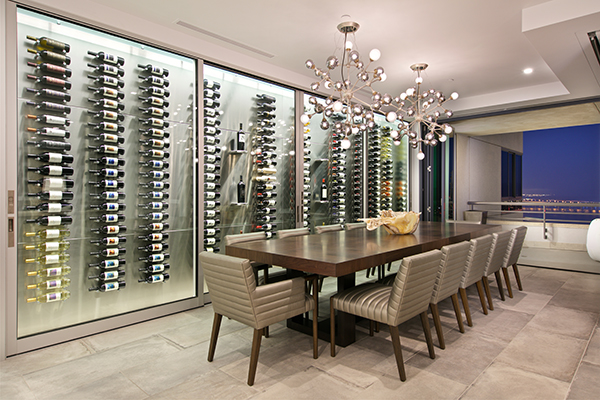 The unit is being sold fully furnished with all accessories, including a 218-bottle, $50,000 curated wine collection. Photo courtesy of Pacific Sotheby’s International Realty 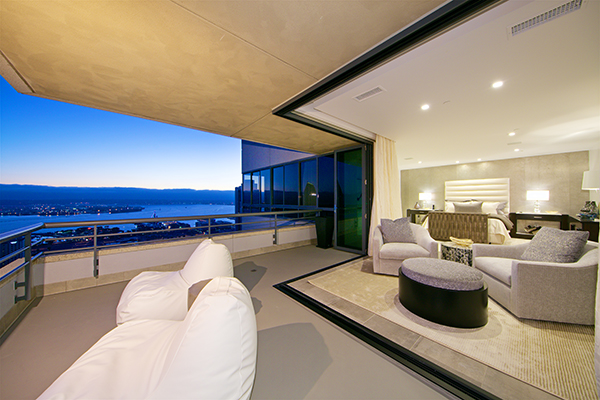 The view from the patio into the expansive master bedroom suite. Photo courtesy of Pacific Sotheby’s International Realty 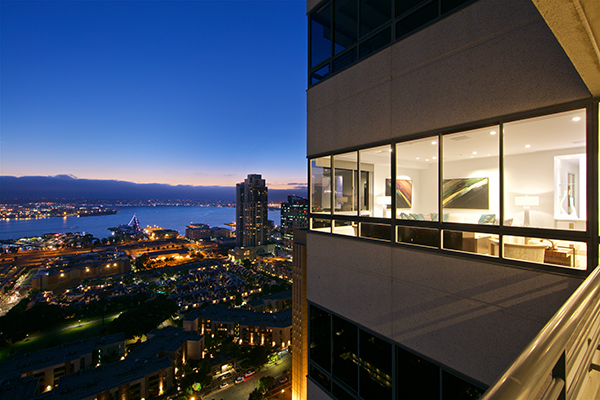 A shot of the interior from an adjacent patio at dusk. Photo courtesy of Pacific Sotheby’s International Realty

In boom times and bust, the somewhat rocky metamorphosis of downtown San Diego from a commercial district to a dynamic and diverse place to live and work is remarkable. The burgeoning city is nestled along San Diego Bay and is alive with cruise and cargo ships coming and going, the comforting presence of the U.S. Navy’s aircraft carriers, sailboats gliding gracefully through the water, people strolling along the waterfront and restaurants galore — among just a few of its attractions.

Downtown San Diego is undoubtedly one of the most impressive in the world. The graceful arc of the San Diego-Coronado Bridge leads the eye over city lights and marinas to Point Loma’s dramatic cliffs off in the distance and the lure of the open ocean beyond.

Few people are more familiar with downtown’s residential market than Raye Scott and her partners Francine Finn and Sarah Scott, of Scott-Finn & Associates affiliated with Pacific Sotheby’s International Realty. The partners have the listing on a newly remodeled condominium in the 28-story Meridian building in the Horton Plaza District at 700 Front St. Unit 2502. It’s a three-bedroom, three-bath, 3,050-square-foot home. The listing price is $5.75 million.

Built in 1985, it was among the first high-rise residential towers to be built downtown since 1927 when the El Cortez Hotel (now on the National Register of Historic Places) was built. The Meridian is a modern architectural style designed by Maxwell Starkman & Associates.

Scott, a San Diego resident since 1974, has lived and worked in the North County coastal area for 30 years and has witnessed firsthand downtown’s recovery from the “Great Recession” of 2008.

“I moved downtown in 2003 from Del Mar into Park Place, which was brand new construction,” Scott said. “At that time there were 19,000 people living downtown, it’s almost doubled now.”

The 30-story Park Place condominium building was completed in 2003 by Bosa Development Corp. and was designed by Canadian-based architects Dikeakos & Cotter. Bosa is noteworthy among the major players in the explosive growth and changing skyline of downtown.

“The next generation of buildings, the next real boom was when Bosa came to town and started scooping up all the prime lots.” Scott said. “You can see in the progression of his construction, each time he refines it and gets better and better.”

Scott said when first contacted by an attorney for the owner of the condominium in the Meridian, she and her partners knew it was a tremendous opportunity.

Nothing had been done to the unit since it was purchased in 1986. The team knew immediately it would be a perfect investment for one of their clients who enjoys taking a unit and stripping it down to its bones to put his vision and original stamp on it. The investor is a resort developer, but Scott said these projects are more of a labor of love for him.

“Everything he touches is three steps beyond what anyone else would do in terms of the quality of materials.” She said. “He’s very meticulous.”

The remodeled unit has never been lived in and Scott refers to it as the “masterpiece of the Meridian.”

“The listing price includes every single thing that’s shown in the photos,” Scott said. “The furniture was custom made, the chandeliers were custom made, the doors; it includes all accessories, all of the art and $50,000 of fine curated wine in the 218-bottle one-of-a-kind, climate-controlled wine vault.”

Scott said the value of this unit on a price-per-square-foot measure, given the inclusion of the items that are part of the sale, is “very reasonable for the luxury consumer, this is probably the best product downtown, there’s just nothing else like it.”

Solana Beach-based Wardell Builders Inc. did the remodel with a long list of high-quality amenities and extreme attention to detail such as custom LaCANTINA zero 90-degree corner stacking bi-fold doors (at the cost of $100,000 for each patio), Level 5 drywall (the highest degree of quality in drywall finishing), doubled-paned windows to block noise from the street and Savant integrated shade pockets — 25 stories above it all.

Brea-based Talbert, Helms & Eccles Interior Design LLC designed the furnishing and accessories in the open concept floor plan in a sophisticated, contemporary style that creates a tranquil, welcoming environment focused on the extraordinary views from every room.

“I love showing this unit, I love the opportunity to see it when we get to show it.” Scott said. “Especially at night, you get the whole city, all the lights, it’s magical up there, it really is.”