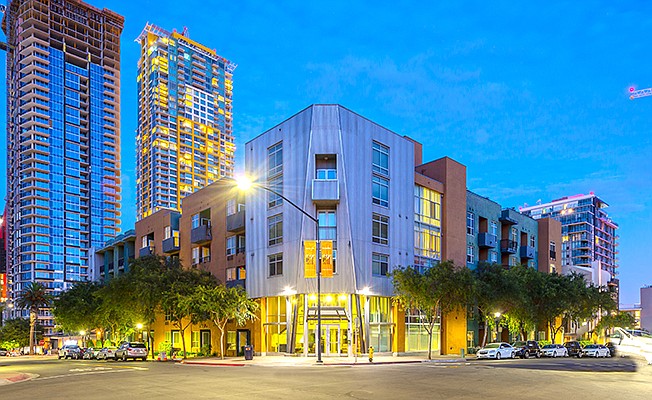 An East Village building that was used for student housing has been sold and will be renovated. Photo courtesy of Moran & Co. 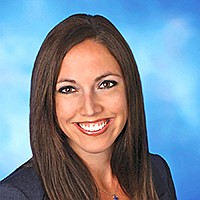 An East Village apartment building that was used as student housing for Thomas Jefferson Law School has been sold for $46.6 million.

Entrada Apartments, 453 13th St., was bought by Ideal Capital Group, headquartered in the Fresno County city of Clovis, with plans to renovate the building.

Thomas Jefferson Law School relocated from its campus at 155 Island Ave., last year as part of a downsizing move.

The law school in July signed a long-term lease on two floors of space in a 24-story office tower at 701 B St. owned by Emmes Realty Services.

Entrada Apartments was sold to Ideal by SP RGA, a partnership between Security Properties and ReCap, a Reinsurance Group of America company.

She said Ideal will rebrand the property and redo the exterior of the building with new façade colors and lighting, upgrade equipment in the gym, and upgrade an interior courtyard.

“The growth in San Diego’s downtown market over the past decade, especially in East Village, is unprecedented compared to anywhere in San Diego County,” Parsons said. “Downtown remains the most desirable rental market in San Diego due to the 24/7 life-work-play environment as well as its immediate proximity to San Diego’s top attractions and lifestyle convenience adjacent to the airport.”

Entrada was one of the first apartment projects built in East Village, which has undergone a surge in new construction including several apartment towers that have transformed the former warehouse district into an artsy, hip neighborhood.

Since Entrada opened, 6,648 apartments have been built downtown, increasing the market inventory by 79 percent, Parsons said.

“Entrada presents Ideal the opportunity to transform a centrally located but underappreciated asset into a premium, highly amenitized value option for those looking to live in the East Village,” said Austin Herzog, the company’s president.