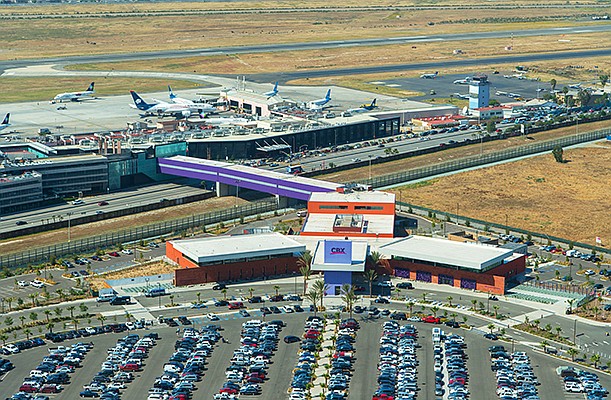 At the U.S.-Mexico border, Cross Border Xpress, also known as the CBX bridge, is helping those traveling through Tijuana International Airport (TIJ) seamlessly enter and exit the United States.

Launched in 2015, CBX is a one-of-a-kind 390-foot-long pedestrian skybridge that, while complying with all U.S. regulations, connects ticketed passengers traveling through TIJ to and from a terminal — a standalone building — in San Diego. For $16 per person each way (or $30 roundtrip or $12 per person each way if traveling as a family), CBX allows passengers to avoid long lines at San Ysidro and Otay Mesa ports of entry and cross the U.S.-Mexico border in as little as 15-20 minutes.

Not only is CBX, a $120 million, privately funded project, providing TIJ travelers easier, more streamlined access to and from San Diego, it is also impacting the San Diego economy, according to CBX CEO Jorge Goytortua.

“In our first three years of operation, CBX saw five million users cross the bridge. Last year alone, we had 2.26 million users on the terminal,” said Goytortua. CBX has seen a 30 percent to 40 percent growth since inception, he said, handling around 5,000 passengers on any given day. In 2018, the number of users grew by 18 percent, and, in 2019, Goytortua says he anticipates that figure will increase 20 percent.

Goytortua says the bridge sees three types of travelers: those of mostly of Mexican origin, who travel down from Southern California to parts of Mexico on break; the leisure customers who are traveling from Mexico to vacation in San Diego; and the VFR market travelers, also known as the “Visit Friends and Relatives” group, who travels back and forth between Mexico and the U.S. to visit family and friends. Some 250,000 to 400,000 CBX users came to San Diego to visit friends or on vacation in 2018, said Goytortua. He says 74 percent of total CBX users stay in the San Diego region.

“They rent cars, they rent hotel rooms, they eat at restaurants and go to the attractions,” said Goytortua. “So, even though there is no firm number, the CBX bridge is certainly generating a heavy impact on the tourism activity here in San Diego.”

Kerri Kapich, chief operating officer at the San Diego Tourism Authority, says the office has been working diligently to encourage users to spend even more time in San Diego.

“We have been working with CBX to better understand the arrival process… and working with the airlines so that when people are coming to Tijuana International Airport, they see Tijuana/San Diego as a destination,” she said, adding they get the message out through materials distributed to travel agents and tour operators in Mexico to show people how easy it is to get to San Diego. This information is also provided to other agents in other parts of the world that may have travelers flying into Tijuana instead of San Diego International Airport, so that they understand there is another access point.

While Kapich says CBX isn’t collecting data on visitors and their patterns, she says studies show most people crossing the CBX bridge are most likely to stay in San Diego versus traveling up to Orange County or Los Angeles. And that visitors from Mexico who stay in hotels normally stay three-and-a-half nights in San Diego.

Goytortua says there are various incentives for traveling through TIJ, which served 7.8 million passengers last year, including that it provides six carrier options that fly to a collective 35 Mexico cities and also to Shanghai and Beijing. Another reason is that prices are “much more competitive for customers than they are in the U.S.,” he said, adding that international taxes are at least $50-$70 higher than domestic taxes. He said TIJ offers around 80 flights a day and services more cities in Mexico than SAN does.

While it took CBX seven years to get the legal permits to operate as well as build out the bridge, today it employs nearly 250 directly and close to 400 indirectly. About 50 of those are U.S. Customs and Border Patrol (CBP) agents, who help fulfill all U.S. requirements in terms of safety, according to Goytortua. He said passengers can check their bags on the U.S. side and drop them off on the Tijuana side and the terminal provides services such as food and beverage, shuttle options, car rentals and a duty free shop on both ends of the bridge.

CBX got started when a private, cross-border investment group from Mexico and the United States bought land in Otay Mesa in hopes of better connecting passengers traveling through TIJ from both sides of the border. The group includes Laura Diez Barroso, president of Grupo Aeroportuario del Pacifico (GAP), Juan Gallardo from Grupo Azucarero Mexico, Eduardo Sanchez Navarro, a businessman that has largely invested in Cabo, San Lucas, and Chicago-based billionaire developer Sam Zell.

This year, to meet its growing demand, CBX will undergo a $10 million expansion that will go toward the customer service aspect of the terminal, including expanding the federal inspection area, the departures lobby and access to the bridge and the addition of more restrooms. In addition, in the next year, Goytortua said CBX will undergo a “very aggressive land development” plan.

“We have 43 acres of land” on the Otay Mesa-site, he said, adding CBX is in talks with various U.S.-based developers and already has a permit for a larger parking lot, a gas station and a 370-room hotel, among other amenities.