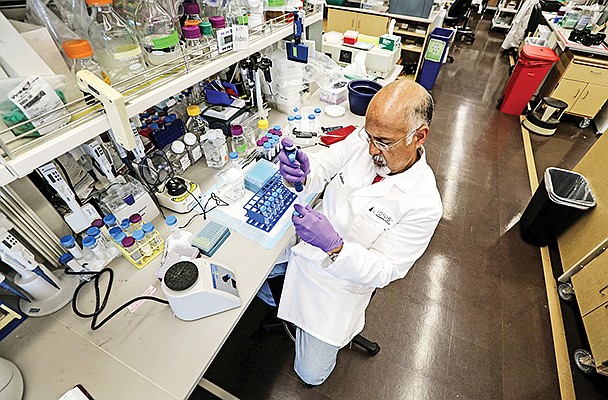 Research Assistant Andres Berdeja works at one of the Ionis labs in Carlsbad. File photo by Jamie Scott Lytle

Carlsbad-based Ionis Pharmaceuticals has landed yet another big payout.

Pharmaceutical giant Novartis will pay $150 million to license a cardiovascular drug from Ionis, it was announced Feb. 25. Ionis and its spinout Akcea Therapeutics will share the payment.

Novartis picked up the rights to Akcea-Apo(a)-LRx, a drug candidate intended for elevated levels of lipoprotein (a) that can’t be reduced by diet or exercise and that contribute to risks like blood clots. The large pharmaceutical will handle a phase 3 clinical study, and if the drug is approved, global commercialization.

“We believe that this therapy has the potential to be a significant advance for millions of people affected by cardiovascular disease around the world,” said Paula Soteropoulos, chief executive officer at Akcea.

The drug was discovered by Ionis and co-developed by Akcea and Ionis. The $150 million will go to Akcea, which will pay Ionis $75 million in common stock.