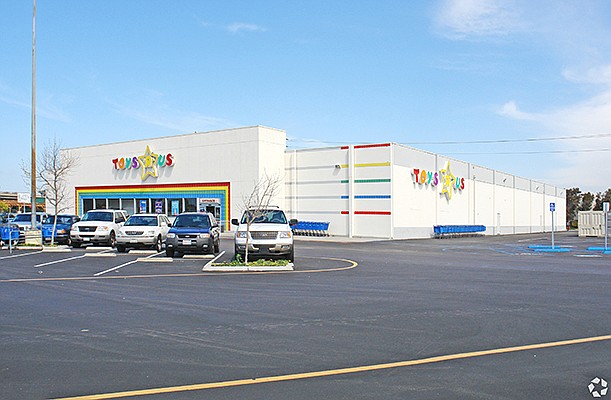 A former Toys R Us store on Morena Boulevard may be redeveloped as apartments. Photo courtesy of CoStar

Big-box retail spaces that once were home to such retail giants as Sears and Toys R Us are proving to be a hot commodity in San Diego County.

Depending on their location, most are snapped up quickly, renovated and reopened — often with several tenants taking the space.

The demand for big-box space comes as retail in general is prospering in the county, as companies adjust to accommodate e-commerce.

The San Diego County retail market softened in the fourth quarter of 2018, but commercial real estate brokers are optimistic that 2019 will be a good year with a flurry of new high-end and low-end retailers ready to open and more on the way — including more than a dozen retailers and restaurants in Kilroy Realty’s One Paseo development in Carmel Valley.

Former big box sites are especially attractive in San Diego County because there’s not a lot of land left to build new stores from the ground up and the demographics of the region with a strong economy and fairly affluent workforce make the county a good location for retail.

“They are being absorbed. The majority are being backfilled by other tenants in the market, maybe some of them are being chopped up and absorbed that way,” said Richard Lebert, a senior vice president of Colliers International in San Diego.

“There are a few instances where those properties might have the zoning to allow for multifamily,” Lebert said.

For example, Lebert and Reg Kobzi, a senior vice president of CBRE, said a former Toys R Us store in San Diego on Morena Boulevard is a likely prospect to be redeveloped for apartments.

“There are probably other sites that are being looked at,” Lebert said.

According to a recent report by CBRE, there were 29 big-box retail spaces vacant in San Diego County in February, with a total of 884,021 square feet of space.

“There has been movement on some of these spaces already, mitigating the fear that they would sit vacant,” CBRE reported.

Closed Toys R Us stores accounted for more of the vacancies in San Diego than any other retailer, with empty stores in La Mesa, San Diego, Oceanside and National City totaling nearly 150,000 square feet, according to CBRE.

North County had the most vacancies — nine for 252,651 square feet of space.

Among the big box conversions cited by CBRE were plans by The Lot, a high-end movie theater and restaurant chain, that is set to open new venues in Del Mar and Scripps Ranch, and Equinox, a fitness center, is taking 33,000 square feet of space in a former Sears store in UTC.

Another former Sears at El Cajon’s Parkway Plaza is being redeveloped with a variety of retailers taking portions of the space and plans are in the works for a similar redevelopment of a Sears store in the Chula Vista Center mall.

“The retailers are looking at the boxes because their sales are up,” said Kobzi. “Everything’s pointing in the right direction,” with 2018 a strong year for retail.

Kobzi said 19 former big-box stores in San Diego County were renovated and put back in use in 2018, and five deals are already pending in 2019.

In San Diego County, health and fitness operations, discount retailers, and entertainment venues have been the most common ways former big-box stores have been reused, said Chad Iafrate, a senior director with Cushman & Wakefield.

“Between entertainment, health and fitness and value soft goods retail, those are kind of the four most active categories,” Iafrate said.

Along with the scarcity of land for new construction and a strong customer base, geography is another factor in the attraction of big-box spaces and the ongoing success of retail in the county.

With San Diego hemmed in by the Pacific Ocean to the west, mountains to the east, Mexico to the south and Camp Pendleton to the north.

“We don’t have urban sprawls like other cities like L.A. and Phoenix and places that are built on a grid system,” Kobzi said. “They can keep growing and growing and nothing stops them.”

Yet, even in San Diego County, there are exceptions to the appeal of big-box spaces.

Sites that are on the periphery of the county’s population centers can be a hard sell, Iafrate said.

“Those submarkets are seeing vacant stores just sit idle,” he said, citing a former Albertsons supermarket in the Eastlake neighborhood of Chula Vista and sites near Camp Pendleton as examples.